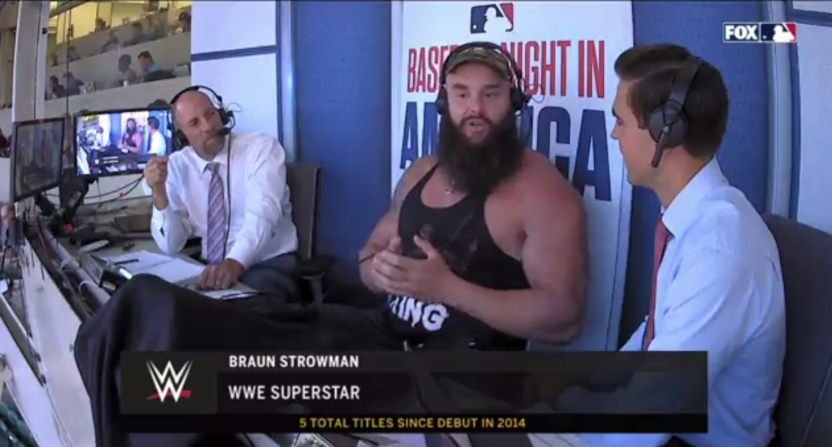 Corporate synergies, vertical integration, in–house promos…there are all sorts of ways for networks to try and promote assets owned by other branches of their corporate structure, and we see all of those quite a bit. But that sometimes gets awkward when Thing A is being promoted on Thing B and the Thing B audience has some crossover, but not a total crossover, with the Thing A audience. Examples include decades of Joe Buck promo reads for a whole lot of crappy Fox shows, long debates about how to pronounce Mark-Paul Gosselaar’s name, Susan Sarandon inside the glass on a NBCSN hockey broadcast, Ernie Johnson awkwardly eating Pizza Hut pizza on-air, and much more. And the latest example comes from a Braun Strowman interview on Fox’s almost-national broadcast of the Chicago Cubs-St. Louis Cardinals game Thursday.

Having guests in the MLB booth is a long-running tradition, of course, especially on regional broadcasts of not-so-consequential games. But Cubs-Cardinals is pretty significant (the 82-70 Cubs were three games back of the 85-67 Cardinals for the division lead heading into this one), and interrupting a significant broadcast that’s going out to almost the entire country for an interview with a professional wrestler is interesting, to say the least. And while it’s understandable why Fox wants to promote WWE Smackdown‘s upcoming move to the Fox broadcast network (debuting Aug. 4), this interview went on for a long, long time, and created some annoyance amongst those watching who weren’t big WWE fans. Here are a couple of clips from the interview, first with Strowman talking with Joe Davis and John Smoltz about Smackdown’s move to Fox, and promoting how Smackdown airs 52 weeks a year, unlike MLB and NFL games:

From there, the interview just kept going and going. Later on, Strowman talked about playing baseball through high school, then slo-pitch softball, which his father was famed for:

And a whole lot of people weren’t impressed:

You guys are kidding, right? pic.twitter.com/RfdsQbjk3o

Really, @MLBonFox? You're so bored by #Cubs #Cardinals, you have to have an interview with @BraunStrowman to plug @WWE?

Most important series of the year and Fox has some WWE dude in the 2nd inning talking about wrestling during a baseball game. Give me back @lenandjd, this is ridiculous.

@FOXSports What is with the WWE BS?!? This is baseball. Shameless cross-promotion with an egotistical guest to boot.

@FOX2now what is up with BBall Night in America? 10 minutes of WWE bs. Announce the game, talk baseball or shut up. Terrible!

The WWE person must be a Cubs fan, why else would Fox do or even allow this. Seriously who let that guy up here. I don’t know maybe I can’t see well but this looks like a baseball field NOT a wrestling ring

turned on the baseball game. they have been interviewing a wwe guy for the entire half inning. he just said "well last year i won the money in the bank event and turned it into the monster in the bank event, being that i am the monster, brawn stroman, and…" i hate this

@MLBONFOX Hey guys, how about broadcasting this baseball game and not running an infomercial for WWE? Thanks.

The basic idea here is understandable; Fox has a big new sports-adjacent property to promote, and they’re going to do that any way they can. And in some ways, this is a more logical cross-promotion than some of the booth interviews with actors over the years; there’s probably a higher crossover between baseball fans and wrestling fans than baseball fans and fans of whatever show the network’s trying to promote this week.

But it’s unclear that having Strowman show up on a significant MLB on Fox broadcast for such a long interview is going to actually be beneficial for Fox. Especially as this led to a whole lot of backlash from those who were trying to follow the game and not the interview with the wrestler. It’s an interesting move, but not necessarily a beneficial one.