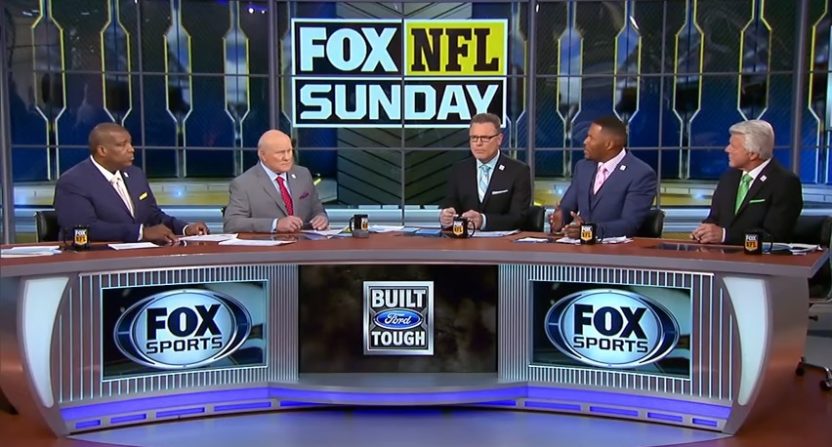 There’s been plenty written (often quarterly) about issues at ESPN impacting parent corporation Disney’s bottom line, but it’s rarer to see that with Fox Sports and parent corporation 21st Century Fox. And that’s despite Fox facing some similar challenges in rising cord-cutting, increased alternatives to conventional TV, and ballooning sports rights. There are reasons for that, which we’ll get to later, but that means it’s relatively notable when a high-profile analyst does decide to weigh in on Fox Sports’ impact on 21CF.

And that’s what Credit Suisse analyst Omar Sheikh has done, downgrading his price and earnings per share targets for the company thanks to NFL ratings that are coming in below market expectations and ongoing worries about if their purchase of the rest of Britain’s Sky (where sports is also a key component) will be blocked by regulators. Here’s more on that from CNBC’s Tae Kim:

“We trim our 2018/19 EPS forecasts … ahead of Q1 earnings,” analyst Omar Sheikh wrote in a note to clients Thursday. “The key near term headwinds are soft NFL ratings and the risk that the Sky transaction is blocked by UK regulators.”

Fox is seeking to acquire the 61 percent of European pay-TV company Sky it does not already own.

Sheikh maintained his outperform rating on Twenty-First Century Fox shares, but reduced his price target to $35 from $37. The new forecast represents 34 percent upside to Wednesday’s close.

“NFL ratings [are] weak so far,” he wrote. “This was negatively impacted during the first 2 weeks by hurricane disruption, but is disappointing given the soft comps – if ratings do not improve materially, we see a potential headwind to domestic advertising revenues in Q2/Q3 ’18.”

That’s not a huge downgrade, and it’s worth keeping in mind that Sheikh is still saying he thinks 21CF stock will eventually do much better than its current price. (That was $25.40 at the close of trading Thursday, and it’s notable that it took a 64 cent hit Wednesday following the U.S. men’s national soccer team’s elimination from the 2018 World Cup, an almost $1.2 billion loss in overall market capitalization; the U.S. team’s absence is expected to drastically reduce the World Cup’s broadcast value to Fox.)

But this does help to show the bottom-line consequences lower NFL ratings can have on even giant media companies. Fox Sports is only part of the 21CF picture (for example, most of Fox Sports’ value comes in the “television” sector, which made $5.6 billion in fiscal 2017 (page 120), but Fox Sports is only part of that number, and “cable network programming” (which yes, does include FS1, but it’s minimal next to the likes of Fox News) and “filmed entertainment” were much bigger, coming in at $16.1 billion and $8.2 billion respectively), and NFL ratings are only part of what Fox Sports does, but it’s clear that Sheikh thinks they’re going to have an impact on the wider company.

So why exactly does Fox Sports’ impact on their parent company get discussed less than ESPN’s on Disney? Part of that is corporate structure; ESPN is the key part of Disney’s media networks division, and thus regularly discussed separately from their other channels, while FS1 is hugely overshadowed in 21CF’s “cable network programming” segment by Fox News, and even Fox Sports programming on Fox itself is only part of their “television” segment (albeit a pretty important one), making it harder to parse specifically how sports is doing for them.

ESPN also makes much more than FS1 from per-subscriber revenues, and the declines there have deservedly got a lot of attention. Fox has actually seen some growth on that front recently, but is still behind ESPN in subscribers, and those fees are smaller and less important to the overall corporate picture. Fox’s broadcast sports side is also more important than their cable sports side, while it’s the reverse for Disney’s ESPN and ABC. So while the two parent companies are dealing with some of the same issues, they’re not always directly comparable. But that’s what makes notes like this one from Sheikh interesting; they illustrate that some struggles in the sports sector go well beyond ESPN, and that lower NFL ratings are problematic for a whole lot of companies.