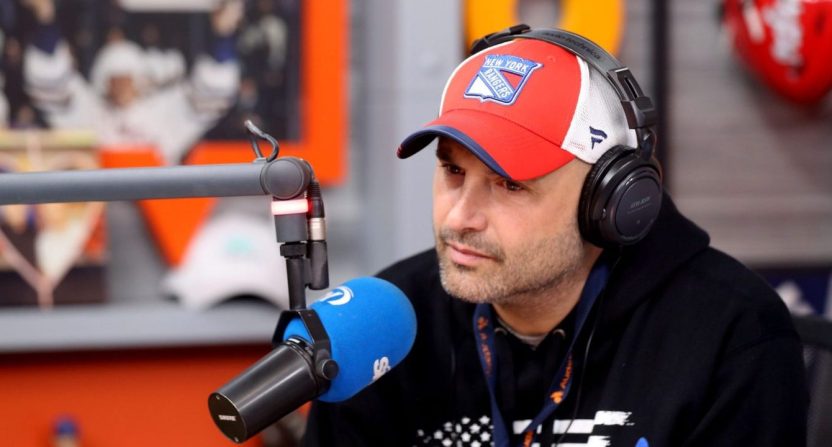 After more than three months of speculation, FS1 finally announced their new fall lineup which features WFAN radio host Craig Carton in the leadoff spot, prompting a rash of changes throughout their daily schedule.

.@FS1's daily studio lineup has a new look for fall ?

The Carton Show will debut Tuesday, Sept. 6 at 7 a.m. ET. While Fox Sports reportedly sought, but failed to pair Carton with former NFL offensive lineman and current ESPN analyst Damien Woody, the network will launch their new morning show with Carton (seen above in May 2022) and an unnamed rotating cast of co-hosts.

FS1’s anchor, Undisputed, will continue in its 9:30 a.m. ET – noon slot, featuring Skip Bayless and Shannon Sharpe. The network did, however, officially announce Jen Hale as the show’s full-time moderator. Hale has been filling in since Jenny Taft departed the show earlier this year.

As previously reported, Jason McIntyre replaces Joy Taylor and joins Colin Cowherd as the full-time co-host of The Herd. McIntyre’s passion for juicy rumors is an interesting pairing with Cowherd. Rather than finding a co-host to serve as the voice of reason, the McIntyre-Cowherd pairing will see no shortage of hot takes on The Herd.

Taylor joins Emmanuel Acho and LeSean McCoy for a revamped version of Speak for Yourself, which is noticeably devoid of previous co-host Marcellus Wiley. Speak for Yourself, however, no longer follows The Herd on FS1’s lineup and will instead air from 4:30 – 6pm, creating an afternoon spot for Nick Wright at 3pm.

To make room for Carton, FS1 moved Wright’s morning show First Things First to afternoons. Wright will continue to co-host the show with Chris Broussard and Kevin Wildes. But the trio will move forward without a replacement for Jenna Wolfe, who announced her departure from First Things First after five years earlier this summer.

FS1 is seemingly investing a lot in Carton by revamping their entire lineup to make room for him. Their schedule is undergoing a lot of changes for a multitude of reasons, but Carton’s addition appears to have prompted at least some of those decisions. Carton has been a local radio ratings magnet throughout his career, but leading off on FS1 will test his national appeal.

The new TV deal will not alter Carton’s radio schedule with WFAN, which still sees him co-host their afternoon show with Evan Roberts.