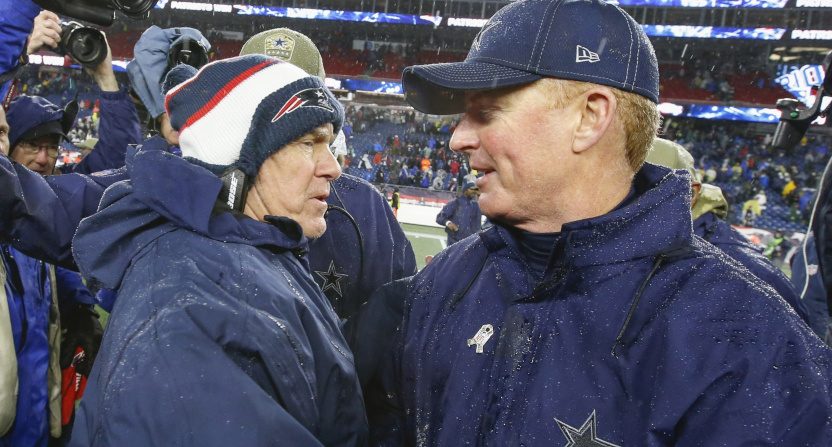 It wound up being a very good ratings weekend for Fox Sports. The Penn State-Ohio State game they aired at noon Eastern Saturday was their best-rated college football game of the season (and the second-best one on any network this season, behind only LSU-Alabama on CBS) with a 6.3 metered market rating. And then on Sunday afternoon, their NFL broadcast of the New England Patriots’ win over the Dallas Cowboys pulled in a 19.5/40 metered market rating/share, tied for their best regular-season NFL numbers since 1996.

America's Game of the Week, which saw the Patriots defeat the Cowboys, delivers a powerhouse metered market rating. pic.twitter.com/GFPpMPIrvw

As Paulsen writes at Sports Media Watch, that rating stacks up well not just against past NFL broadcasts, but against all of TV since the Super Bowl:

Sunday’s Cowboys-Patriots NFL national window averaged a 19.5 overnight rating on FOX, tying the highest regular season NFL overnight since Patriots-Colts on CBS in 2007 (22.5). It matched a 2015 Seahawks-Cowboys game on FOX.

The 19.5 is also tied as the highest for a regular season NFL telecast on FOX since 1996, again matching the 2015 Seahawks-Cowboys game.

Of course, some of that is about there only being one other 4:15 p.m. Eastern game this week. This game went to the whole country on Fox, and only faced limited competition; in some markets, the Jacksonville Jaguars-Tennessee Titans game aired on CBS at that point, but most of the country got an early CBS game. And the decision to flex Packers-49ers to Sunday Night Football also helped; that game replaced Seahawks-Eagles, which went to 1 p.m. Eastern and was seen earlier on Fox, but Packers-49ers was initially set for 4:15 p.m. Eastern. With it out of the way, Fox was able to show Cowboys-Patriots nationwide in the 4:15 p.m. ET window. (Packers-49ers drew well for SNF too, despite the game proving lopsided.)

But beyond that, this happened to feature two division-leading teams in the 9-1 Patriots and 6-4 Cowboys, and two teams that always tend to draw well. As discussed in our primetime schedule analysis post earlier this year, the Cowboys were first in viewership for teams’ nationally-televised windows in 2018-19 (as per Ad Age) and fifth in local viewers across local and national windows for the first six weeks of that season (as per Vidlytics, as discussed in a Reddit post). Meanwhile, the Patriots were third and fourth respectively by those metrics. Throw in that they’re both doing well this year (different respective levels of well, obviously, but the Cowboys are still leading their division, so that’s far from terrible), that their game had plenty of postseason implications that may have intrigued fans of other teams, and that there wasn’t much competition, and you have a recipe for tremendous ratings.