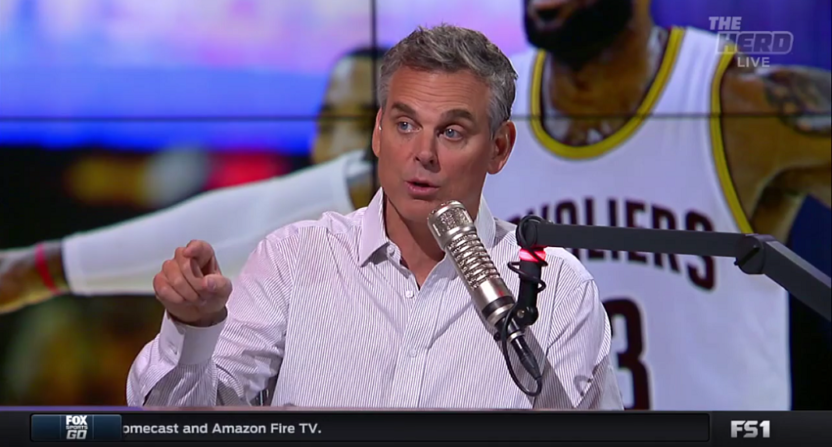 Colin Cowherd will continue to host his daily talk show on Fox Sports and iHeartRadio for at least four more years, Andrew Marchand of the New York Post reports Tuesday.

Per Marchand, Cowherd is closing in on a new extension with the two networks, despite having a year left on his contract. The polarizing host will reportedly earn a raise off the $6 million annual salary Fox and iHeart paid him when he left ESPN in 2015. Via the Post:

Cowherd, 54, left ESPN for what was reported as a contract of more than $6 million per year in 2015. A source confirmed that price tag, but since Cowherd is continuing his ownership stake in his content, the exact total of his new deal is likely more.

For example, with iHeartRadio, Cowherd owns part of his radio show. Cowherd, sources said, has a salary from iHeart, but then receives a share of the net revenues above what iHeart already pays him.

ESPN Audio executive Traug Keller had expressed interest in bringing Cowherd back to Bristol, and a source told Awful Announcing that ESPN had begun to discuss how Cowherd’s salary might fit into the network’s budget. But in the end, Cowherd seems to have been satisfied enough with his role at Fox to re-up for another four years, before his contract had even expired.

But while Cowherd will continue on The Herd (as well as Fox’s NFL Kickoff), he will reportedly pull back from his other daily show, Speak for Yourself, which he hosts alongside Jason Whitlock each afternoon on FS1. Marchand reports that Cowherd will soon leave that program, and will be replaced by Marcellus Wiley, currently of ESPN’s SportsNation.

Cowherd’s impending departure from Speak for Yourself had been previously reported by Michael McCarthy of Sporting News, who also pegged Wiley as his likely successor.

Speak for Yourself, which just celebrated its second birthday, has not enjoyed particularly strong ratings or been quite as viral as FS1 likely expected when pairing the bombastic personalities of Cowherd and Whitlock. Per McCarthy, the show will soon expand from one hour (5-6 p.m. ET) to two hours (3-5 p.m. ET).