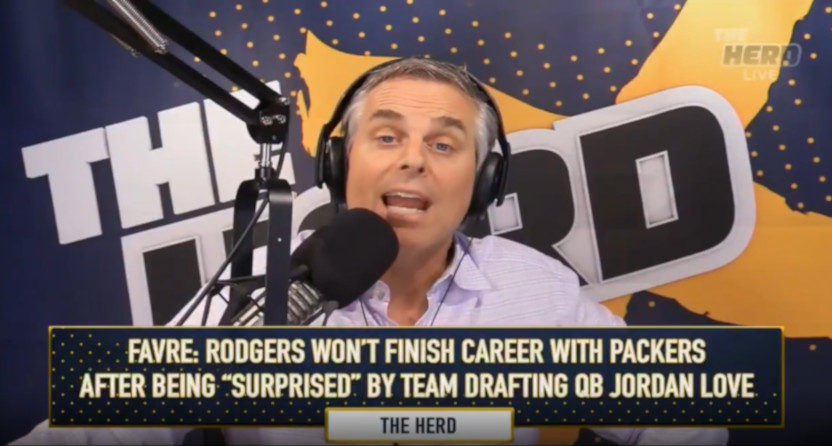 Fox Sports’ Colin Cowherd is often in the news for “embarrassing” (his word!) takes, bad picks, getting timelines wrong, and insulting entire cities, regions and countries, but this week, he made headlines for using comments from a competitor’s radio show without attribution. On Wednesday, Rich Eisen had quite a notable interview with Brett Favre about Favre’s conversation with Aaron Rodgers following the Green Bay Packers’ pick of Jordan Love, which brought back memories for many of when the Packers drafted Rodgers while they still had Favre. On Thursday, Cowherd not only referenced that interview, but played two clips from it, while only citing it with “Brett Favre was on a radio show, a TV show.” That’s technically correct, as Eisen’s show airs daily from 12 p.m. to 3 p.m. Eastern on radio, Sirius XM, and NBCSN (from 1-3 Eastern), but it’s not a proper citation at all. Here’s the clip of Cowherd’s discussion of this, via Funhouse:

Cowherd opened his show today by playing two clips from Brett Favre's interview yesterday on the @RichEisenShow. He never bothered to credit Rich.

This has nothing to do with the two shows competing head-to-head. Colin simply missed this minor detail during his 8-hour show prep. pic.twitter.com/268OmmxwF5

Chris Brockman, a member of Eisen’s show, then referenced this from the show’s official Twitter account, saying that Cowherd was the only one who didn’t properly credit them:

we appreciate those who took the time to properly courtesy us yesterday and today. -Brockman

literally every other news outlet who used this courtesy'd us and mentioned that Favre said it here. it's not hard.. -Brockman

Mentioning where you got a clip from really shouldn’t be that hard, and this is remarkably poor even by Cowherd’s standards. And proper attribution is a big deal; yes, plenty of large media companies have screwed it up at times, but that’s often led to backlash and changes. We’ll see if Cowherd does anything differently on this front in the future.