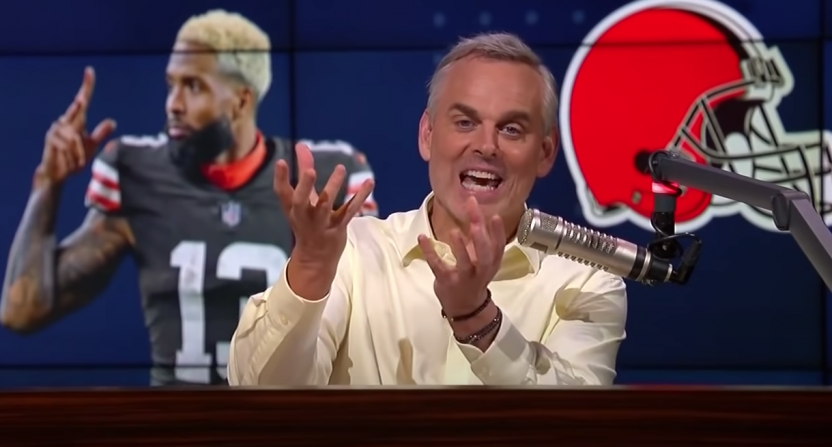 Data informs networks what sports and teams will move the needle. Producers coach talent. Agents further grease the wheels to make ensure everyone is on the same page and that things go smoothly and stay quiet. What we consume is a very refined sports media sausage and the recipe is usually a well guarded secret. There are very few in the industry who really are an open book. The growing exception to that rule, however, seems to be Colin Cowherd.

Cowherd has his fair share of detractors, but also has a very sizable and loyal audience. I fall in neither camp, but what I absolutely LOVE about Cowherd is from time to time, he lets you behind the curtain with a level of honesty and transparency that is extremely rare within the industry. I’ve covered this phenomena a few times before, as I genuinely eat this stuff up. These instances include:

–  Cowherd explaining that it’s not a problem if he’s wrong, as long as he’s interesting after Dabo Swinney called him a fraud.

– Cowherd saying he will only troll fanbases if there is money in it and it’s not a smaller city like Cleveland.

While these instances have been few and far between, last week Cowherd taped a podcast with Ethan Sherwood Strauss for Strass’ new solo venture, House of Strauss. Cowherd spoke extensively on a few topics that further illuminate his professional code of values and core strategy, but also shone a light on the differences between Fox and Disney and how they operate. What’s most interesting to me is once again, how refreshingly candid Cowherd is about his playbook, but also just how much of these principles seem to now deeply rooted into the DNA of Fox Sports, and in particular FS1. So while this serves as a deep dive into Cowherd views his job and sports media, it’s also a bit of a window into how Fox Sports and FS1 operate.

On responding to criticism

“You know what I always feel? You have to play offense in this business, you can’t play defense. There’s a reason Steph Curry got a better shoe deal than Ben Wallace. Offense pays a lot better than defense. Me coming up with fresh, unique content pays me. Me defending my content doesn’t pay me. So I always try to tell my staff “Our critics are invisible, they don’t matter. Let’s not give our audience to them. Don’t validate them.” We just don’t acknowledge it. I don’t hear most of it. When I do, we don’t address it. I try not to. We just play offense. We shoot. And we keep shooting. If you are a shooter like Steph Curry, you are going to have bad nights. I’m going to have bad segments. I’m not going to go apologize for shooting and my shot selection. Shooting is what I do.”

“Writers write for other writers. They don’t write for the consumer. I’m a radio TV guy. I broadcast for the consumer. I pick the topics that will appeal to the largest group of consumers. I’m not talking World Series today, it’s over. I’m talking OBJ and Aaron Rodgers. I don’t have an obligation to talk about sports. I have a fiduciary obligation to my family to talk about stuff that drives numbers and drives advertising and drives revenue. I am always thinking about what will appeal to the largest group of fans. I never worry about what other broadcasters think of me. I think writers live in a very narrow tunnel of trying to impress other writers and I see that regularly. I don’t know what to think of it.”

On not playing it safe

“I have never, ever been concerned about what a broadcaster thinks of me. There is one guy specifically, I call him “Captain Safe-Take.” He’s a broadcaster, he never says anything, he’s very vanilla, it’s just all safety-ism. It’s just all easy stuff, he’ll never get pushback on Twitter or television and he sometimes rolls his eyes at other broadcasters. A Stephen A. Smith, Me… the opinionists. My takeaway is you can always play it safe. The fun and excitement in this is to have theories, to roll the dice.

I loved that I was right on OBJ and said it didn’t work 3 years ago. I like that I’ve been right on Baker Mayfield. He’s fundamentally not a #1 pick. I think I’ve been right on KD, when I said leaving Steph for Kyrie is an absolutely, tragically bad decision. Because Steph is incredibly reliable and Kyrie is… and I’m right on that. The fun isn’t talking about stuff that has already happened, some of the fun is projecting what may happen. Of course your accuracy and hit rate goes down. But I’m not going to just grab the paper and say “Here’s what happened, here’s my opinion.” I think you owe the audience that and so much more.”

On ESPN vs. Fox

“I didn’t feel like I was in trouble a lot at ESPN. ESPN is run by Disney and you could always feel the safety net of Disney hovering over ESPN. You could always feel Disney’s presence. Whether it was with budgets, topics, they avoided anything controversial. You were often encouraged to avoid a topic because they had their tentacles on everything. They had so many leagues, so many commissioners… but FOX is owned by a very entrepreneurial Australian family, the Murdochs. They have been in the crosshairs of criticism from day one on this soil. FOX News, Wall Street Journal, New York Post. They are entrepreneurial, they are naturally, innately, risk-takers.

They don’t run their company through Twitter. They have been dogged on Twitter since day one. When I was at ESPN, that company was, there were times I thought it was run by social media. It was very reactionary to various media critics. I don’t even know if our bosses know half the media critics. Getting back to your question, I think there was just a different sensibility at ESPN. I was considered more of a loose cannon there, but at FOX I’m just viewed as an employee. I work at a company with Tucker Carlson, Sean Hannity, Clay Travis, Will Cain, multitudes of outspoken people.

Shannon Sharpe and Skip Bayless are outspoken. I just think I’m outspoken. At ESPN, SportsCenter was largely seen as a sports page, a bastion of journalism. The opinionists there were like “Ohhh, that’s a different part of the hospital, we don’t go down to that wing very often.” Whereas at FOX, the entire brand now, we got out of the movie business, is opinion. ESPN.com is this journalistic enterprise. FOX is digital, FOX is opinion, FOX is sports, FOX is games, FOX is Super Bowls, World Series, the World Cup. I just think they are different companies and I feel at FOX I can just let it rip. But at ESPN I just always felt you could just feel the pressure of Disney on top of the company.”

On the role of PR at sports media networks, which we can attest that Fox definitely does much differently compared to its peers

“I got into this discussion one time with somebody from ESPN and I said “do you really need a massive PR staff of 30 people anymore?” Clay Travis was attacking ESPN years ago and I said “Clay Travis can deliver 15 tweets before the PR people can release 1 PR rebuttal.” Irrelevant. PR… you should have somebody in PR that releases your ratings for the World Series’ games.

PR is overwhelmingly powerless today. First of all, most people don’t take it seriously. You know now that we are all cynical about PR. It’s just a fluff piece. Secondly, Twitter and Instagram… I can attack a company and fire away for hours and you do a rebuttal. I go back and crush your rebuttal. So we got into this discussion, the critics, the PR people, not that they don’t have value but you don’t need this labyrinth, this arsenal or weaponry of PR people because they just can’t compete with digital and social media.”

“It’s a 24 hour news cycle. Let’s say blankety blank host Stephen A. Smith says something and it’s deemed insensitive. Do you need a PR rebuttal or do you just wait 6 hours and turn your phone off and there is a new controversy and somebody else to yell at 6 hours later. That’s almost always been… most problems in life, as a parent, as a dad, they go away in a day. Addressing everything to your point, is not always the remedy. Just letting things simmer, cooler heads prevail. Let’s just take a deep breath and talk about it in the morning and somebody else is getting debased on the internet the next morning.”

Many of you have potentially read Cowherd’s thoughts and nodded in agreement to many of his well-articulated sports media philosophies. I’m sure others had a very much different reaction. While the philosophical divide between ESPN and FS1 is not quite as wide as let’s say Fox News and CNN, Cowherd’s comments are some of the most telling comments that articulate the philosophical differences between the networks.

As the culture wars rage, Disney and ESPN continue to invest in streaming,  and cord-cutting continues to strain the cable business, Fox has been generally a bit guarded into offering up much about their future plans to navigate these growing challenges and how they’ll differentiate themselves. That is, except for Cowherd who continues to be an open book, when all too many in this industry at his level and on the business side are guarded with their comments and selective about what they’ll talk about and where. For us, that makes Cowherd interesting, even if he’s wrong sometimes. Which seems to validate Cowherd’s first sports media commandment.