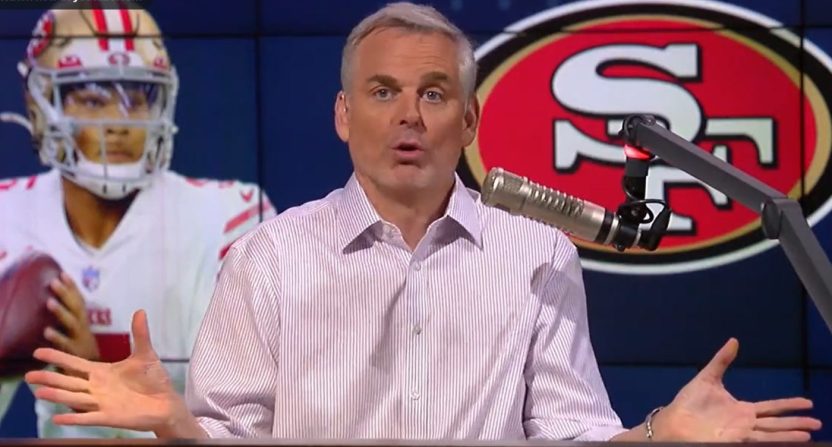 Not more than two hours after Stephen A. Smith claimed, “we got some fake ass people in the media,” Colin Cowherd was on Fox Sports declaring his trust in the media.

That’s drastically different opinions of the industry by two of sports media’s most well-known personalities, with Cowherd taking specific aim at the term “fake news,” a phrase exhausted by former president Donald Trump and his rabid supporters.

“If the media makes a mistake, ‘fake news, fake news,’ it’s a broad brush, the media doesn’t know what they’re talking about,” Cowherd said as he began to debunk the term ‘fake news.’ “I’ve been in it 30 years, overwhelmingly I trust the people in the media to call it right. Some people have political agendas, that’s obvious, that goes without saying, but 95 percent of the media is really good. People make mistakes, like pilots make mistakes, like doctors make mistakes. It’s life.”

How good can Trey Lance be?

"You put a top quarterback on this team and they're winning the Super Bowl… It's the perfect situation." — @ColinCowherd pic.twitter.com/bbkVgyvwd9

Consistent with Cowherd’s hosting style, the assessment was a really long way for the Fox Sports Radio host to make the point that he believes in the media’s reporting of San Francisco 49ers quarterback Trey Lance.

“I know it’s easy to say, ‘fake news, everything’s fake,’ but the bottom line is, I trust those reporters in San Francisco. Many have been at newspapers for 25 years and these reports, they’re accurate,” Cowherd claimed. “Fake news, outdated term. Come on, stop.”

While I agree “fake news” should be retired, it’s for a different reason than what the Fox Sports Radio host described. Cowherd believes the media is “95 percent really good.” I find “fake news” to be an exhausted phrase often leaned on by people attempting to mask negative coverage as being unfair, regardless of merit. But I commend Cowherd’s “95 percent” assessment of the media, that’s a nice goal for the industry to achieve.