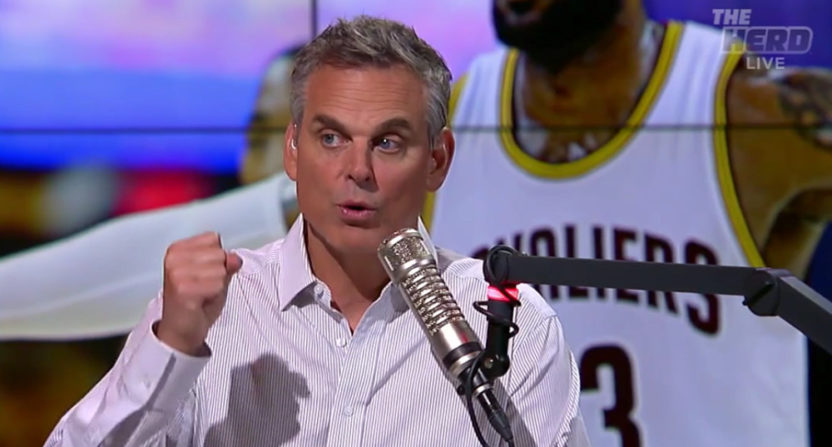 Fox’s shifting of the FS1 goalposts from “ESPN alternative” to “ESPN2 competitor” continues, and now it’s showing up on air. We’ve previously seen some interesting claims from them in print, in ads and in PR claims, but an on-air host discussing it in the middle of a sports-focused show is a bit different. That’s what Colin Cowherd did on FS1’s The Herd Friday, talking about how his network stacks up against ESPN2 after a discussion about how they were sending him to do shows from Miami for a couple of days next week (around the MLB All-Star Game):

He then went on to talk about how much the Nick Wright and Cris Carter First Things First morning show will help when it launches in September, before segueing back into sports talk:

“I am so excited for Labor Day when we finally have a morning show at this network. We have a leadoff hitter, which we have not had. So this growth has been due to a lot of people you do not see, and the commitment from people behind the scenes, as much or more as the people you see on air. So a very exciting time for us. By the way, Cris Carter and Nick Wright will be on our show Tuesday in Miami. That’s cool. So…everybody’s trying to convince me that Gordon Hayward…”

Even if you go back to Q2 2013, the last full quarter before FS1’s August 2013 launch, FS1 has only improved 52.9 percent (primetime) and 46.1 percent (total day) from what predecessor Speed drew; that’s impressive, but not 70 percent. The only figure close to 70 is FS1’s 73.2 percent total day improvement from Q2 2014, when they’d had FS1 up and running for almost a year but had lost 20,000 of Speed’s average total day viewers. So, good job for having less terrible ratings than your channel used to?

It is impressive that FS1 is now posting some wins over ESPN2, and that is a change from where they’ve been. Back in 2014, FS1 was well behind ESPN2 and duking it out with NBCSN for third. That’s not so much the case any more. However, the ratings news hasn’t been all good for them (as even Cowherd’s stats note; two wins in a row is nice, but they only beat ESPN2 in three out of the last six months); they took a 24 percent primetime hit year over year in April, for example, and their coverage numbers have seen some downturns lately. And it’s worth noting that a lot of FS1’s success against ESPN2 has come not from anything they’ve done, but from the at least partly self-inflicted wounds that channel has suffered.

The biggest blow to ESPN2 has come from Bristol’s decision to move First Take to the main network and SportsCenter to ESPN2, which began to take effect in January. At the time, we talked about how that was at least partly an attempt to outdraw and out-debate former First Take co-host Skip Bayless and Undisputed; there were other factors as well, such as growing ratings issues for SportsCenter and the network’s shift to be more personality-focused overall, but decisively winning the debate show matchup with FS1 did matter to at least some ESPN execs. However, the move hasn’t worked out too well for ESPN overall. Consider what SportsTVRatings wrote about that in May:

ESPN Chose to Kill ESPN2 for at least 8 months to bolster First Take? (Really!) WAS IT WORTH IT?

Time will tell, but if I can wager right now I’m betting on “nope, not worth it.”

First Take was the anchor, the show with relatively puffed-up ratings that fueled the afternoon ESPN2 shows. His & Hers was de facto canceled and ESPN2’s morning & daytime lineup were ruined the moment they decided to move First Take.

…If ESPN had all its new lineups sorted out and then started moving stuff around that would’ve been one thing. I’m guessing the new ESPN/ESPN2 shows will mostly launch in September so that’ll be an 8 month gap between moving First Take and sorting out the new lineups/launching the new shows.

…That’s a brutal 8 months for ESPN2. Not having the schedule sorted before moving First Take was effectively a proactive and deliberate decision to let ESPN2’s morning & daytime weekday lineup wander around in the desert aimlessly for 8 months. That’s a pretty amazing choice.

That piece also mentions that ESPN2’s average minute total day audience dropped from 235,000 in April 2016 to 174,000 this year, a fall of 26 percent, while ESPN only dropped two percent, and it gives (now former) Fox executive Jamie Horowitz credit for getting ESPN “to panic” with the First Take move. There’s a case to be made there, and it can be argued that that move has hurt ESPN overall (First Take isn’t doing much differently than SportsCenter did on the main network, but the ESPN2 audience has plummeted without it), making it easier for FS1 to catch up to and perhaps pass ESPN2.

It’s also worth noting how little original programming ESPN2 has had for much of this period; in February, the only original (non-rerun from ESPN) show they had was the final hour of The Dan LeBatard Show with Stugotz. That’s changed a bit now, with MLB Network’s Intentional Talk now airing on ESPN2 (and an hour before it airs on MLBN, to boot) and College Football Live returning later this month, but five of the seven shows on ESPN2 from 1 p.m. to 6:30 p.m. Eastern are still going to be reruns of ESPN programming. And that’s important to remember when considering Cowherd and others bragging about FS1 versus ESPN2, especially during the day; they’re saying that more viewers choose to watch them than choose to watch reruns of programming that’s already aired on ESPN. That may be true, and it’s nice compared to where FS1 has been, but it isn’t necessarily a huge accomplishment in the grand scheme of things.

Should Cowherd be talking about the ratings? Why not? This is a little unusual for TV, but it’s worth remembering that The Herd started as (and is still also) a radio show, and it’s not uncommon at all for radio hosts to talk about how well they’re doing. And it wasn’t like this was a long point; even if you combine the discussion of the morning show, this only was about a minute, and one coming back from break to boot. But it’s interesting that the “Forget about ESPN, we’re beating ESPN2!” narrative has now transitioned to an on-air one. And while it does say something positive about FS1 that they’re now at a point where they can beat ESPN2 in back-to-back months, they’re still a long way from being the “ESPN alternative” they talked about at launch. “An alternative to ESPN2 reruns of ESPN programming” is more accurate at this point.