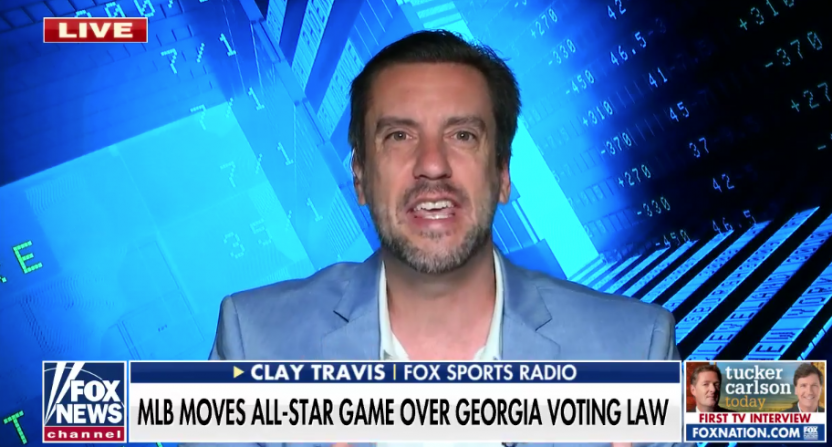 Clay Travis will definitely not be sticking to sports going forward.

The WSJ reports the right wing provocateur will be partnering with Buck Sexton to launch The Clay Travis & Buck Sexton Show, which will inherit Rush Limbaugh’s prized radio slot on Premiere Networks. The show will launch June 21st and air weekdays from 12pm-3pm.

But it’s not all good news for fans of Travis, as he will be stepping away from his morning sports radio show, Outkick the Coverage, which aired on Fox Sports Radio from 6am-9am ET. His last show is tomorrow. Travis explained the move on his website, which he recently sold to Fox.

As I looked at the data during 2020, the story it told me was clear. As much as people might enjoy my sports opinions, they loved even more when I talked about issues that were, frankly, far more important than sports: my belief in American exceptionalism and the meritocracy, my rejection of cancel culture and identity politics, my repudiation of everything woke in our culture. I’ve always said that sports should be an escape from politics, but, increasingly, sports became politics.

Travis says he will continue running, writing, and appearing on Outkick.com. He’ll also continue to appear on FS1’s Fox Bet Live, although that might be one to watch, since the show airs at 5pm and tapes a little earlier in the day. That gives him a tight window, since the new radio show will wrap up at 3pm.

Travis has had his finger in several different pots over the last few years, between television, radio, writing, podcasting, live social media broadcasts, and running his own site, which was flipped pretty quickly to Fox after it went on a hiring spree last year. While it remains to be seen how much of his time will remain dedicated to those other ventures and platforms, the new radio show (given its stature) will likely be his primary focus going forward and one that essentially completes his transition from sports commentator to full on conservative talk personality. I don’t think it’s a stretch to say that in the not so distant future, you’ll be seeing more of Travis on Fox News than FS1 with Travis saying he’ll appear on Tucker Carlson tonight to talk more about the move.

Sports and politics has always been a tricky marriage given the emotions tied up in that growing overlap. Travis threaded that needle by leaning into serving up culture wars red meat to a base of conservative sports fans that felt ignored by mainstream outlets. Travis may have been nearing a ceiling in the sports world given the increasingly divisive and controversial rhetoric. Along the way he found his star ascending in conservative media world, which seems like a much better long term fit.