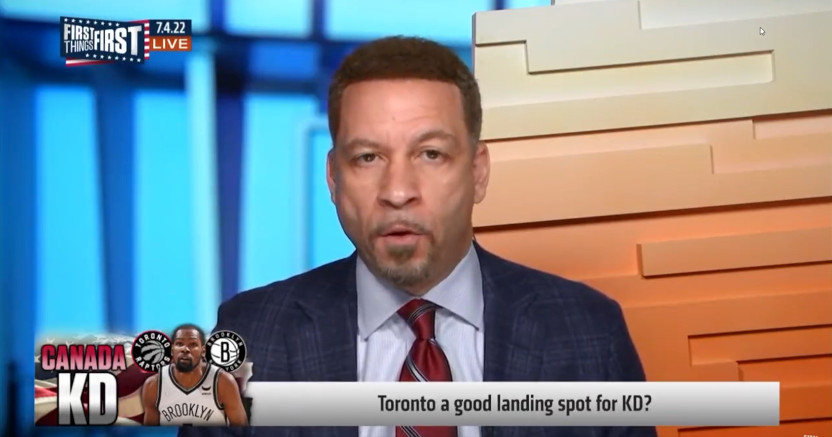 When you’re in the television business of giving hot takes, some of your opinions will not be well-thought-out gems. On the Fourth of July, and three days after Canada Day, Fox Sports’ Chris Broussard inexplicably decided to sideswipe our neighbors to the north.

On Monday’s edition of FS1’s First Things First, the topic of Kevin Durant possibly being traded to the Toronto Raptors came up. The question on the show was: “Toronto a good landing spot for KD?”

Here’s how Broussard chose to respond:

“I don’t think KD will want to go to Toronto. I visited there many times. Obviously, I was there covering the league. Great city, but it’s not America. And you feel it when you’re there, I’m telling you, especially as an African American. It’s a different situation than African Americans are used to being in.”

Here is the video below for full context.

-him comparing Scottie Barnes to Ben Simmons
-saying maybe a Ben Simmons trade makes sense for the #Raptors
-"The best players they have tend to be the international guys… or DeMar DeRozan, Kyle Lowry, who weren't superstars." pic.twitter.com/iaSQnVeOcs

Before his current role with ESPN, Broussard was a long-time NBA reporter, most notably for the New York Times, but also with ESPN. His perception of the league is viewed through the prism of when he was covering it in the 1990s and 2000s. He brought up guys like Tracy McGrady, Vince Carter, and Chris Bosh as examples of superstars who left Toronto.

Those are not modern-day examples that reflect the current reality of a franchise that won the 2019 NBA championship. Instead, Broussard relied on an oversimplification and a trope. As expected, his views on Toronto were not well received.

Tell me you know nothing about Toronto…or KD…or need to badly reach Caribana one time. One of the worst takes. https://t.co/BPwFYZMEB5

Black people make up about 8.5 percent of Toronto’s population. That’s more than American NBA cities Phoenix (7.1), San Antonio (6.8), Portland (5.9), San Francisco (5.1), and Salt Lake City (2.6). The idea that this international metropolis is a place where African Americans would feel overwhelmingly unwelcome and uncomfortable is absurd.

Yes, Kawhi Leonard bolted after leading the Raptors to the title. But he didn’t leave because he disliked Toronto. He left because he wanted to return to his hometown of Los Angeles. Completely understandable. Plus, everyone knew he was a one-year rental. If Leonard was traded to Chicago, Philadelphia, or even Miami, the result likely would have been the same: him signing as a free agent with the Clippers.

The man who made the deal for Leonard is Masai Ujiri, the England-born son of Nigerian parents. After winning the championship, he could have gotten any job anywhere in the NBA. He chose to remain in Toronto, signing a new deal to become vice-chairman and president. If Toronto is such a difficult place to be, as Broussard would lead you to believe, why would Ujiri stay?

Toronto … literally named the most diverse city in the world. https://t.co/oVHy8TQay1

Are there challenges unique to Toronto when it comes to luring players? Of course. You can say that about American franchises like Charlotte, Orlando, and Sacramento, as well as others. This is not new. Maybe some players will be reluctant to leave the US. Maybe some hate cold weather. Maybe some are alarmed about the high tax rate.

Those are all legitimate reasons why an athlete might not want to play for the Raptors. But Broussard did not offer up specifics. Instead, he made a broad generalization about African Americans without facts. (And that’s not the first time we’ve seen that with pundits opining on the Raptors.)

Fred VanVleet is as Midwest America as they come. He grew up in Illinois and played for Wichita State. He has chosen to stay with the Raptors, the only NBA team he has ever played for. Interesting that Broussard didn’t mention this All-Star during his rant.

Where does Durant want to go? Supposedly, the Phoenix Suns and Miami Heat are at the top of his wish lift. And apparently, the Golden State Warriors are a contender.

Maybe Toronto doesn’t have a realistic shot at Durant. But Broussard’s opinion as to why was out of bounds.