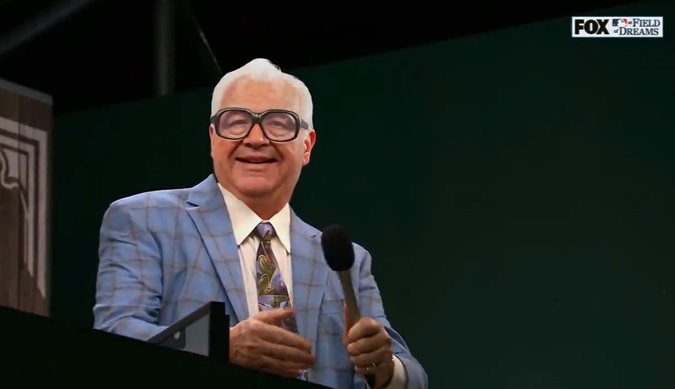 While Fox’s usage of a hologram of former Chicago Cubs’ broadcaster Harry Caray at their Field of Dreams game Thursday didn’t go over well with many fans, Caray’s grandson Chip was quite pleased with it. Caray, the long-time Atlanta Braves’ broadcaster (who also called Cubs’ games from 1998-2004 and worked nationally for TBS from 2005-09), went on the Parkins  & Spiegel Show on Chicago’s 670 The Score Friday afternoon, and said he appreciated Fox including his grandfather in the broadcast that way:

“It was kind of cool. I can’t speak for the rest of the family, but yeah, it’s cool. That movie brings back so many nostalgic memories for anybody whose lost their dad. There’s the scene at the end – ‘Hey dad, you want to have a catch?’ – there’s nothing I wouldn’t give to be able to do that with my dad. When Ken Griffey Jr. and his dad came out in right field, I know both of those guys, that was a tear-jerker, a lump-in-the-throat moment. Look, my grandfather meant a lot to a lot of people in Chicago, and he just had a great time and fun at the ballpark. And to have him be a special part of that coming out of the corn, as it were, with the backdrop of Dyersville, Iowa in that movie, it was really, really special and really, really well done. I was pleased.

“Imitation is the sincerest form of flattery as we all know. The fact that Fox thought enough to be a part of their special show was really, really cool.”

Caray did add that the hologram seemed to have put on a few pounds, though:

It’s positive that Chip Caray, at least, was pleased by how this turned out. It would be unfortunate if a national broadcast hologram like this didn’t go over well with the family of the person depicted. (And it’s notable that he says in that interview that he wasn’t asked for permission for this, but he wasn’t sure if another family member had been. So this wasn’t him defending a thing he specifically authorized.)

It will be interesting to see if we get more of these kinds of presentations of passed-on sports figures on current broadcasts. Many attempts at it so far haven’t been that well-received, including the deep fakes used for Al Davis and Pete Rozelle in 30 for 30 entry Al Davis Vs. The NFL and now this hologram of Caray. But that doesn’t mean that people will stop trying. And having family members like Chip Caray say they liked it probably matters much more to executives than the criticisms from viewers do.