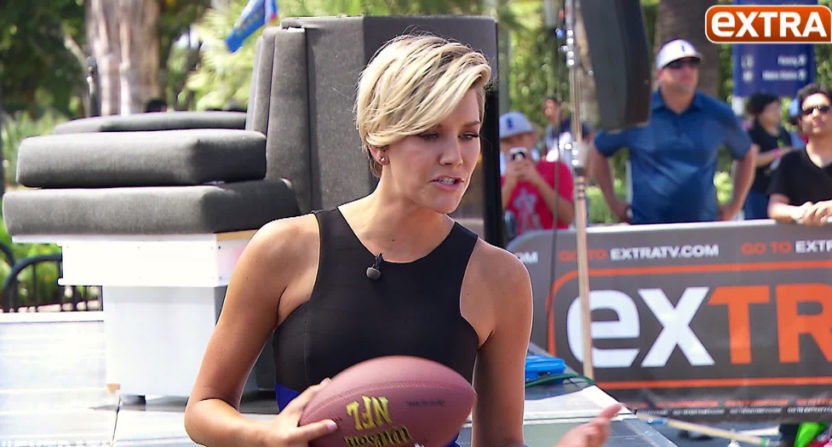 There’s been plenty of speculation about Charissa Thompson potentially leaving Fox to return to ESPN, starting in January when Michael McCarthy of The Sporting News wrote that the Worldwide Leader was considering her to take over from Chris Berman as the host of Sunday NFL Countdown. Thompson somewhat denied it in February, saying she was happy with her current jobs (hosting early pregame show Fox NFL Kickoff and serving as a weekday host for syndicated entertainment news program Extra), and the Sunday NFL Countdown role eventually went to Sam Ponder, but that hasn’t stopped the Thompson-to-ESPN discussion. McCarthy wrote in late July that new ESPN EVP (content) Connor Schell wants Thompson for Mike Greenberg’s forthcoming morning show, and one of the biggest obstacles in the way (her work on Extra, which is based in Los Angeles near Fox’s operations, a long way from ESPN’s headquarters in Bristol) has now fallen, with Thompson posting on Instagram Monday that she’s leaving Extra:

•Great news.. @mariolopezextra no longer has to courtesy laugh at my jokes! I can’t believe it’s been 3 years since I entered the world of entertainment and only because @lisagregorischdempsey took a chance on me (even if I only knew who George Clooney was)! •My tenure on @extratv has been nothing short of incredible and I am moving on to the next chapter with a VERY grateful heart. •This show is more than just a show it’s a family and I have made friendships that will last a lifetime. @julie_kozak •I’m excited for the new cast to make their debut in Sept , especially my little nugget @reneebargh who is so deserving of her new role!! •To avoid rambling I will simply say thank you to the viewers , thank you to the staff / crew (you guys are SO amazing) and especially thank you to @mariolopezextra you will never know how much I appreciate you and how grateful I am to have stood next to you for the last three years. Don’t ignore my texts & I will always respect the fact you don’t use emojis !! Love you so much•

That feels highly significant to Thompson’s future, and it would seem likely to bolster the chances of her leaving for ESPN, especially to team up with Greenberg. Sports Illustrated‘s Richard Deitsch tweeted that seems like an odds-on favorite at this point:

If I was a betting man, I might now bet on @CharissaT heading to ESPN. Full props to @MMcCarthyREV who has reported this from jump. https://t.co/X1hJPJ0BcX

Of course, this isn’t a guaranteed move, as McCarthy got a statement from Fox last week that they “absolutely” want to keep Thompson, “a highly valued member of the FOX Sports family.” But it’s not clear what Fox has to offer her, especially now that president of national networks Jamie Horowitz (who worked with Thompson on SportsNation during their ESPN days) is gone; McCarthy’s piece says Horowitz “was in the midst of developing new FS1 programming for her at the time he was ousted,” but that may have exited with him. And FS1 has a reasonably full daytime lineup centered around embracing debate, and doesn’t seem to have anything as prominent as Greenberg’s new morning show (which will be on ESPN proper) for Thompson.

It is notable that ESPN’s discussion of the new show has involved “several co-hosts“, so this isn’t necessarily just “Mike and Charissa” in place of Mike and Mike, but a major role on that show would still be a pretty high-profile spot. That show’s one of ESPN’s biggest new initiatives, and they’re going to be spending lots of energy promoting it. And Schell’s reported personal interest in bringing Thompson in makes it seem reasonably likely to happen. And now Thompson doesn’t have an entertainment gig keeping her in LA.

The timing would seemingly work out, too. Thompson’s contract with Fox reportedly ends after the 2017 NFL season, which is close to the January 2018 start of Greenberg’s show. We’ll see if this move comes to pass, or if Fox finds a way to convince Thompson to stick around. Still, this departure from Extra would seem to boost the chances of her heading to ESPN. At any rate, it adds fuel to the fire of that discussion.