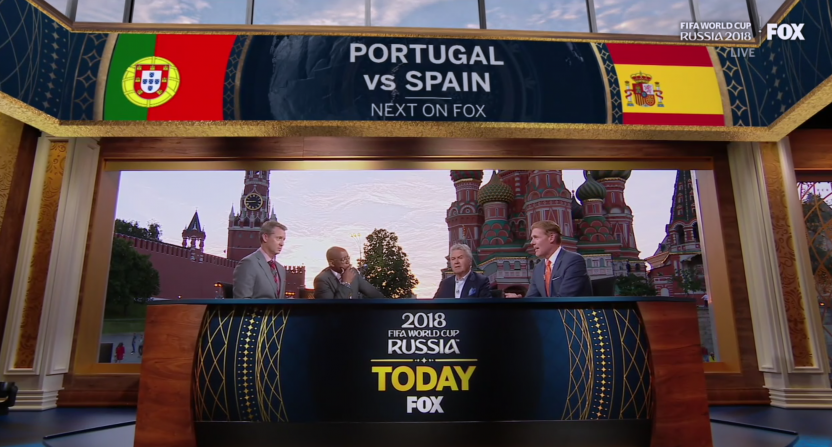 The epilogues are being written for Fox’s 2018 World Cup coverage, but it’s never too early to look ahead to what the network might do for the 2022 tournament in Qatar. I know what you’re thinking, ‘Yes, it is too early, you fool.’ But since official odds have already been released and you can bet on the 2022 tournament just a little under four years in advance, why not?

There was a big focus this year on how Fox would do in the ratings department after they paid so much money to surprisingly take the rights to the world’s biggest sporting event away from ESPN. But the truth is that no matter how hard anyone tries to spin the numbers, ratings were always going to be down from 2014 to 2018. The main reason was also the easiest explanation – in 2014 ESPN got the benefit of a western hemisphere World Cup in Brazil and more favorable timeslots than in Russia, where the majority of the matches were in the early morning or afternoon hours.

Then there was the other elephant in the room – the failure of the USMNT to make the tournament, which had an obviously negative impact on the final numbers.

How might ratings project for 2022? Can Fox turn it around to help justify their $425 million pricetag? The good news for Fox is that Qatar is in the same time zone as Moscow, so at least the timeslots shouldn’t be any worse in 2022 than in 2018 and you’d expect matches to take place once again throughout the daytime. It’s not an ideal scenario, but certainly not the worst case scenario.

Secondly, it should be a safe bet that the USMNT will return to the world stage after the embarrassing effort during qualifying for the 2018 tournament. Of course, we probably all thought that this year when the national team needed just a point at Trinidad & Tobago and couldn’t get the job done. A healthy USMNT presence will certainly do wonders for Fox, especially if they can make it into the knockout round.

However, what may have the biggest impact on Fox’s 2022 World Cup may be the dramatic shift on the calendar as the tournament moves to the winter from the summer to account for Qatar’s desert climate. Did you realize that it gets hot in Qatar in the summer? Apparently it does! Perhaps the FIFA voters neglected that, what with all the corruption taking place around them.

FIFA will transform the global soccer calendar four years from now to accommodate for shifting the World Cup from June-July to November-December. And from a broadcast perspective, it may have the biggest impact on the American broadcasters in Fox. In fact, FIFA basically had to gift the rights to the 2026 tournament to Fox because of the 2022 scheduling fiasco. That is going to represent an amazing windfall for Fox with A) an enhanced 48-team tournament offering many more games and B) a North American tournament with most of the games happening on home soil providing a tremendous boost as well.

Why would FIFA have to do this and make it up to Fox? Because of this little thing called American football.

Any sporting event that has to go head-to-head with football in the fall usually suffers. It’s partially why MLS ratings have always struggled to make any headway whatsoever. It’s why the NASCAR playoffs continue to suffer in the ratings. It’s why the PGA is dramatically reshaping their schedule beginning next year to end their season by Labor Day.

And with the 2022 tournament scheduled for November 21-December 18, it’s going to take place during the climax of both the college and the professional football calendars.

Conventional wisdom would have one think that the increased competition will send ratings for the World Cup down with the increasingly divided attention of sports fans. It’s not only football that takes place during this time of the year – the NBA and NHL will be starting their regular seasons and college basketball will be beginning with marquee early season tournaments. Then there’s the holiday season that takes place with the tournament kicking off right before Thanksgiving.

The most likely scenario will see World Cup games shift from Fox to FS1 on the weekends. NFL pregame shows definitely aren’t what they used to be, but it’s difficult to envision Fox scrapping Fox NFL Sunday for a Tunisia-Serbia group stage game. And if Fox has a particularly juicy slate of football games on the calendar, could World Cup games even shift to FS2? For a channel that is still barely on the radar of most sports fans five years into its existence, that would be a doomsday scenario for the World Cup. Fox was intentional about stacking most of the games this year on broadcast television, but that may be impossible to duplicate four years from now because of their other obligations.

Since we’ve never had a winter World Cup, maybe it’s impossible to fully predict how the numbers are going to do. But it might be best for Fox to prepare now for numbers to go down once again because of factors that are completely outside of their control.