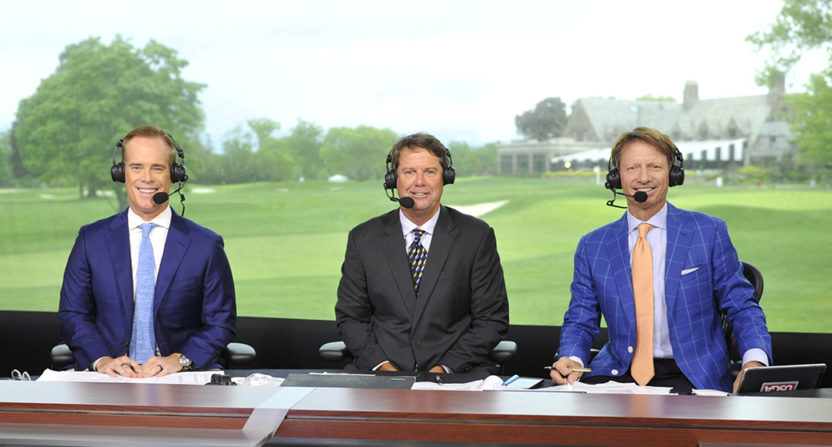 As Fox Sports prepares to air its third U.S. Open, it goes in knowing that the hardcore golf fan still isn’t welcoming it into the sport. A lot of it had to do with its inaugural effort at Chambers Bay in 2015 which didn’t come off well and was heavily criticized. And while its coverage improved significantly last year at Oakmont, fans still haven’t been converted to the point where they feel comfortable. And last week’s brief analysis of the pairings at Erin Hills on FS1’s Undisputed with Skip Bayless and Shannon Sharpe didn’t help either.

The major problem is that Fox only airs USGA events and it doesn’t have other opportunities to air golf. One reason why CBS, NBC and Golf Channel have equity with golf fans is that they regularly air the PGA Tour along with the major tournaments on the calendar.

When Fox came in with the 2015 U.S. Open, it had only aired the Franklin Templeton Shootout the year before and that didn’t give Joe Buck and Greg Norman many opportunities to get practice reps to improve. Of course, the course at Chambers Bay didn’t give Fox too many chances to give great pictures, something that improved at Oakmont last year.

But unlike Jim Nantz, Mike Tirico, Terry Gannon and Dan Hicks who are very familiar to regular golf viewers, Joe Buck only calls the U.S. Open and the U.S. Women’s Open. And it’s led militant golf fans to give him the same treatment they used to give Chris Berman when he called the U.S. Open on ESPN. However, Buck has put in the effort to improve and while he jokingly called Pat Perez “a jerk,” there’s no evidence that the golfers themselves don’t like him.

Fox fixed one issue from 2015 when it jettisoned Greg Norman off the 18th tower and replaced him with Paul Azinger and Brad Faxon.

What can Fox do so it can gain some love from viewers? One way would be to muscle its way into the PGA Tour TV contract when it expires in 2021. Now the PGA can opt out after next year with its network partners, CBS and NBC. If it does, Fox might kick the tires on gaining some tournaments and if it gets a piece of the PGA Tour pie, that would give the network the opportunity to experiment with its coverage going into the U.S. Open. Viewers would get more familiar with Fox’s personalties and perhaps that would ease the vitriol that fans have thrown at the network.

But without more tournaments, the focus on Fox will remain. As it plans to use the latest technology such as augmented reality and shot tracers, it still has a long way to feel the love from golf fans. It may never get the warm embrace, but that doesn’t mean that Fox isn’t going to keep trying to show viewers that it can provide coverage like it does with its bread-and-butter sports like baseball, NASCAR and NFL.