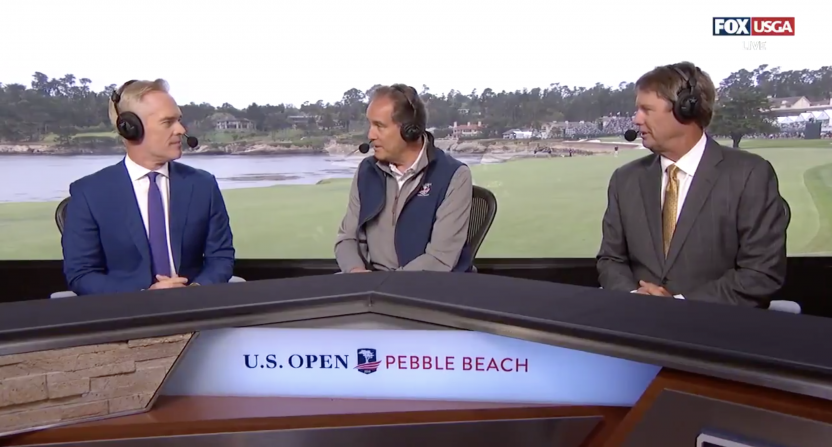 Jim Nantz has been a mainstay on CBS Sports broadcasts for almost 35 years. Apart from his yearly NCAA Tournament appearances on Turner Sports and for The Masters on ESPN, Nantz has pretty much been exclusively with CBS. That’s why it was a bit strange to see Nantz on Fox’s U.S. Open broadcast from Pebble Beach.

Nantz lives nearby and loves the course so much, he not only got married there but also has a replica of the par 3, seventh hole in his backyard. Nantz’s Fox counterpart, Joe Buck, invited Nantz to the booth and spend a few minutes on the broadcast, giving Nantz the opportunity to not only (briefly) work the U.S. Open (which he’s never done before) but to do it at his home course.

Sit back and listen to two of the best… pic.twitter.com/WcSYXhV94l

Nantz wasn’t the first from a ‘rival’ network to show up on Fox’s broadcast. Newly retired NBC analyst and 1973 U.S. Open champion Johnny Miller was interviewed during the first round on Thursday, returning to the tournament he broadcasted for 20 years on NBC.

Fox and NBC analyst Paul Azinger joined Buck and Nantz as they discussed the course and its importance to golf. Another example of how much Nantz loves Pebble Beach, he revealed he collects art from developer Samuel Morse and named his daughter “Finley” after Morse’s middle name.

When you have a career as Jim Nantz has, he has crossed a lot of things off his broadcasting bucket list that it’s tough to find and do things he’s never done yet. Appearing on the U.S. Open, while only for a few minutes, was one of them and it seemed like he had a great time. And it was cool to see someone like Joe Buck appreciate a peer such as Jim Nantz in this way.