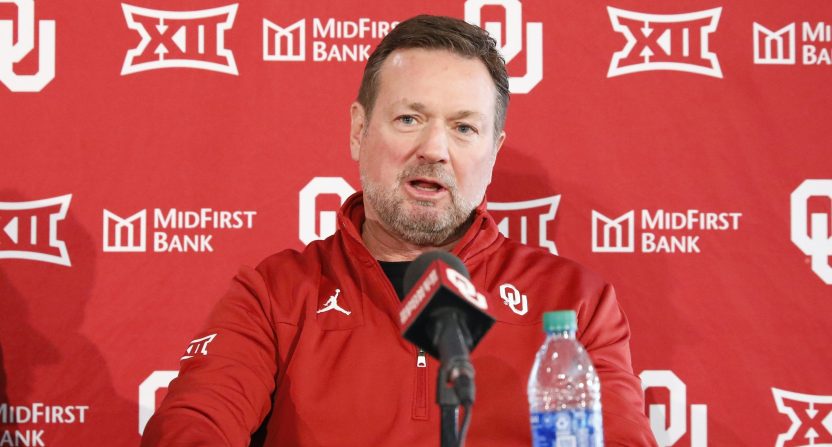 On  Wednesday, the XFL announced the eight head coaches who will be leading their franchises when the league restarts next year. Among them is Bob Stoops, the longtime Oklahoma Sooners head coach who also happens to be the only returning coach from the league’s 2020 season.

Following the second XFL’s indefinite suspension due to the COVID-19 pandemic, Stoops moved into the studio for Fox Sports, replacing Urban Meyer when he left to become the head coach of the Jacksonville Jaguars. We all know how that turned out for Meyer.

A year later, Meyer has been rumored to return to the media world and confirmed this week that he was in talks with Fox. It begged the question of whether or not that meant he would replace Stoops or if there was some other arrangement in the works, especially now that Stoops would be working for the XFL, a rival football league to the Fox-backed USFL.

Stoops stopped by The Middle of the Day Show on WWLS in Oklahoma City on Wednesday to discuss his new XFL gig. When asked what the coaching role would mean for his Fox studio gig, he confirmed that he was no longer working as an analyst for them and would not be appearing in the studio during the upcoming college football season.

“Well, truth be told, yeah, Fox is sponsoring and/or televising all of the USFL football games…so there’s a conflict there,” said Stoops. “Fox really didn’t want to do it because of the direct competition… So that will preclude me from doing Fox being that once it’s 2023 we’ll be in direct competition with Fox.

“But they’re a great team of people. I just so enjoyed and appreciated my time with them. Just great, great people to work with, and had a lot of fun. But yeah, this will preclude me from doing that next year.”

Stoops leaves an analyst void on Big Noon Kickoff and filling that void with Meyer makes too much sense. Fox has a huge stake in Big Ten football and the conference’s overall TV value got a huge boost last year thanks to Michigan’s resurgence. Meyer’s reputation in Columbus, Ann Arbor, and every other Big Ten town moves the meter, presuming he does indeed return to his former seat.