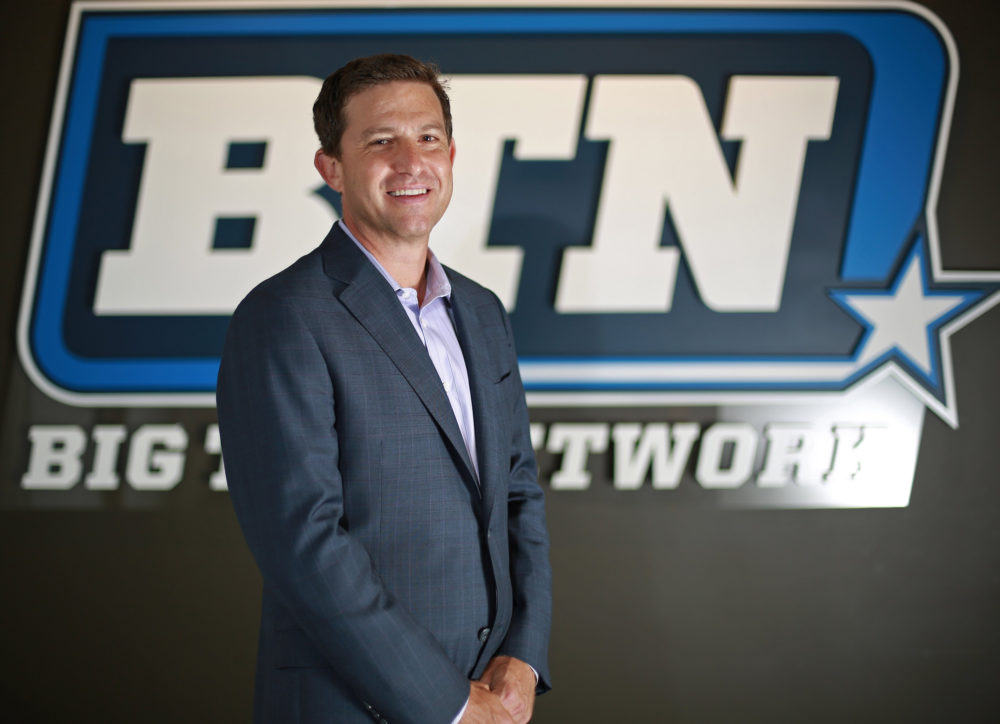 Fox Sports hired Mark Silverman as President of National Networks, a position that has been open since July when the net fired Jamie Horowitz. Silverman, who currently is president of Big Ten Network, will have a bigger role than Horowitz, in that he will oversee all programming, production, marketing and digital for Fox Sports, FS1 and FS2.

Silverman will oversee all the live events and studio shows produced by those nets. Silverman, who was hired 11 years ago as BTN’s first and only president, will also continue to oversee that channel.

The “bigger role” comment appears to be mostly about live event production, as Horowitz seems to have held those other responsibilities. When he was hired in April 2015, Fox said he would “oversee all programming, marketing and scheduling for Fox Sports 1 and Fox Sports 2, reporting directly to [Fox Sports president Eric] Shanks.” However, John Entz was simultaneously promoted to “president, production, and executive producer,” “responsible for all live event production, pre- and postgame coverage, as well as studio and technical operations.” And while Horowitz didn’t initially have control of digital, he controversially took that department over between September 2016 and January 2017, eventually firing all of Fox Sports’ writers and pivoting their website to video clips from their debate shows. (Which hasn’t gone well, to say the least.)

So, although Silverman is still reporting to Shanks, he’s overseeing a lot of things here. That was probably necessary to bring him in; Silverman had been at BTN for 11 years as their first and only president, and oversaw everything from business to content, so he had a very good job in Chicago. There had been speculation about him as a potential Horowitz replacement for a while, but only if Fox could convince him to make the move to Los Angeles, with Ourand naming him as one of six candidates in July and writing “Fox brass would love to convince the well-regarded Silverman to move from Chicago to take this job. But it would take a Herculean sales job to convince Silverman to take a job so heavily focused on studio production, especially considering that he currently runs everything from ad sales and affiliate relations to live event production at BTN.” Well, they pulled it off.

What will be really interesting to watch is how many, if any, of Horowitz’s decisions Silverman reverses. It won’t be easy to go a different route, as Horowitz’s plans seem to have largely been backed by Shanks, and most of them wouldn’t be simple to undo. For example, the move to video was a Horowitz idea, but Shanks endorsed it, and said shortly after Horowitz’s firing that “That was a strategic decision totally endorsed by me and the entire company. Our unique consumer proposition is that we make premium video.” And while that’s destroyed FoxSports.com’s traffic, as it did for several other outlets that made similar moves, it also means they don’t have to pay writers. Moreover, that move is somewhat a “can’t put the genie back in the bottle” one, especially after this amount of time; even if FoxSports.com did return to something similar to what it used to be, it probably wouldn’t get its old audience back (at least not right away), as many of those readers have moved on and don’t view Fox’s website as a destination any more.

Similarly, it’s going to be hard to make drastic changes to FS1 studio programming and its “Embrace Debate” philosophy, at least any time soon. Undisputed co-host Skip Bayless joined the network in August 2016 on a four-year deal in the neighborhood of $25 million, so he’ll be there through 2020 at the least, and you can’t really ask him to do anything other than debate. Colin Cowherd joined Fox in August 2015 on a four-year contract estimated at north of $6 million annually (counting TV and radio work), so he’ll be there through 2019 at least. And while Undisputed and The Herd don’t draw great ratings in general, they seem to have more traction than anything else Fox has tried (outside of NASCAR Race Hub, perhaps). There could be tweaks or cancellations with more marginal shows like Speak For Yourself, but the key parts of the FS1 lineup seem likely to stick around for a while.

Of course, Silverman is also overseeing the successes of Fox Sports, and their live event broadcasts in particular. They’ve done very well with ratings for MLB (the playoffs and the World Series in particular), the NFL, big NCAA games (including their new first choice of Big Ten games) and soccer, and there haven’t been too many major complaints with any of those broadcasts. It will be interesting to see how their 2018 World Cup coverage goes in terms of ratings, especially with the U.S. not being in the tournament, but the 2015 Women’s World Cup suggested Fox will probably be fine on the broadcast side. So there aren’t necessarily a ton of changes Silverman will have to make to Fox’s live events, and those are successes he can perhaps build on.

It’s going to be worth keeping an eye on how Silverman does in this new role. He’s well-respected for his tenure at BTN, and he’s being given what at least looks like a fair amount of power. But FS1 and FS2 are still facing tons of challenges, as is Fox Sports Digital, and none of those have particularly easy fixes. It’s a tough job that Silverman is stepping into, and it will be interesting to see what he does with it.