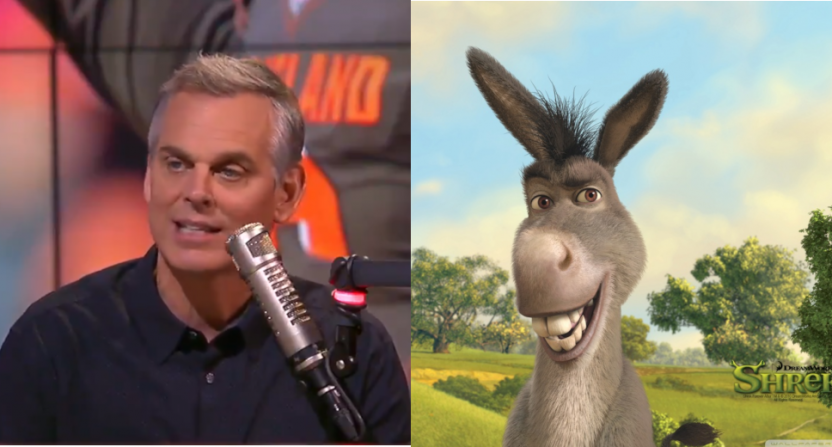 Shall we check in on “more mature network” FS1, featuring “some shows with a little more element of debate and others that are smart, entertaining and interesting to sports fans“? Well, some of that “smart, entertaining and interesting” content Friday involved their highly-compensated, recently-renewed afternoon host Colin Cowherd picking a fight with the Cleveland Browns and Baker Mayfield for the umpteenth time:

"John Dorsey got fired by Kansas City. @BakerMayfield was a walk-on twice and Cleveland's been the laughing stock of the league. They're all peas in a pod. They work together." —@ColinCowherd pic.twitter.com/ojvyM6mABB

What’s really funny there is whoever’s running the Herd’s social media account these days tagging Mayfield, likely hoping that he’d respond. (This is a long-established strategy for Fox’s social media accounts for hot take shows at this point, seen also with things like Undisputed‘s shots at Dez Bryant and Odell Beckham Jr.; they tag the players and then get even more debate fodder out of it when the players respond, especially if the players actually engage with the criticisms.)

And these criticisms are particularly stupid when it comes to Mayfield; you’re going to emphasize “walk-on twice” over “Heisman Trophy winner and #1 overall draft pick?” And walking on twice (even if he didn’t really walk on the second time; he transferred to Oklahoma in December 2013 without a scholarship thanks to Texas Tech interference, but was given one in the fall of 2014) and going on to that level of success seems more worthy of praise than criticism, and there certainly would be lots to go at Cowherd for here. However, that plays right into his hands and gives him more content fuel for the fire, so Mayfield’s decision to respond just with an insult may have been smart:

There are a whole lot of people who would agree with Mayfield on that conclusion, considering Cowherd’s long history of provocative and inaccurate comments. But given that Fox just signed Cowherd to a new deal last summer, and that his show isn’t really “debate” (except with himself), they must see it as “smart, entertaining and interesting to sports fans.” So maybe this illustrates just what that description means to them.

[Baker Mayfield on Twitter; Cowherd photo from The Herd, Donkey photo from WallpapersWide]