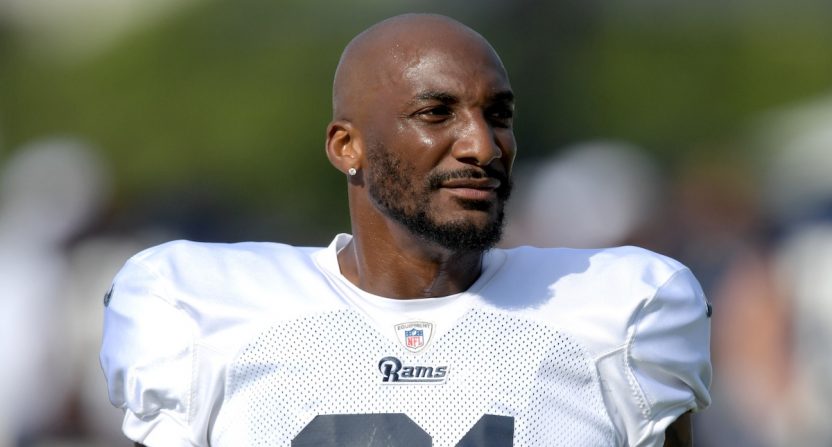 Just over two months after officially announcing his retirement from the NFL, Aqib Talib began the next stage of his career in football. On Sunday, Talib was in the Fox broadcast booth providing analysis alongside play-by-play man Dan Hellie for the Week 10 matchup between the Washington Football Team and Detroit Lions.

Only a small part of the country — the Michigan and Washington, D.C. regions — got the telecast involving the 3-5 Lions and 2-6 Washington. How many were going to watch this game, other than devoted Detroit and D.C. football fans? So Talib’s debut was low-risk, broadcast to Fox’s smallest audience for Week 10.

Of course, many others saw and heard glimpses of the telecast with NFL RedZone and Sunday Ticket. And opinions of Talib’s first time at the mic (publicly) drew a mixed reaction from fans and media.

Aqib Talib has been great on commentary during this Lions game.

Those looking for in-depth analysis and breakdowns of certain plays weren’t getting it from Talib. At least not in this debut broadcast. But Talib made up for it with an exuberance familiar to anyone watching an NFL game with friends and fellow fans.

“Ooh — look at all that space out there, man!” isn’t what you’d typically hear on an NFL telecast. Nor was the candor Talib shared when conveying the players’ mindset. It felt like Talib and Hellie were watching the game with us, rather than calling it for the viewing audience.

Aquib Talib calls a game like an uncle on a porch dishing on folks in the neighborhood pic.twitter.com/jrIqmGaE18

"I'd hold before I'd give up a sack as well" – Aqib Talib with the offensive line analysis I demand.

Aqib Talib making his broadcasting debut on Fox’s Washington-Detroit game. Brings a lot of energy, humor and insight (was like this during interviews when he played). I like the perspective outside of traditional button-down Coach/QB ranks.

Talib’s presentation certainly wasn’t polished, much more conversational in his delivery than we often hear from a broadcaster. Early on, he relied a bit too much on cliches, probably using them as a crutch while he settled in.

But his enthusiasm for the action he was calling was palpable, especially as Washington rallied from a 24-3 deficit to make a competitive game. That brought some energy to a lackluster matchup and created a compelling broadcast.

Loving Aqib Talib on this broadcast. I feel like he wants to curse so bad.

With Fox broadcasting eight NFL games in Week 10 due to CBS’s coverage of The Masters, the network needed extra announcing teams. That created the opportunity for Talib in the Fox broadcast booth and the five-time Pro Bowl defensive back certainly made an impression in his TV debut.

At the very least, Talib should get another game to call — and soon. Keep an eye on the NFL announcing schedules we post every week here at Awful Announcing and circle which game Talib is calling. He’s already become a must-watch (or must-listen) who will likely get better and smooth out some of those vocal tics with more repetitions and the game slowing down for him to offer some more insightful analysis.

It could be a while before Talib draws regular broadcast assignments from Fox and moves his way up the network’s NFL announcing team ranks. But how many broadcasters can draw viewers themselves? Is Tony Romo alone on that list? Talib might already be a strong No. 2 behind him, making a NFL broadcast more fun to listen to than usual.