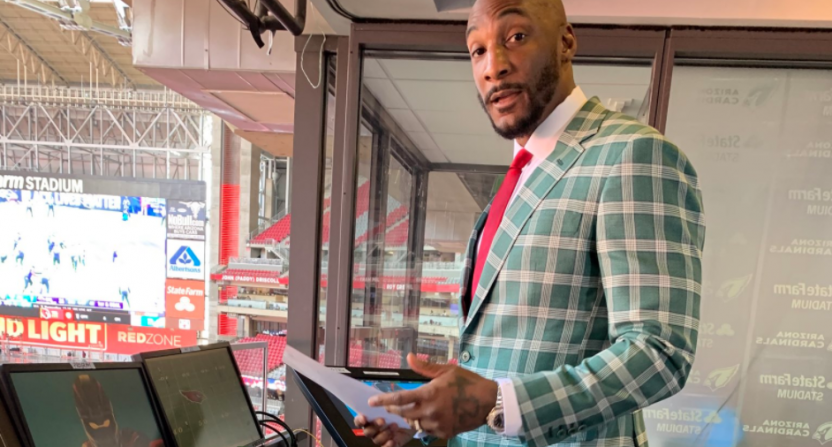 Five weeks after making his broadcasting debut with Fox, Aqib Talib was back to provide analysis for the network’s Week 15 Eagles-Cardinals matchup.

Talib was paired with play-by-play partner Brandon Gaudin and the 4:25 p.m. ET Philadelphia-Arizona game was only broadcast to a small part of the country (and in markets that didn’t get the early game for Fox). And many fans were likely tuned into the Chiefs-Saints clash on CBS. But plenty of viewers still got to hear Talib’s work, thanks to NFL Red Zone telecasts.

Just as it was during his very first telecast, the reaction among fans and media to Talib’s approach was mixed. He doesn’t sound like many of his player-turned-broadcaster colleagues, keeping enthusiasm and personal style to a minimum while trying to convey insight with a vocabulary of football jargon.

Just throw it up and give DeAndre Hopkins a chance, even in double coverage. pic.twitter.com/vKrFdjIYgj

And when we say “style,” we’re referring to Talib’s broadcasting style, not his fashion style. Though that drew feedback as well.

Now how am I supposed to compete with this? ⁦@AqibTalib21⁩ GQ holiday edition for Eagles at Cardinals on ⁦@NFLonFOX⁩ pic.twitter.com/RGQObmJKL6

Aqib Talib is a gift to the airwaves and that suit is majestic pic.twitter.com/lSnJ7SPIsn

Of course, what Talib says during the broadcast and whether or not he’s pleasant, informative listening for viewers is much more important. He doesn’t use many phrases like “gap integrity” and “ball security,” instead conveying joy for watching the game and getting to call the action that has drawn some comparisons to CBS’s Tony Romo.

The former All-Pro defensive back put himself in the shoes of Eagles rookie cornerback Michael Jacquet III, asking “What do you do?” when trying to defend Cardinals receiver DeAndre Hopkins in a one-on-one situation near the end zone.

He also described how players will try to explain their intent when making a play that may have resulted in a penalty. As Talib said, that usually doesn’t work. Intent — such as going for the football — doesn’t matter. The result — Kevon Seymour elbowing Dan Arnold in the head — is what the referees have to go by.

Oh, Aqib Talib? I had no idea.
Well…I rather listen to Aqib than Cris Collinsworth or Booger McFarland.#AqibTalib #Eagles #flyeaglesfly #foxsports #PHIvsAZ pic.twitter.com/zgXegy2f1E

After a few more broadcasts, Talib will hopefully be less likely to rely on clichés and bromides that don’t offer much insight. During breaks in the action, he needs to get better at telling the story of the game or what to look for ahead, especially when the play-by-play announcer sets him up to do so. Naturally, it’s easier to talk while responding to play happening on the field.

Talib sounds different enough from what viewers are accustomed to hearing that he won’t appeal to everybody. But a different voice and approach can make a broadcast more intriguing and sound more exciting. That seems to be the majority opinion on Talib after two NFL broadcasts on Fox.

Thanks for the love! I had a blast! @NFLonFOX

Producers and executives don’t appear to be interested in sanding off the edges and making Talib sound like most other TV analysts. He’s shown potential as a regular analyst and if he’s someone fans might seek out and tune in for when he calls a game, regardless of which teams are playing, that’s a considerable asset for a TV network. Let him do what he does.

Will we see (and hear) more of Talib next season on Fox’s NFL coverage?