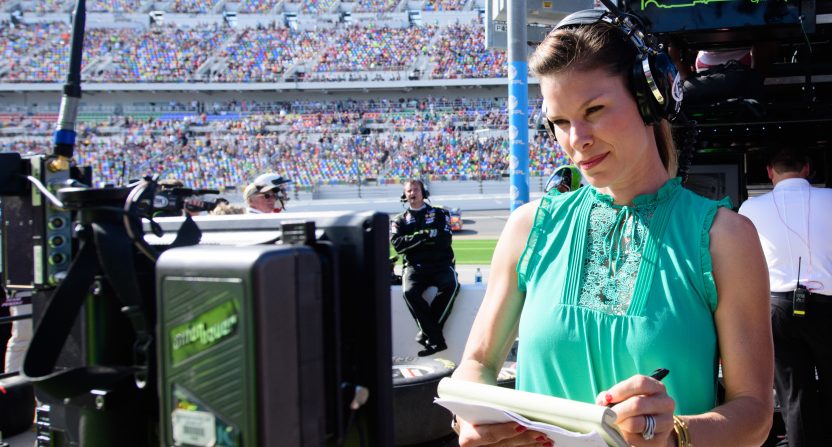 What do fans and potential future pit reporters need to know about pit reporting?

Being a pit reporter is some awesome work, but there are some misconceptions about the job that viewers may have never realized. Whether it’s that pit reporters are essentially working non-stop all day, or they might accidentally appear rude if a fan comes up to them during a race or to remember that everyone is bound to make a mistake on live TV, viewers may want to be aware of some things that pit reporters would like fans to know to better understand the work they do.

Jamie Little: “People always say, ‘Oh my gosh, you do your own hair?’ ‘You do your own makeup?’ ‘Somebody doesn’t feed you those questions that you’re asking [laughter]?’ It’s fun because every year, I do a donation thing where I’ll do a ‘Day in the life of Jamie’ and a fan will be able to hang out with me for an entire race. And by the end of the day, it doesn’t matter who the person is, they’re exhausted for one. And two, they just cannot believe the amount of work that goes into it, the amount of energy that it takes, and the amount of people that I’m able to go up to. Whether it’s Coach Gibbs or it’s Jimmie Johnson, it doesn’t matter, but you’re able to go talk to them in the heat of battle, in the middle of what’s happening and ask them a question or ask them ‘What’s going on?'”

Regan Smith: “It is flat-out from 7 in the morning to it goes green flag. And then when it goes green flag, I feel bad a lot of times because, I don’t want to say I’m rude to people, but they still look at me as a driver. But unfortunately when I’ve got that headset on, I can’t stop and sign autographs. I can’t do the things I would normally do as a driver because my job title is completely different and what I’m trying to get done, I might have a producer yelling in my ear, ‘Get to this pit stall right now!’ And you almost have to run them over sometimes. I feel rude, I feel like a ‘you-know-what’ in terms of when I go bowling over somebody, but I think when I do have the opportunity to stop and slow down or if I see that person again, I’m always trying to be apologetic and make sure they understand why I do what I do.”

Vince Welch: “I would say, since we are all working within the framework of the telecast, we can’t always get every bit of information on the air. As a fan, if you’re a fan of Martin Truex Jr., you want more information on Martin Truex Jr. Unfortunately, there’s maybe another dozen guys that have a chance to win the race that day who might be running great, and there’s seven other people [on the broadcast] that want to talk and we got commercials and graphics and replays. So your time and your opportunity to talk about him isn’t as great as a fan’s willingness to listen or consume that information. So I would say what I would want fans to know and understand is that we’re all working within the framework of the broadcast, and we can’t always talk about your favorite driver as much as you want us to because of the other responsibilities that we have with the show.”

“Also, I think it’s funny that sometimes fans think ‘Oh, they’re not showing the end because they don’t like him.’ We have no agenda, that’s part of the professionalism of what we do at this level that you’re there covering the event. I don’t root for any particular driver; I root for a great race. I don’t care who wins the race. I just want a great storyline during the course of the race for us to tell, and for the fans to find it more entertaining, and for us to do a better broadcast.”

Matt Yocum: “The thing that I wish fans would realize sometimes is that it would be, how do I put this? I guess the thing that I wish fans would take into consideration when they armchair quarterback what takes place on the air is that your job for a split-second notice, or 10 seconds or 30 seconds notice, is to come up with what is happening now. You are ad-libbing, you are shooting from the hip. And it’s funny when you watch some people that are so critical of a moment in a broadcast or a broadcast itself, and it doesn’t matter what sport it is. And you want to say, ‘How about I come by your office and sit over your shoulder and the first minute you make a missed stroke on your keyboard, you go ‘Hey hey hey, what happened there? You missed the ‘Y!'”

“And I think the one thing that sometimes I think comes across, and maybe it doesn’t, is the fact that we are all having such a fun time broadcasting this event for the fan because at heart, we’re all fans. And that’s why we have migrated to NASCAR, to racing because we love the sport of auto racing. And I think that’s where our passion and our job is to bring that passion and that fun through to the viewer.”

The road to being a pit reporter is a very competitive one. It’s certainly a great job and none of these people would ever take that for granted, but it’s certainly difficult and tough to get to being an on-air talent with Fox Sports. Jamie Little doesn’t mince words when she gives advice to people who may want to be a pit reporter or get into broadcasting. Jamie noted herself that throughout her 20s, she worked every weekend and made a lot of sacrifices to forego being out with friends while they were having fun, because that was when she was working and trying to get ahead. That it takes a lot of hard work and sacrifice to get there, and it’s something she would like to see out of those who are coming out of college.

“My advice is, the way that I feel I built my career and my name is I try to outwork everybody else,” Little said. “I mean, you just have to put in the work and I find that there’s a lot of people coming in, younger people that tell me this is what they want to do and I try to help them and I just don’t see that drive to work hard and that just doesn’t work in this business. You gotta be a go-getter, you gotta put your head down and go talk to people that may scare you, may make you nervous. But you can’t be afraid to work in this business, and the ones that work the hardest, those are the ones that succeed.”

Matt Yocum followed along a similar path that it takes hard work and sacrifice in general to be someone seen as one of the best in your chosen field.

“It doesn’t matter if it’s broadcasting or being a veterinarian,” Yocum said. “If you want to be good or be the best, which means basically you’re going to survive and have a career in that field, it’s going to take a tremendous amount of time, sacrifice and it has to become your life. And I feel like no matter what your job is, if it doesn’t mean everything to you and you aren’t willing to sacrifice for it, you need to find something else.”

1. “A quote from my hero Roger Penske, “Effort equals results.” If you’re not all in, you won’t be successful.”

2. “Have a plan. Without a plan, you’re a dart without feathers, you have to know the ultimate destination.”

4. “You can learn a lot about life by watching The Godfather Parts 1 and 2.”

5. “The most important…After college, my mom gave me the poem, ‘The Station by Robert J. Hastings.’ Don’t focus on the destination so much that you don’t enjoy the journey.”

As Fox Sports enters their 19th year of NASCAR coverage, they bring a team who may not be competing in “The Great American Race”, but they’re competing in a “race within a race” to put out a fun, informative show that runs smoothly and is enjoyable not only by those working the broadcast, but for those watching the broadcast at home. The beauty of NASCAR is that, like a traveling circus, once the race ends on Sunday, everybody packs up and heads to the next location. As a race week ends, another begins and it’s up to this crew to recap, prep, and do it all over again.