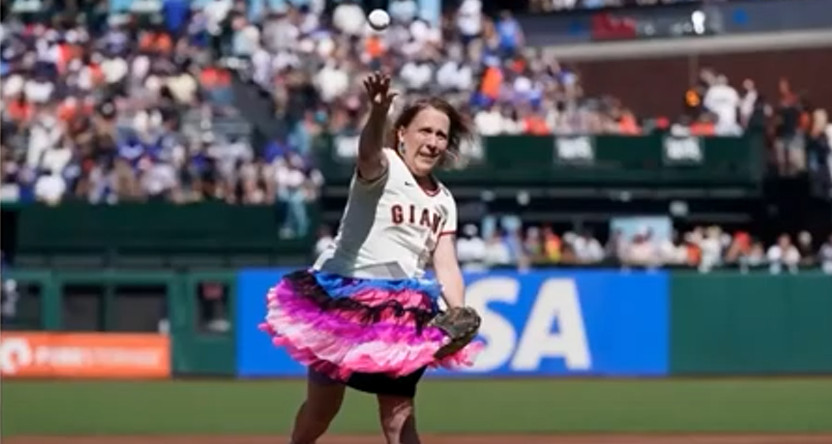 We don’t often see controversies over a MLB first pitch, especially when many first pitches aren’t aired at all these days. But Fox gave us one last Saturday with their broadcast of the Los Angeles Dodgers-San Francisco Giants game. That game was the Giants’ Pride Day, with both teams wearing Pride logos on jerseys and caps, and Jeopardy! champion Amy Schneider (the first transgender Jeopardy contestant to compete in the Tournament of Champions) threw out the first pitch. But the first pitch shown on the national MLB on Fox broadcast was one two days earlier from NASCAR driver Kurt Busch, which Fox used to promote their Sunday NASCAR race coverage, but implied was from the current game rather than a game two days earlier:

That sparked some debate about if Fox had deliberately done that to minimize Schneider and Pride Day, as well as debate on their decision to not tell viewers Busch’s first pitch was from a different game. Interestingly enough, though, the director of that game reportedly reached out to Schneider to apologize later, and said showing Busch’s first pitch instead of hers was only about their desire to promote their NASCAR coverage rather than anything to do with her. Here’s what Schneider told TMZ on that in a story published Sunday morning:

“Jeopardy!” champ Amy Schneider says she’s gonna take Fox Sports at its word, that they did not intentionally cut out her first pitch at a Giants game celebrating Pride Day at the stadium.

Amy tells TMZ … “They say the reason they misled their viewers was for cross-promotion, not anything to do with me, so I’ll take them at their word.” The director of the broadcast reached out to her personally to apologize and reiterate it had nothing to do with her identity. She believed him and accepted his apology.

…Fox Sports said the video of that pitch was part of a promotional package for an upcoming NASCAR race in Northern California.

They made it clear … the intention was not to disrespect Amy, adding first pitches are rarely aired on the Network during games.

Fox is not wrong about that; national broadcasts, such as theirs, tend to show even fewer first pitches than local broadcasts. First pitches are usually not broadcast live, so they mostly show up as a later highlight if the figure throwing one was particularly notable (or if there isn’t a lot worth further discussion from the game thus far). And if they had simply shown no first pitch, this wouldn’t have been a controversy. For the record, here’s a clip from the stands of the pitch Schneider threw:

Fox Sports refused to show Jeopardy champ Amy Schneider throw the first pitch on Pride Day during their coverage of the Giants/Dodgers game. Schneider is a trans icon with the 2nd longest winning streak in Jeopardy history. Here's a clip of her pitch:pic.twitter.com/wgopQZOak1

Even if Fox had only shown Busch’s first pitch and properly identified it as coming days earlier, that probably wouldn’t have sparked much controversy. It made some sense for them to show that, as that first pitch was part of promotion for the upcoming NASCAR race at Sonoma, so it fit right into Fox’s on-air promo for their upcoming broadcast of that race. But the decision to make it seem like Busch’s pitch came from Saturday’s game made it look like they were snubbing Schneider.

It’s positive that Fox’s director reached out to Schneider personally and offered an apology, though. And her decision to take them at their word likely means that we can put this particular controversy to rest. But the situation here is a good reminder to networks to be honest with viewers about what they’re showing, even if honesty makes their cross-promotional attempts slightly less natural.