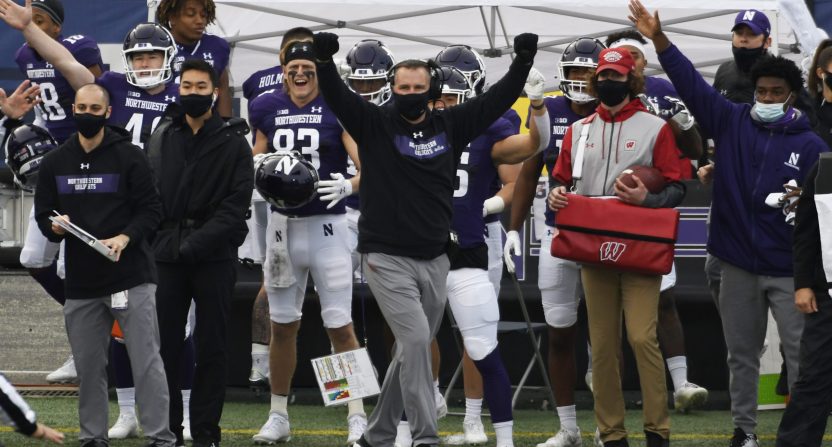 It’s been a long, strange trip for the 2020 Big Ten college football season, so it makes a weird bit of sense that it will end in the most unlikely of places…Noon.

The Big Ten and Fox announced that the 10th annual Big Ten Football Championship Game will move to Fox’s Big Noon Saturday time slot on Saturday. December 19. As part of the festivities, the Big Noon Kickoff broadcast crew, which includes host Rob Stone and analysts Urban Meyer, Matt Leinart, Reggie Bush, and Brady Quinn, will be live from Indianapolis for a two-hour pregame show at Lucas Oil Stadium before kickoff. Gus Johnson and Joel Klatt will call the game with reporter Jenny Taft on the sidelines.

The 2020 @B1Gfootball Championship Game moves to @CFBONFOX's premier BIG NOON SATURDAY time slot, kicking off at 12:00 PM ET on Saturday, Dec. 19.#BigNoonKickoff will be LIVE from Lucas Oil Stadium in Indianapolis beginning at 10:00 AM ET. pic.twitter.com/pBO5tkSJpu

The Big Ten Championship Game is routinely played in primetime, as it was last season when the Ohio State Buckeyes won their third-straight conference crown, defeating the Wisconsin Badgers following an 8:00 p.m. kickoff.

It is hard, of course, to see the state of the Big Ten and recent game cancellations and not see a connection between the move from primetime to noon, even if Big Noon Kickoff has been a strong performer for Fox and the conference. While Ohio State and Wisconsin once seemed on a collision course to meet again for the conference title, a result that would please everyone involved, a few things have happened in the last two weeks to change that, altering the landscape for the Championship Game’s potential.

Wisconsin is already ineligible to play for the conference crown because they’ve had too many games canceled. That clears the path for the Northwestern Wildcats, who are in the midst of a fantastic run, but lack the national appeal that the folks at Fox might hope to see out of a Big Ten Championship Game participant.

Ohio State’s game against Illinois this weekend was canceled, which puts the Buckeyes right up against the line they need to meet in order to qualify for the Big Ten Championship Game. Here’s what our Andrew Bucholz said at the time:

That may lead to some interesting discussions ahead, as Big Ten protocols mean confirmed positive tests have players out for 21 days. Ohio State’s game against Michigan State next Saturday certainly could be under threat as well, and even their famed rivalry game with Michigan on Dec. 12 may not be certain to go ahead. If either or both of those games goes down, Ohio State (currently 4-0; they lost a game earlier this year thanks to a COVID-19 outbreak at Maryland) wouldn’t appear to be eligible for the Big Ten championship game, with the conference currently requiring a minimum of six games played to be eligible for that. However, it’s notable that the College Football Playoff itself has no minimums for games played.

So while there are still many possibilities regarding canceled games and potential losses, there is a genuine possibility that the 2020 Big Ten Championship Game could be something like Northwestern vs. Indiana, which is hardly the primetime match-up that Fox would hope for (all due respect to the Wildcats and Hoosiers). Hence, the Big Ten title game is now a Nooner.

Of course, depending on what happens in the coming weeks, we could still see the Big Ten alter the rules. It’s not out of the realm of possibility that they could alter the rules to allow an undefeated Ohio State to play for the conference championship, especially if a College Football Playoff berth is on the line. In fact, there’s even a contingency that could make it happen automatically that is not out of the realm of possibility.

Clarification from the conference on the math behind the Big Ten Championship Gm eligibility rules: Assuming the 4 remaining games today are played, 12 of the 14 gms scheduled for the final 2 wks would need to be canceled for a team to qualify for Indy w/ fewer than 6 gms played.

Given the weirdness of this college football season and the extreme number of games that have been canceled or postponed in recent weeks, that scenario is still very much in play, even if the Ohio State Buckeyes don’t play.