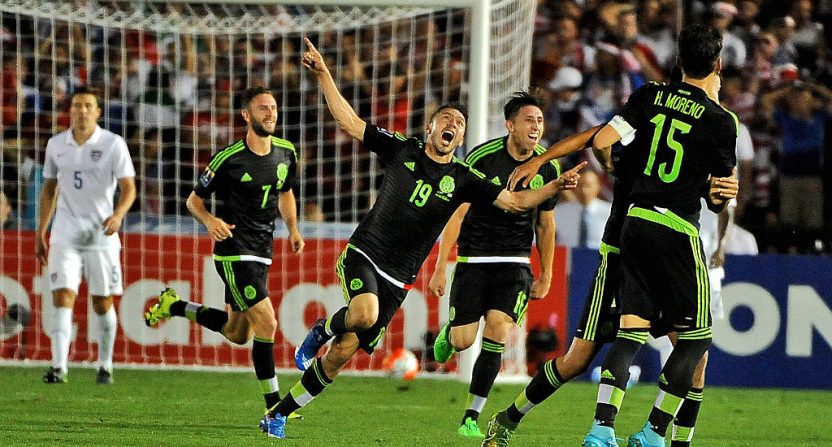 It looks like there are going to be some big changes when Fox takes over the World Cup in 2018, and one of those may involve the amount of attention paid to Mexico. Anthony Crupi of Advertising Age has an interesting piece on the larger and larger role Fox’s sports programming is playing in its pitches to advertisers in general, but the discussion of the 2018 World Cup and how the network plans to approach it is perhaps particularly notable. One major change? From what Fox Sports president Eric Shanks told Crupi, it sounds like the network will be heavily targeting not just fans of the U.S. national team, but also fans of the Mexican national team.

Shanks says his team learned a great deal during its stewardship of the 2015 Women’s World Cup, and will apply those lessons to next year’s tourney. “We know how to activate this country, and who to target, in order to get the most anticipation and viewership for the World Cup,” Shanks says, adding that in a bid to siphon off English-speaking Hispanic viewers from Telemundo, Fox will cover the Mexican national squad “as if it’s a second home team.”

That’s interesting, and it certainly could have upside, but it also comes with potential perils. The U.S. national team’s rivalry with Mexico would suggest there are lots of American soccer fans who won’t be thrilled to see extensive coverage of the Mexican team, especially if they’re treated as “a second home team.” And it’s far from clear that Fox will be able to take too many English-speaking Hispanic viewers from Telemundo. There’s definitely a chance they could expand their audience if all goes well, but if this isn’t handled carefully, it might lead to alienation of some viewers they already have.

Of course, this isn’t entirely new. Fox has tried to draw in viewers who care about Mexican soccer before, particularly with a deal struck last February to air the Mexican national team’s friendlies and World Cup qualifiers on FS1. But there’s a big difference there; those seem like events you can get a new audience to tune into without as much risk of alienating the current one, as many of them are probably not watching Mexico games that don’t directly impact the U.S. team. Favorable coverage of the Mexican team during an event like the World Cup that U.S. fans are intensely tuned into might not go so well.

This wasn’t the only World Cup note from Crupi’s piece. Unsurprisingly, Fox is targeting younger viewers (a key soccer demographic, and also a key demographic for advertisers), but something particularly interesting is that they plan to show a lot of games on the Fox broadcast network.

Fox also plans to go all-in on teenagers, which represent the first generation of Americans who recognize that soccer is no longer a niche sport, as was made evident by the 25.4 million viewers who watched USA beat Japan in the 2015 Final. Naturally, Fox will make the matches available on every conceivable platform, but to ensure the greatest possible linear TV audience, it also plans to schedule an unprecedented number of World Cup games on its free-to-air broadcast network.

That says a lot about how important Fox sees this as, and how they’re looking to maximize the overall audience, not just pump up their cable networks. However, it’s also a move that may come with some risk, especially considering the time zones. The 2018 World Cup will be played in 11 cities across Russia in time zones ranging from UTC+2 to UTC+5, seven to 10 hours ahead of Eastern Time, and most matches are likely to take place during the workday in U.S. time zones. That may pose some challenges with Fox affiliates and with the programming that normally airs at those times.

Overall, it certainly looks like Fox is planning to shake a few things up for the World Cup. It should be noted that their coverage of the 2015 Women’s World Cup drew plenty of praise, and they may well be able to pull off a successful 2018 broadcast. And it could be very lucrative for them, especially if the U.S. and Mexico are both able to qualify. (The USMNT is currently fourth out of six teams in CONCACAF qualification after four out of 10 matches, and are in a playoff-required berth instead of an automatic one; they do have some favorable matches coming up, and are generally expected to be able to make it, but are not a lock. Mexico is in better shape, leading the group with 10 points through four matches, but they’re also not assured of a berth just yet).

It sounds like Fox is going to be making some bold and ambitious moves, though, especially with that targeting of fans of the Mexican team and with the emphasis on the broadcast network. Those could pay off, but they also carry some substantial risks. We’ll see how this develops as the World Cup draws closer.