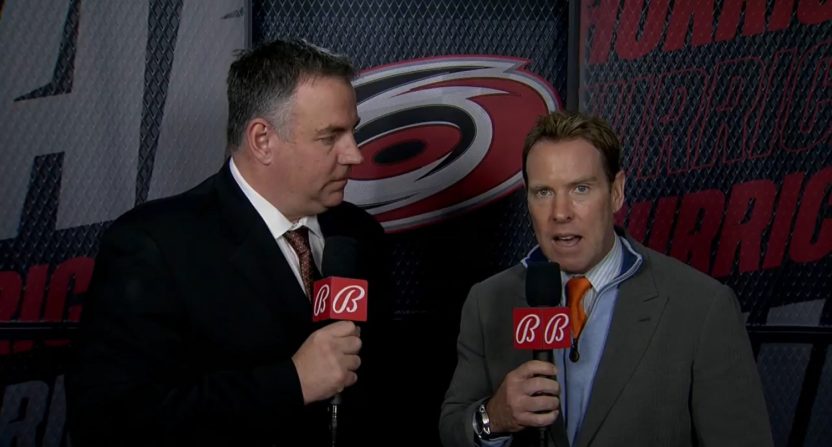 While sportscasters already know to be on high alert when saying things like “bulging disc,” they should add Reese’s Pieces Peanut Butter Cups to the list.

Reese’s Pieces are great, Reese’s Peanut Butter Cups are better. But did you know you can get a combination of both? They’re real and they’re spectacular, but they’re also capable of causing quite a slip of the tongue.

Monday night, Carolina Hurricanes broadcaster Tripp Tracy was lauding the team’s fast start to the season. And as the former NHL goalie compared it to the white whale of Halloween candy, he accidentally said “penis.”

“If you said that you were going to go 6-2-1 in October,” Tracy began. “I would have taken that and run for the hills like I just absolutely hit the lottery with a bunch of Reese’s Penis Peanut Butter Cups trick or treating.”

I can only assume the use of “penis” was a malapropism for “pieces” and this isn’t some sort of new X-rated candy. Tracy and Hurricanes play-by-play voice Mike Maniscalco attempted to gloss over the mistake, but blatant use of the word “penis” is hard to ignore, even for the most mature of hockey fans.

This had to have been a preconceived analogy by Tracy, there’s no way he came up with comparing a 6-2-1 record to Reese’s Pieces Peanut Butter Cups on the fly. And there’s no way he could have anticipated “penis” is how his creative Halloween commentary would be remembered.