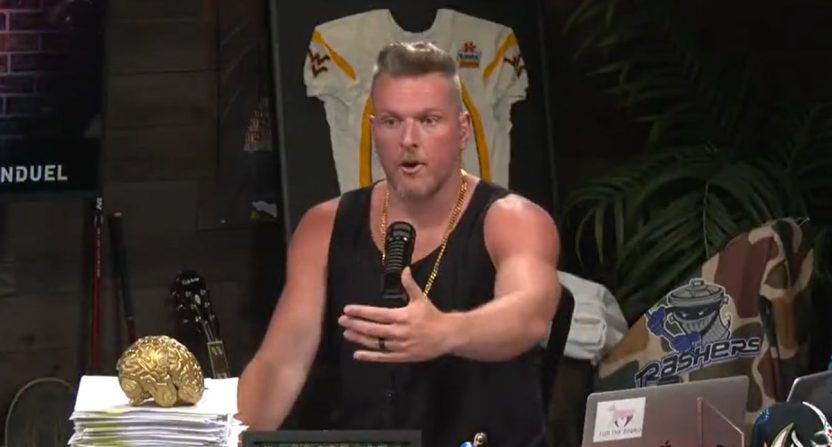 The Nathan’s Hot Dog Eating Contest is not for everyone. Watching ESPN cameras zoom in on Joey Chestnut and other competitive eaters as they grab, dunk, gag on, and consume fists full of hot dogs can be grotesque, especially if the popular grill item is about to grace your menu that afternoon. But King has repeatedly blasted the American tradition, competitive eating, and ESPN for bringing attention to the event while there are starving children in the country.

I don’t have a prediction.
But would you mind a comment?
In a country where 1 of every 6 children go to bed hungry, competitive eating is disgusting. https://t.co/g147KMgoFA

Tuesday afternoon, Pat McAfee said King’s 2022 tweet condemning the event was not lost on him, with the former NFL punter and current SiriusXM Radio host declaring his intention to make a big hot dog donation to food banks.

Peter King brought up a pretty good point.. I will be donating 10,000 hot dogs ??#PMSLive pic.twitter.com/AgIsydZ9s5

“Peter King brought up a pretty good point,” McAfee said on his radio show. “I didn’t even think about it, to be honest, because I think we all assume that hot dogs are a never-ending commodity. You can never stop making hot dogs because no one knows what is in hot dogs.”

This is not the first time King has condemned the event. In 2019, King tweeted shame on ESPN for “highlighting gluttony,” which prompted Joey Chestnut to defend the sport he dominates.

ESPN and the @30for30 franchise has done some really great docs and journalism.
A shame that as at least a fifth of children in America go to bed hungry nightly they’re highlighting gluttony, treating someone who overeats excessively as a “competitive athlete.” Truly disgusting.

Unlike Chestnut, McAfee was inspired by King’s narrative, responding Tuesday by announcing that he will be donating 10,000 hot dogs to homeless shelters around the United States.

“Peter King probably could have done this as well,” McAfee added of his donation. “I assume he will, but him putting out a tweet about hot dogs being shoved down your face made me think ‘you’re right.’ We should think about that stat about people going to bed hungry.”

Not only do the 63 hot dogs that Chestnut consumed during the Fourth of July eating competition pale in comparison to the more than 200 billion pounds of food wasted by America every year, but Nathan’s makes an annual donation of 100,000 hot dogs to the Food Bank for NYC.