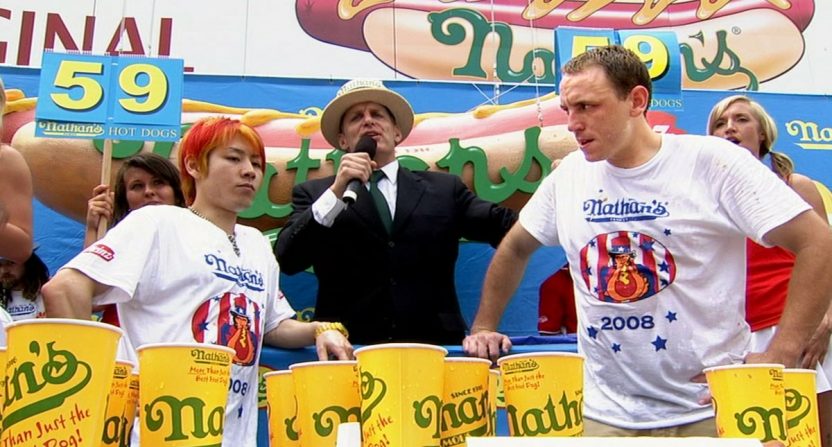 Those who enjoy the annual Fourth of July Nathan’s Hot Dog Eating Contest will be able to keep finding it on ESPN’s platforms. ESPN has televised that event since 2004, and while it’s sometimes had some controversies (from only streaming the women’s event while televising the men’s event to repeated crashes of the feed to criticism from those who don’t like it), it’s generally seemed to be useful Fourth of July programming for the network. And that relationship’s now set to continue, with ESPN announcing Monday they’ve signed an extension with the International Federation of Competitive Eating (which puts on this event and others) to keep showing the annual contest (seen above a few years ago) through 2029:

Here’s more on that from a release:

ESPN recently announced it has signed an extension with the International Federation of Competitive Eating (IFOCE) on a new, multi-year deal to keep ESPN as the exclusive domestic partner for the Nathan’s Famous Hot Dog Eating Contest through 2029.

“You can’t beat the spectacle that is the Nathan’s Famous Hot Dog Eating Contest,” said John Suchenski, ESPN Director of Programming & Acquisitions. “It’s a sports calendar and Fourth of July staple, one of those classic, timeless events we know fans look forward to every year. It has had memorable moments over the years, and we’re ecstatic that many more will be on our platforms for the foreseeable future.”

Last year, the event returned to the corner of Surf and Stillwell Avenues in Coney Island, where professional eater Joey Chestnut defended his Mustard Yellow Belt for his record-setting 15th victory on the men’s side, and had professional eater Miki Sudo return to the head position on the podium for her eighth Pink Belt.

Rich Shea, president of Major League Eating, said: “We’re thrilled to extend our agreement with ESPN and ensure that viewers will continue to join in this great July Fourth tradition. ESPN is a fantastic broadcast partner and they capture the spirit of the event perfectly.”

It is interesting to see this particular ESPN tradition continue. A lot’s changed at that company since 2004, and more change may be ahead, especially with things like this year’s sale of the X Games to an outside group. Just because something has been shown on ESPN in the past doesn’t mean it always will be, as the new Big Ten deals without the network show. And in an era where there are countless streaming services, and many of those streaming services are getting into showing live events, this contest probably had some non-ESPN options to consider. But ESPN still comes with significant reach, and for this contest in particular, it comes with the value of being where people expect to find it. And that’s now going to continue for seven more years.