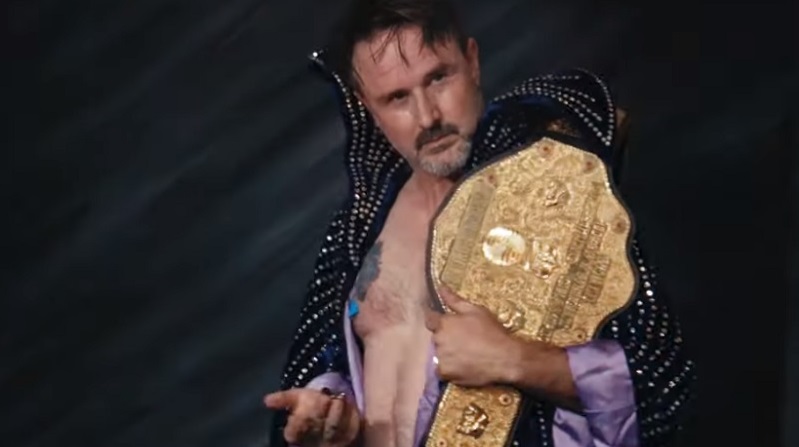 The wrestling documentary You Cannot Kill David Arquette was set to premiere March 15 at the South By Southwest Film Festival in Austin, Texas. But as has happened with so many events during the past few weeks, SXSW was canceled because of the coronavirus crisis.

Without that showcase and possibly getting acquired by a theatrical or streaming distributor, You Cannot Kill David Arquette currently doesn’t have a release date. However, producers have released a teaser trailer for the documentary which may generate enough interest among film and wrestling fans to attract the attention of a streaming platform. (A theatrical distributor could still enter the mix, but when will movie theaters open again? And how many documentaries typically find success in theaters anyway?)

Check out the preview, which teases a potentially compelling film:

Arquette originally began his flirtation with professional wrestling in 2000 after filming the wrestling comedy Ready to Rumble, set in the now-defunct World Championship Wrestling organization. The actor was written into WCW storylines, feuding with Eric Bischoff and teaming up with Chris Kanyon and Diamond Dallas Page. Within weeks of joining WCW, Arquette won the WCW World Heavyweight Championship as a result of winning a tag-team match setting him and Page against Bischoff and Jeff Jarrett.

Though Arquette was mostly a comedic character in WCW storylines and viewed by fans as a joke, he actually successfully defended his title in one match and held the championship for 12 days. But in a pay-per-view event, Arquette turned heel, betrayed Page, and gave the title to Jarrett. His tenure with WCW only lasted another three months.

“It had always bugged me, the way fans took it. I didn’t mean to be this disgrace on wrestling,” Arquette told the Los Angeles Times. “When the International House of Pancakes changed their name to International House of Burgers, someone said, ‘That’s a worse idea than making David Arquette the WCW champion.’ I’m like, ‘18 years later, I’m the low bar?’ I was sick of the bullying, and I wanted to stand up and rewrite the ending.”

Directed by David Darg and Price James, You Cannot Kill David Arquette follows the actor’s attempt to return to pro wrestling in 2018 following a heart attack. He began performing with the Championship Wrestling from Hollywood promotion and tried to work his way into All-Elite Wrestling (AEW). As you can see from the trailer, it’s not always a funny story to watch. (If you’re not a fan of Arquette and his antics, you might not think it’s funny at all.) But Arquette’s struggles with addiction are a big part of the documentary and people close to him — such as ex-wife Courtney Cox and sister Patricia Arquette — are interviewed about his behavior and this entire endeavor.

In an interview with Indiewire, Arquette said he’s been auditioning for roles during the past decade to no success. The hope is that producers and executives will view him differently after watching this documentary, his “love letter to wrestling.”

Arquette showed the film for friends and family in Austin after SXSW was canceled. But getting the documentary in front of the people who decide whether or not films are purchased for theatrical or streaming release is the problem now. Until then, it’s not certain when or where we’ll get to see this movie. But the trailer is still available to enjoy, even if it might make you cringe.