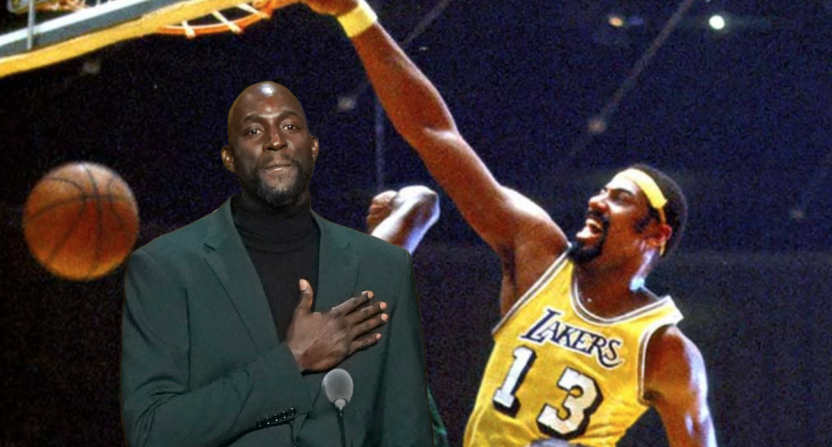 Kevin Garnett’s production company, Content Cartel, is taking on a big project for its new development deal with Village Roadshow Entertainment Group to produce scripted and unscripted content for TV, film, and digital platforms. The first venture these two companies will partner on is a feature-length documentary about basketball legend Wilt Chamberlain.

It’s almost surprising that there hasn’t already been a documentary about one of the greatest players in basketball history. But we’re now in a golden age of sports documentaries when all kinds of stories are being told and Chamberlain’s is certainly worthy of a feature-length film.

Chamberlain led the NBA in scoring seven times during his 14-year career, while also leading the league in rebounding 11 times and field-goal percentage in nine seasons. He’s the only player in league history to average at least 30 points and 20 rebounds per game in a season — and he did that seven times. Chamberlain even led the league in assists, averaging 8.6 during the 1967-68 season. He also averaged 30.1 points and 22.9 rebounds for his career, the only NBA player to ever do so.

Besides the individual achievements, Chamberlain won two NBA championships — one in 1967 with the Philadelphia 76ers and another with the Los Angeles Lakers in 1972 — four league Most Valuable Player awards, and Rookie of the Year honors. He was named to 13 All-Star teams. And he was the NBA’s all-time leading scorer until Kareem Abdul-Jabbar overtook him in 1984. (Chamberlain’s scoring total now ranks seventh in league history.)

Chamberlain was elected to the Naismith Memorial Basketball Hall of Fame in 1978. Naturally, he was named as one of the 50 greatest players in NBA history for the league’s 50th anniversary. He passed away due to congestive heart failure in 1999 at 63 years old.

That should be enough to fill a couple of hours’ worth of documentary, right?

Related: Kevin Garnett documentary, ‘Anything is Possible,’ to premiere on Showtime Nov. 12

OK, maybe this film could get into a few of the more salacious aspects of Chamberlain’s life too. For all the numerical achievements mentioned above, the one that may be most impressive to some people is Chamberlain’s claim in his 1991 autobiography, A View From Above, that he slept with 20,000 women during his life.

As you can see in that clip from Late Night With Conan O’Brien, Chamberlain was a very charismatic personality. (Some might say that 20,000 women figure speaks for that.)

But he also stayed extremely fit after retiring from basketball and contemplated comebacks in his 40s. Chamberlain pursued a movie career and fought Arnold Schwarzeneggar as Bombaata in 1984’s Conan the Destroyer. He intended to play himself in a biopic about his life.

Gotham Chopra from Religion of Sports will direct the documentary, with Content Cartel, Heeltap Entertainment, and Adam Sandler’s Happy Madison producing the project. (Though Sandler and Garnett co-starred in 2019’s Uncut Gems, Happy Madison wasn’t a producer on that film. But apparently, the two decided to collaborate in the future.)