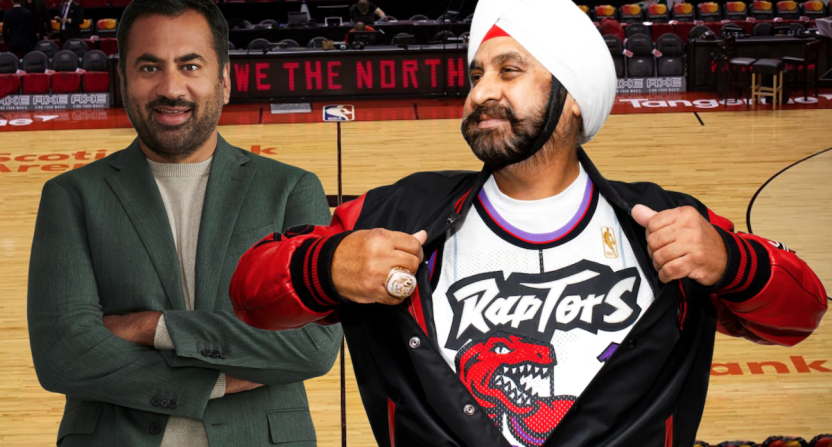 Nav Bhatia’s fanatical fandom of the Toronto Raptors earned him induction into the Naismith Memorial Basketball Hall of Fame and an NBA championship ring. Up next, his story will be told on the big screen.

Kal Penn will produce and star as Bhatia in Superfan, according to Deadline. He’ll portray the Raptors’ devoted supporter, who hasn’t missed a home game in Toronto since the expansion team joined the NBA in 1995. (That streak ended when fans weren’t allowed to attend games during the COVID-19 pandemic, while the Raptors finished out the 2019-20 season in the Orlando bubble then played the 2020-21 season in Tampa, Florida.)

Bhatia’s story is certainly worthy of a movie treatment. He moved to Toronto in 1984 to escape India’s anti-Sikh riots. Despite his expertise as a mechanical engineer, Bhatia couldn’t find work in that field and had to take various odd jobs before becoming a car salesman at a Hyundai dealership. During a three-month span, he sold 127 cars (believed to be a record) and eventually became so successful that he bought the dealership.

That success also made Bhatia a multi-millionaire, one who could afford courtside seats for Raptors games by the time the team moved into what’s now Scotiabank Arena and made himself a presence. In 1998, Raptors executive Isiah Thomas officially named him the team’s Superfan and presented him with a special jersey. He received a championship ring when the Raptors won the 2019 NBA title and played a leading role in the celebratory parade.

In 2018, Bhatia launched the Superfan Foundation, a non-profit organization that raises money to build or refurbish basketball courts and run camps in Canada and throughout the world. As he told the Toronto Sun, the intention is to provide an opportunity for young kids to integrate with one another so they don’t experience the same discrimination he did throughout his life.

I made a promise as a kid to my mom i would never remove my turban. Today it is in the Hall of Fame. Embrace what makes you different. It is your superpower. This is the crown I wear each day. Thank you mom. pic.twitter.com/s6cCjxbdhR

Thank you to the @Hoophall @NBA.@Raptors. Thank you Jimmy Goldstein for the honour.Thank you to my manager Rinku for helping take the Superfan to another level. Thank you to my daughter Tia and my wife Arvinder for making the ultimate sacrifice for this Superfan. pic.twitter.com/dG0WiTZ83X

“I’ve been researching and following Nav’s incredible story ever since I saw him at a Raptors game the year we started filming Designated Survivor in Toronto,” Penn told Deadline. “The crowd loves him. To see what a source of pride he is for Canadians – and all basketball fans, really – makes me smile. His story is one of unity, which I’m especially excited and proud to bring to life.”

Penn has been prominent in the news himself recently, releasing a memoir titled You Can’t Be Serious in which he recounts his career as a young actor of color in films including Van Wilder, Harold & Kumar Go to White Castle and The Namesake, TV shows House and Designated Survivor, and becoming a staffer in the Barack Obama administration. The book has also drawn headlines for Penn coming out as gay and revealing he’s engaged to his partner of 11 years.

I have absolutely no issues in making this a regular occurrence lol.

Honoured and humbled to receive this ring from @baronchampionshiprings and @hoophall

I wear this with immense pride and responsibility to carry on spreading the game I love. pic.twitter.com/FmisroHpII

“I’m speechless. To have the opportunity to continue to tell my story with such esteemed producers is a dream,” Bhatia told Deadline. “Then to find out Kal Penn has been brought on to play me is even more surreal. This is not something I can even dream of. He is one of my favorite actors and to know he also loves basketball is an added bonus. I’ll be teaching him all my tricks of the trade when distracting opposing players!”

Bhatia will also be the subject of a CBC documentary, that is airing Friday, Dec. 3 on the network and will be available for streaming online. The trailer for the film can be seen above.