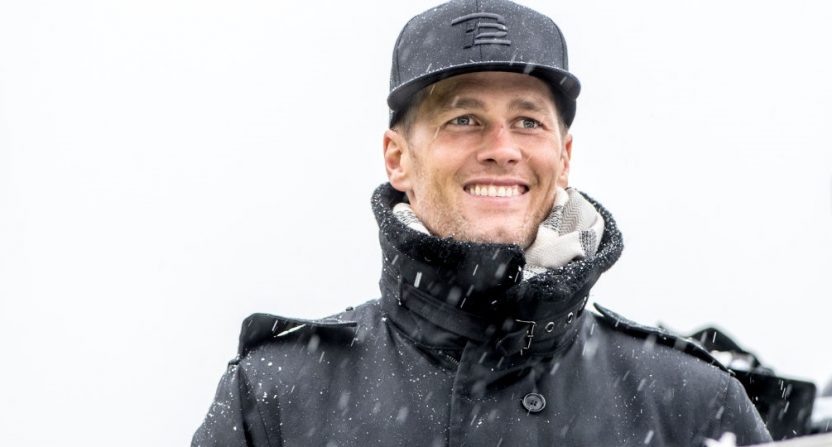 We may never see anything more exciting or compelling than Tom Brady’s performance in rallying the New England Patriots to an improbable 34-28 overtime victory versus the Atlanta Falcons in Super Bowl LI. But Hollywood may give it a try anyway.

As reported by Deadline’s Anita Busch, writers Paul Tamasy and Eric Johnson are working on a script that will follow the Patriots’ Super Bowl victory, but also everything that led up to that triumphant moment. Yes, that means we’ll essentially be getting “Deflategate: The Movie.” Much of the story will focus on the team’s conflict with the NFL and commissioner Roger Goodell throughout 2014, the investigations and court battles that ensued, culminating in Brady’s four-game suspension to begin the 2016 season.

Additionally, Tamasy and Johnson will be collaborating with Boston journalist Dave Wedge and author Casey Sherman for a book that will chronicle the same story, providing a behind-the-scenes look from several people associated with the Patriots and their experiences during the entire Deflategate debacle. Wedge had previously partnered with Sherman for the book Boston Strong: A City’s Triumph Over Tragedy, which was source material for the film Patriots Day, directed by Peter Berg and starring Mark Wahlberg, that was released earlier this year.

This also won’t be the first Massachusetts true-life story that Tamasy, Johnson and Sherman have worked on together. The screenwriters adapted Sherman’s book The Finest Hours into a feature film starring Chris Pine and Casey Affleck that was released in theaters last year. That book and movie depicted the 1952 Coast Guard rescue of the crew from the SS Pendleton, which had been ripped in half by a nor’easter off the coast of Chatham, Massachusetts.

A story about Brady and the Patriots will be Tamasy and Johnson’s third foray into the world of sports, as well. The two wrote the script for 2010’s The Fighter, a biopic about Irish boxer Micky Ward (which also took largely took place in Massachusetts and starred Mark Wahlberg). In addition, the writing pair penned the screenplay for a movie currently in development about Leicester City’s implausible run to the English Premier League championship last year.

So who will play Brady in this feature film? Mark Wahlberg is probably out. Matt Damon wouldn’t be a good choice either, though Ben Affleck might fill the role better physically. How about Armie Hammer, who portrayed the Winklevoss twins in The Social Network? He’s brown-haired, tall and handsome. And Luke Wilson can reprise the part of Roger Goodell, after playing him in 2015’s Concussion, right?

This could be a hit — assuming that anyone actually wants to see a movie about Deflategate after it hijacked sports headlines for the better part of two years.

Of course, Brady could also play himself. He did excellent work as Tom Brady in Ted 2.