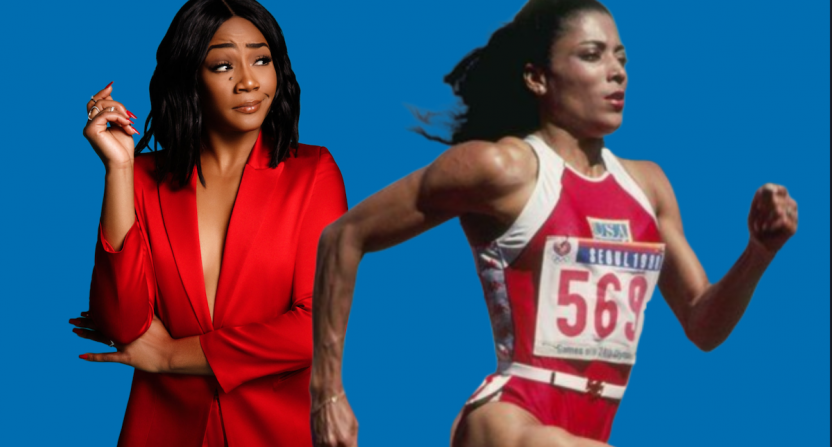 Since her breakout role in 2017’s Girls Trip, Tiffany Haddish has been one of the busiest actors in Hollywood, appearing in several movies and TV shows (including voice roles in animated projects). Such fast-rising success has also given her the influence to push for roles and projects she really wants.

Haddish will also produce the Flo-Jo biopic in partnership with sports content company Game1. Co-CEOs Greg Economou and Basil Iwanyk (who’s produced the John Wick and Sicario series of films, among many others) are also producers on the project. Additionally, Game1 and Haddish are developing an accompanying documentary series and podcast about Griffith-Joyner.

Known primarily as a comedic actor who also performs stand-up comedy, Haddish probably isn’t the first name people might pick to portray Griffith Joyner. But the Olympic star was one of Haddish’s heroes growing up, and she has played some dramatic roles in movies such as this year’s On the Count of Three and Here Today, along with 2019’s The Kitchen.

My Heart is so full Right now! I can’t even explain how hard I am going to work to honor Her Legacy! https://t.co/Ph4pdtkYii

“I am looking forward to telling Flo-Jo’s story the way it should be told,” Haddish said in the production’s official announcement (via The Hollywood Reporter). “My goal with this film is making sure that younger generations know my ‘she-ro’ Flo-Jo, the fastest woman in the world to this day, existed.”

Haddish has already begun training for the role, working with Griffith Joyner’s widower and former coach Al Joyner. Many of Flo-Jo’s same training methods and routines are part of her regimen. Joyner is also a producer and creative consultant for the film.

Besides her phenomenal success on the track, Flo-Jo also gained popularity because of her interest in fashion, designing asymmetrical track suits with the right leg fully covered to the ankle and the left cut off, and wearing six-inch fingernails painted red, white, blue, and gold. NBA fans might remember that she designed the Indiana Pacers’ uniforms, worn from 1990 through 1997.

According to producers, the biopic won’t just cover Griffith Joyner’s Olympics exploits but her life as well. In 1987, Flo-Jo was disappointed with her progress as a sprinter and went into semi-retirement, working at a bank and nail salon. During her comeback, she changed coaches and management, frustrated over a lack of sponsorship and endorsements.

After retiring from running, Flo-Jo established a foundation to help underprivileged children and co-chaired the President’s Council on Physical Fitness during Bill Clinton’s term. Unfortunately, Griffith Joyner’s story has a sad ending as well. She died when she was only 38 years old, suffering a severe epileptic seizure while she was sleeping.

The currently untitled Flo-Jo biopic is in very early stages with Haddish and Game1 currently looking for a writer to draft the screenplay. No director has yet been attached to the project.