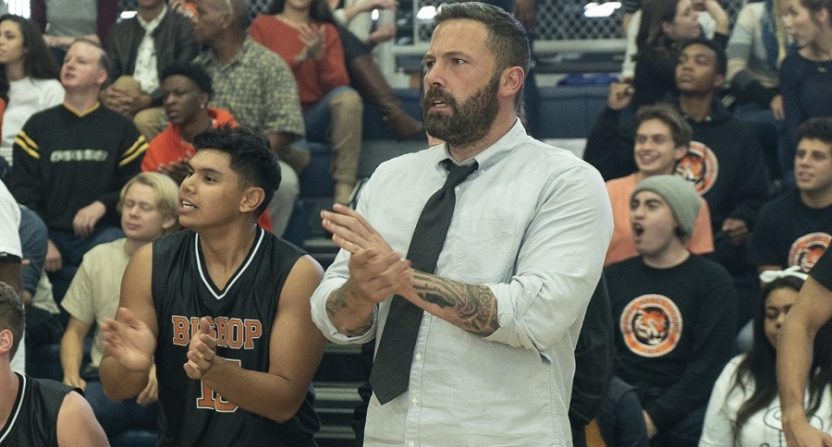 If you’ve seen trailers and commercials for Ben Affleck’s new film, The Way Back, you might think it looks like a typical sports movie. That would be the wrong assumption. What appears to be a rather conventional story about a man who’s lost everything finding redemption through coaching a high school basketball team doesn’t follow a predictable path, which makes it a pleasant surprise.

Yes, the premise for the movie is set up like many you’ve seen before. Jack Cunningham (Ben Affleck) faces a chance for redemption when he’s asked to coach his former high school team. He was the best player in school history, forever honored in trophy cases and with banners hanging in the home gymnasium. With a scholarship offer from Kansas, Cunningham was set to be a college star and maybe more.

But poor choices and self-destructive tendencies resulted in him squandering a potentially life-changing opportunity, and the consequences of those decisions hang over him as he approaches middle age. When we’re introduced to Cunningham, he’s a barely functioning alcoholic who can’t begin the day without having a beer in the shower or filling his thermos at his construction job with vodka. After work, he drinks at a local bar until someone has to carry him home. Or if he stays at home, Cunningham empties all the beer out of his refrigerator until he passes out.

Affleck’s own struggles with alcohol have been well-documented and it’s uncomfortable to consider how much of that experience he brings into his role. But when you see how easily he opens a beer can one-handed and gets to drinking, it’s difficult not to wonder how familiar he is with the routine. That might be why this is some of the best work he’s ever done.

Despite his downfall and heavy drinking apparently an open secret around town, Cunningham is offered the head coaching position at Bishop Hayes when the previous coach has a heart attack. Maybe the school’s principal, Father Devine (John Aylward), sees a path toward redemption for his former pupil. Or maybe he thinks a former star returning to coach a bad team can stir up some interest.

Cunningham initially doesn’t want the job, likely knowing that he’s in no position to lead young men or represent a school. It’s not entirely clear why he changes his mind, which is left to speculation. This is one example of how the story moves a bit fast at times. It’s one of the few weaknesses of the movie. But director Gavin O’Connor (Warrior, Miracle), who co-wrote the script with Brad Inglesby (Run All Night), get their point across and move things along rather than explain too much to the audience.

It’s actually sort of refreshing to have a director let viewers fill in some story points for themselves instead of spelling everything out. Maybe Cunningham doesn’t want to let down one person who believes in him, despite so much evidence to the contrary. Maybe he thinks being a coach at a prestigious school will help to reinvent himself and restore his reputation.

While that’s not clear, coaching a talented yet underachieving team awakens something in Cunningham. Maybe he sees a bit of himself in Brandon (Brandon Wilson), the star player who needs encouragement to show confidence in himself and realize a potential that shouldn’t be wasted. It could be that Cunningham sees that he can be more than an adult who just supervises on the sideline, but has experience and guidance to offer that can — and does — benefit his players.

Or maybe a guy who’s seemingly lost everything (and we eventually learn how those losses have fueled Cunningham’s downward spiral) has one place where the world makes sense for him, on a basketball court. Work hard, work together, do your job, and good things will happen.

But just when you think you know how this movie will turn out, The Way Back surprises by pushing the story a little further and exploring its main character a bit more deeply. Whether or not Bishop Hayes wins the big game isn’t as important as the team getting there. And Cunningham might have a happy ending, but he doesn’t get there in as straight-forward a fashion as he might in a different story.

Some viewers might prefer a more predictable, more conventional sports movie with an uplifting message. But O’Connor and Affleck know life isn’t that simple and a tidy resolution doesn’t often make for a good story. What feels more gratifying is that viewers can determine how this story ends. Maybe it goes exactly as you would’ve predicted. But maybe not. Being trusted as an audience to deal with the many possibilities at hand makes it worth seeing. This isn’t the movie you think it is.