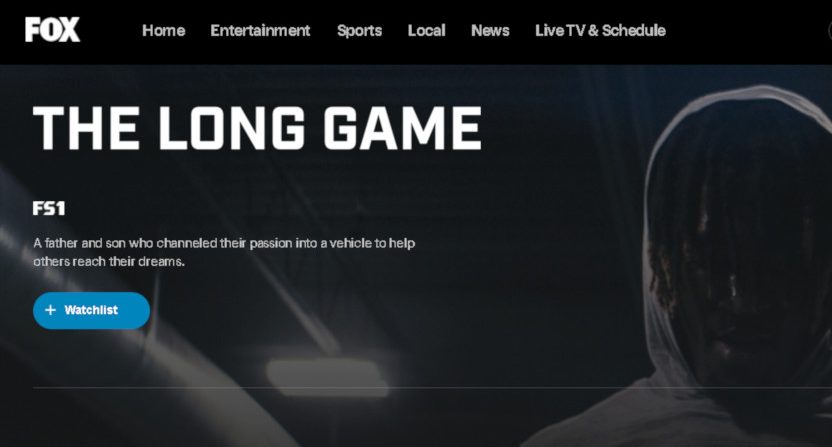 One of the most recent documentaries Fox Sports has premiered is The Long Game, which made its FS1 debut earlier this month and is airing there in rotation now; it’s also available through Fox’s website and app. The film covers the story of father-and-son duo Woodrow and Josh Grady and their work in 7-on-7 football in the Tampa area; Woodrow is a key founder of 7-on-7 there, while Josh played there, then played in college at Vanderbilt and Florida, and is now a NFL agent. Executive producer Josh Danziger recently spoke to AA by e-mail about the film, and said it was spawned by meeting Woodrow Grady in the context of a different project:

“I was in development on a different project centered around high school football, and flew to Tampa to meet the number-one recruit in the country, Byron Cowart, who now plays for the New England Patriots.  Coach Woodrow Grady’s name kept coming up while I was there, so I asked to be introduced. Our first meeting was at a gym and he made me do the same workout his players do. I’m pretty athletic but was wiped from a red-eye flight from LA to Tampa. It was grueling but i survived. He looked at me, said ‘You’re ok, kid’ and we started talking about his 7-on-7 team, Team Tampa and how his mentorship helps them navigate the complicated path to manhood, D-1 schools and eventually the NFL draft.”

Danziger said Josh Grady’s work as an agent, where he’s the youngest agent in the NFL, took the story further.

“That added yet another layer to the story that makes their parallel arcs relevant year after year, no matter the circumstances.  That relationship is relatable on every level and football provides a very engaging backdrop to storytelling.”

But it was Woodrow’s passion for helping kids through 7-on-7 that really stood out and convinced Danziger this was a good documentary to make.

“It was really Woodrow and his commitment to these kids and community.  Here is a self-made  man, who doesn’t ask anything from these kids in return for his help. He doesn’t do it for the money or recognition, he does it to help these boys become men and  make a better life for themselves and their family. After spending time with him these past few years, it really is all he wants.”

Here’s a trailer for the documentary:

As for making a documentary that heavily features 7-on-7 football, Danziger said that comes with some challenges in explaining the game to those who aren’t already familiar with it, but he felt The Long Game‘s team handled that well.

“Introducing 7-on-7 to a wide audience and explaining the importance of it in the wider world of college recruiting to those who might not understand in a limited amount of time was a little challenging. Our director Pete Karl and producer Connor Gordon did a great job of capturing the 7-on-7 moments in an easily understandable way that showcases these kids’ athleticism that plays such a huge role in their recruiting ratings.”

“It really did take a village to get this project to air. [Executive producer] Mike Hughes has a been a great partner on this. But also Pete Karl, Connor Gordon and the rest of our incredible crew putting their blood sweat and tears into this project was key in capturing these moments and telling this story. ”

This is one of many recent documentaries to explore sports at the high school level. Danziger said he thinks that level has great stories to tell.

“For me personally, my brother and some of my good friends are high school football coaches and I love going back to Texas and watching games on a Friday nights. I think there’s a lot of interesting stories to tell in the space. You are seeing an athlete’s journey at a pivotal time in their life. Especially with football and even basketball now, their ‘careers’ are starting earlier and earlier.”

“You have 17 and 18-year-olds being put in a position to make life altering decisions in the midst of all the other pressures of being a high school student. I remember Mack Brown saying when a kid commits to a college it isn’t in a four-year decision.. it’s a 40 year decision. Where you play college football determines not only your football career but also your academic one as well. And equally, an injury at 17 to a top recruiting pick can derail their entire future.”

Danziger said Fox was an excellent fit for this film, given their audience and how supportive they were on the storytelling side. He said they partnered with Fox through Hughes, who has done a lot of work with Fox over the years on everything from NFL, MLB and NASCAR broadcasts to The Best Damn Sports Show to Fox Sports Live to UFC and NASCAR documentaries.

“Fox and the Fox sports channels have already a built-in platform that we always thought would be a great place to showcase this documentary,” Danziger said. “And with Mike’s connection to Fox, he also thought it made sense as a great home for us to partner with them. And they really did give us the freedom to tell the story we always wanted to tell from the beginning.”

Danziger said they’re looking at expanding The Long Game into a docuseries, and they think there are more stories to tell here.

“We are in talks with several platforms about expanding this into a docuseries, in the same vein as Last Chance U.  In addition to buyers looking for turnkey ways to tell stories around high school football in places like Florida and Texas, Woodrow and Josh are always going to be immersed in storylines that speak to the human condition, which is a proven formula with sports-based docuseries that keeps audiences engaged.  ”