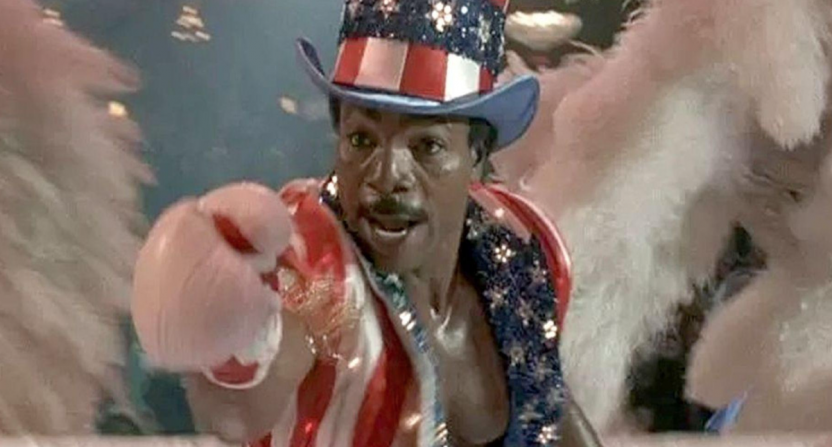 This past Thursday, fans of the Rocky movie franchise had an opportunity to see the director’s cut of Rocky IV for a special one-night theatrical showing by Fathom Events. Titled Rocky IV: Rocky vs. Drago, Sylvester Stallone recut his 1985 film significantly, working in 40 minutes of never-before-seen footage while eliminating some of the story’s goofier elements like the robot that Rocky bought for his brother-in-law, Paulie.

Among the scenes that have been changed or added is Apollo Creed’s fatal bout with Ivan Drago early in the film. In the original cut, the former heavyweight champion (played by Carl Weathers) has no chance against the unbeatable Russian boxing machine. But Stallone used previous footage to make the match more of a back-and-forth, to show Creed’s tenacity as a boxer, and perhaps hint at Drago’s vulnerabilities.

The filmmaker also expanded the funeral scene after Creed is killed in the ring by Drago to include a speech from Apollo’s trainer, Duke Evers (Tony Burton), something that wasn’t in the original theatrical cut. Rocky also gives a eulogy for his friend and former rival who gave a down-and-out fighter from Philadelphia a chance to become the heavyweight champion.

In addition to the director’s cut, Stallone released a behind-the-scenes documentary, The Making of Rocky vs. Drago. The doc shows the director and editor working during the COVID-19 pandemic to eliminate several scenes, change the pacing of others, and re-edit the fight between Rocky Balboa and Ivan Drago. Stallone has accumulated plenty of experience and reflection in the 35 years since Rocky IV hit theaters, something he mentions repeatedly as friend John Herzfeld records the process with an iPhone.

At one point, while Stallone looks at the footage of Creed fighting Drago and decides on the edits to make, he makes a surprising confession to Herzfeld. If he could go back 35 years and make Rocky IV over again, he would not have killed off the Apollo Creed character. You can see that at the 55:20 mark of the documentary above.

“It was foolish,” said Stallone. “I thought I needed that kind of springboard to propel the drama on this really great velocity moving forward. Him in a wheelchair, he would’ve assumed the role of Mickey. And now, his physicality has been diminished, we would’ve seen a different side of Apollo. He could’ve opened up all these other things that we didn’t even know about. He would’ve been kind of a father figure, brother, mentor.”

However, as Stallone and Herzfeld discuss, both 1990’s Rocky V or 2006’s Rocky Balboa would have been very different if Creed’s character had still been around as a mentor. It’s possible those films wouldn’t have even been made, though Stallone has found ways to revisit the character repeatedly over the past 30-plus years.

Perhaps more importantly, we might have been deprived of 2015’s Creed, a wonderful continuation of both the Apollo Creed and Rocky Balboa characters through the story of Apollo’s son, Adonis (Michael B. Jordan), attempting to follow his father’s legacy. Writer-director Ryan Coogler (Black Panther) paid tribute to one of his favorite movies and characters he loved, arguably providing a more poignant epilogue than Stallone could have done himself. (Stallone’s performance earned an Academy Award nomination for Best Supporting Actor.)

Related: ‘Creed’ lives up to Rocky’s legacy, while establishing its own birthright

Those who have seen the recut Rocky IV know that the film isn’t much longer than the original theatrical cut. Stallone didn’t just add those 40 minutes to what previously existed. He took that old footage and redid virtually the entire movie. As a result, the Rocky IV director’s cut has a 93-minute run time compared to the original’s 91 minutes.

Rocky IV: Rocky vs. Drago is now available for rental or purchase on digital video (including Amazon, iTunes, Google Play, and Vudu) and on-demand, allowing more fans to see Stallone’s new version of the film.

Related: ‘Creed III’ set for Thanksgiving 2022 release; Michael B. Jordan to direct and star in sequel