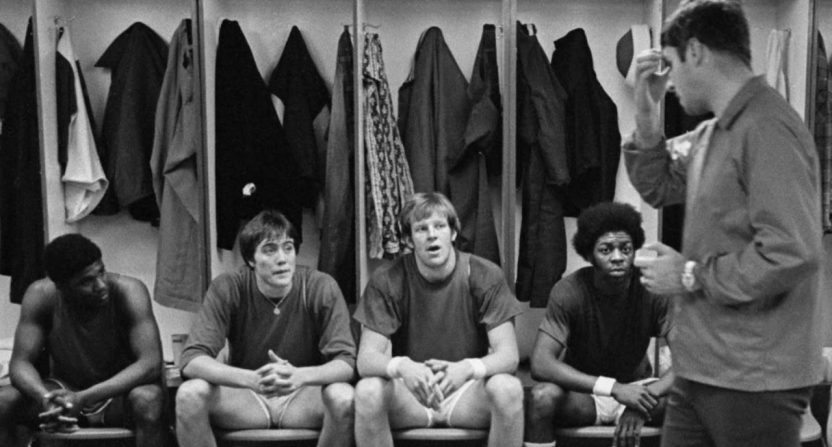 Showtime’s Perfect in ’76 (airing tonight at 9 PM Eastern) makes a case for that claim, although it doesn’t really take the time to offer anything more than cursory evidence. That’s a theme throughout the documentary, which clocks in at an hour but could have used another thirty minutes to flesh out the multiple storylines, while adding shades of depth and context to the wide cast of characters it introduces.

Of course, had it run longer, the film may have had to actually spend some time on the less-than-savory aspects of Bob Knight’s character, something Perfect in ’76 seemingly had no interest in doing. The first sign of that is Knight himself, who agreed to be interviewed and features heavily throughout. In the forty years or so since the Hoosiers became the last team to finish a perfect season, Knight’s been followed by well-documented controversy.

But you won’t get a hint of that in this film. Nor the allegations of player abuse, aside from one brief stretch, played for comedy, wherein Knight was photographed grabbing a fistful of a player’s jersey and yanking that player to the sideline while screaming at him.

Rather than drawing parallels to the later accusations of choking or other physical violence with his players, the story pivots to Knight’s fury that the Indianapolis Star ran those pictures on the front page, leading to Knight attempting to bully the paper on his own television show. (The Star‘s sports editor responded by printing Knight’s home telephone number.)

There’s also a quick mention of Larry Bird’s time with the program, and how he ended up heading back to French Lick rather than stay in Bloomington. Taking the film at face value, you’d think this was all due to Bird’s small town, impovershed upbringing; a classic farm boy who couldn’t handle the big campus lifestyle at IU. And while that may indeed have played a part, Knight himself played a role in Bird’s leaving the team. (In Seth Davis’s When March Went Mad Knight himself admits his failures, for example, with Bird.)

But the doc doesn’t have time to delve into those details. Or any details, really. Fun and interesting moments fly by, like the preseason matchup between the ’76 Hoosers and the Soviet Union Olympic team, with the controversial ’72 Olympic basketball final still fairly fresh in the minds of the players and Bob Knight, who mentions how he wanted revenge for Hank Iba.

But stories like that flash by all too quickly. Perfect in ’76 just attempts to cover too much ground in one hour, opening with the conditions in the program that led to Bob Knight’s arrival at Indiana, Knight’s first Final Four appearance in 1973, and the team’s one-loss 1975 campaign.

As any Indiana fan around in the ’70s will tell you, the Hoosiers likely would have gone undefeated for two consecutive years had Scott May not broken his arm. This documentary tells you that too, and aside from some footage of May attempting to play through a broken arm by wearing a giant cast, the film isn’t giving you much more information than you’d get talking to my dad for an hour.

The season itself feels glossed over, occupying about only about half of the running time. There are a few crucial games where only a last second tip-in saved the perfect season; one would assume these would be focused on, but instead we get one quick highlight after another, with very little in the way of actual break downs or contextualized game action.

It’s a surface-level look back, and though it’s fun to get to hear from people in and around the team at the time (Hoosier broadcaster Don Fischer sounds exactly the same forty years ago as he does today, based on the archival audio heard throughout) it’s hard to imagine the story being broad enough to capture a casual audience.

Unfortunately it it’s also not deep enough to offer much to college basketball fans. It occupies a sports documentary no-man’s land.

Knight’s participation probably precluded any real critical look at the program and the man himself. It ends with a sparsely-attended reunion of sorts for coach and players, in a sad-looking bar. This is somehow meant as a crowd-pleasing coda, which is incongruous given all we know about Bob Knight, much less what we’re seeing on the screen.

Maybe someone else will make one someday.