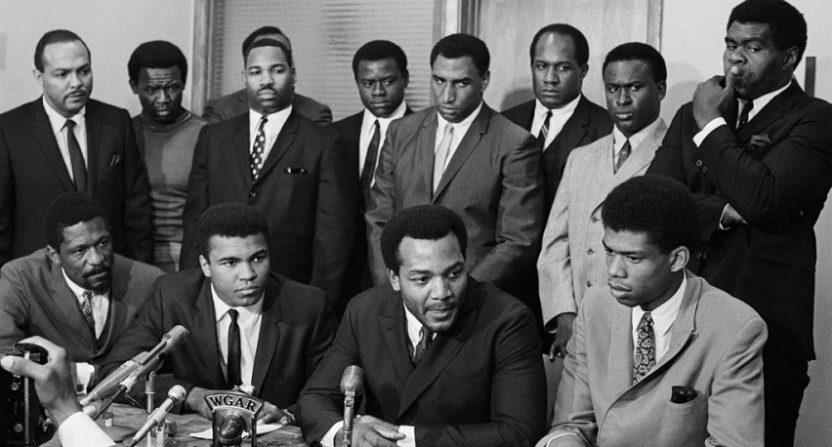 Muhammad Ali had such a rich, compelling life and career that it’s impossible to chronicle everything that he experienced during his 27 years in boxing (21 of them as a professional) and 74 years on this planet. Trying to distill Ali to a couple of hours of documentary or feature film simply cannot be done.

As a result, Ali’s life is practically an industry unto itself with so many stories that can be depicted and examined individually, often warranting the sort of deeper analysis seen in a book, documentary or focused biopic. One such event in Ali’s life that will be getting such treatment is Ali’s conscientious objection to the Vietnam War in 1967 based on his religious beliefs and refusal to serve in the military.

Shortly after Ali’s decision, 12 of the top black athletes and academics in the country gathered in Cleveland, Ohio to discuss the boxer’s reasoning behind his refusal to go into the draft and eventually show support for his conscientious objection. Among the athletes who participated in the summit were Jim Brown, Bill Russell, Kareem Abdul-Jabbar (then Lew Alcindor), Willie Davis and Bobby Mitchell.

The meeting in Cleveland will be the subject of an upcoming limited dramatic series for Showtime, titled The Ali Summit. According to The Hollywood Reporter‘s Kate Stanhope, the series’ primary theme will focus on the intersection between athletics and civil rights, something that continues to resonate to this day. The story will follow the FBI’s campaign against Ali, which extended to other prominent black figures such as Jim Brown once they expressed their support of Ali, in addition to the civil rights struggle occurring in the country at the time.

The Ali Summit has some familiar and impressive names behind it, notably Jeff and Michael Zimbalist, who directed The Two Escobars and Youngstown Boys, two of the better 30 for 30 documentaries for ESPN, as well as the 30 for 30 short, Arnold’s Blueprint. For their most recent project, the Zimbalists moved into dramatic adaptation with Pele: Birth of a Legend, a biopic which focused on the early years of the soccer legend’s life. The pair will stay in the dramatic space for this Showtime miniseries as writers and directors. Jim Brown will be an executive producer on the series, joining Jeff Kirschenbaum (xXx: Return of Xander Cage) and Joe Roth (FX’s Legion).

No word on when the series will begin production or filming, or if it will make it to air this year, which marks the 50th anniversary of the summit. No casting news has been announced either at this early stage of development. That could be something we have fun with in the weeks to come. Who should be cast as Muhammad Ali, Jim Brown, Bill Russell and Lew Alcindor?