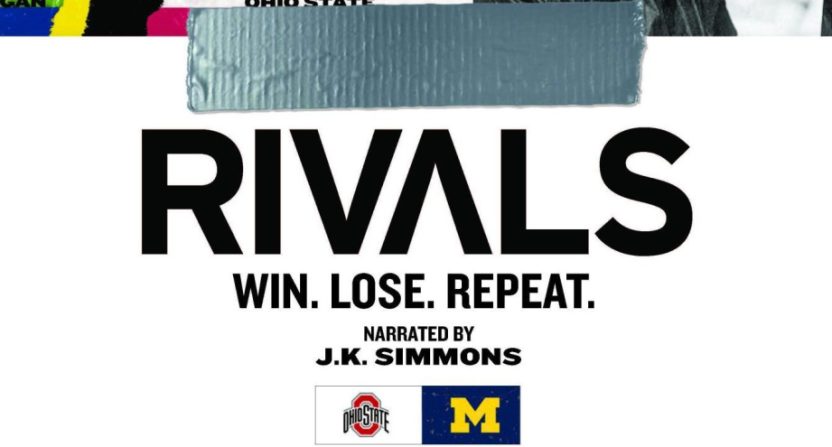 Doing a documentary on college football’s most famous rivalry is daunting. Not only due to the scope of the subject matter but also because so many of the stories are already known. Even people who are not immersed in this annual grudge match are aware of the significance of this time of year.

RIVALS: Ohio State vs. Michigan takes a fun, fresh look at the feud. This film is a production of Sinclair and Tennis Channel Studios and is the network’s first documentary for a sport other than tennis. It has already been airing on Sinclair’s Bally Sports RSNs, and premieres nationally on Tennis Channel Sunday at 7 p.m. Eastern, with further notable airings on Big Ten Network Wednesday at 11 p.m. Eastern and Thursday at 8 p.m. Eastern.

There is much history to cover in this Big Ten border war. When Ohio State and Michigan meet Saturday, it will be for the 118th time.

The Game has national championship implications almost every year. It will again Saturday, with Ohio State (11-0) and Michigan (11-0) currently No.2 and No.3 respectively in the College Football Playoff rankings.

Stories about past clashes are told and retold. Some true. Some exaggerated. Some sheer myth. It’s difficult to find a new way to put this showdown in proper perspective. Kudos to RIVALS for giving sports fans an enjoyable watch.

Director and writer Peter Karl doesn’t just assemble clips of talking heads (coaches and players) reliving their glory days. Too predictable. Instead, RIVALS digs deeper to unearth the science behind it all. To accomplish this, he introduces experts to talk about what a rivalry says about those who celebrate one team’s accomplishments while also reveling in another’s misfortune.

No sport embraces tribalism like college football. It’s the foundation of a multi-billion dollar empire. That us-vs.-them mentality spans the country and spans generations, particularly for the Big Ten and Southeastern Conference. There’s a reason why those two are the most financially successful NCAA leagues. People care. A lot. But why do they care so much? RIVALS attempts to answer the questions of what it means to choose sides by cheering for the Scarlet and Gray while booing the Maize and Blue.

Or vice versa, if you prefer.

To get to the heart of the matter, RIVALS features two prominent voices through the documentary: Emmy-nominated sportscaster Rich Eisen and Academy Award-winning actor J.K. Simmons. Eisen is a Michigan alum and diehard Wolverines fan. Simmons was born in Michigan but grew up in Ohio as a diehard Buckeyes fan.

The documentary opens with Eisen acknowledging his somewhat dysfunctional relationship with his alma mater by saying: “Michigan football affects my mood in a way that is unhealthy.” Cue Simmons, who serves as RIVALS‘ narrator, saying: “there’s something about a sports rivalry that makes humans go haywire. They bring out our best, or our worst.”

To understand why that is so, this documentary features some of the findings from the Know Rivalry project. Its mission is to better understand rivalries by using scientific methods to measure sports fans’ feelings and behaviors. Don’t worry. RIVALS doesn’t bury its audience under a pile of cold data. Through animation, lively banter, and fascinating details, viewers will get a greater appreciation of what Ohio State vs. Michigan means for those who care about it the most.

The epic games (such as the 1973 10-10 tie and the 2006 42-39 shootout won by Ohio State), the legendary coaches (such as Woody Hayes and Bo Schembechler), and Heisman Trophy winners (such as Archie Griffin and Desmond Howard) are all part of sports lore.

One of RIVALS‘ executive producers is Jon Wertheim. The Sports Illustrated executive editor and senior writer grew up in the heart of Big Ten country (Bloomington, Ind., the home of Indiana University). A storyteller like Wertheim knows that some conflicts have great value.