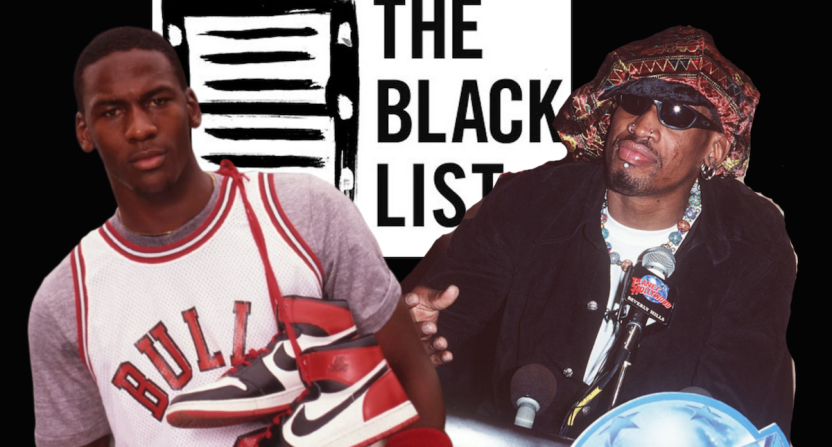 Since 2005, film executive Franklin Leonard has released The Black List, which annually highlights the unproduced screenplays currently circulating around Hollywood that producers and executives like the most. And usually, some sports-themed projects are among the promising scripts that haven’t yet been made. This year’s crop is no exception.

Some highly acclaimed films have resulted from these previously unproduced scripts getting attention. Black List scripts that were eventually made include Academy Award Best Picture winners Slumdog Millionaire, Argo, The King’s Speech, and Spotlight.

The 2021 edition of The Black List was announced on Monday during a live-stream hosted by Black Lady Sketch Show‘s Ashley Nicole Black and Gabrielle Dennis. Among this year’s picks were movie scripts about Kanye West, Donald Trump, and director Michael Bay, and a drama imagining Mickey Rourke on The Masked Singer.

But since we love to highlight sports movies here at Awful Announcing, a few of the scripts on this year’s Black List caught our eye. (You can read the complete 2021 list here.) First among them is Air Jordan, written by Alex Convery. The one-sentence synopsis of the script is as follows:

“The wild true story of how an upstart shoe company named Nike landed the most influential endorsement in sports history: Michael Jordan.”

Convery was also on last year’s Black List for Excelsior!, a script about the early days of Marvel Comics, Stan Lee, and Jack Kirby.

Jordan’s former teammate Dennis Rodman is the focus of another screenplay on the Black List, one we’ve written about previously. Dennis Rodman’s 48 Hours in Vegas follows the controversial star’s trip to Las Vegas before Game 6 of the 1998 NBA Finals. The synopsis:

“Before Game 6 of the NBA Finals, Dennis Rodman tells Phil Jackson he needs 48 hours in Vegas. What follows is a surreal adventure with his skittish assistant GM that involves a bull rodeo, parachuting out of a Ferrari and building a friendship that neither one of them ever thought was possible but will end up solving both of their problems.”

Another sports-themed script received the most mentions among the Hollywood executives. Cauliflower, written by Daniel Jackson, chronicles a high school wrestler pursuing a state championship while struggling with a bizarre infection in his ear that helps him on the mat yet threatens to drive him insane.

Ultra, written by Colin Bannon, tells the story of an ultramarathoner selected for a secret race touted as “the hardest race on Earth.”

Challengers, written by Justin Kuritzkes, takes place at a low-level professional tennis tournament and three players (one of them a former Grand Slam winner) whose old rivalries are revived by the competition.

The entire 2021 Black List is worth checking out. Not all of these scripts will be produced into feature films, but some will and this might be the first you hear of them. Others are just fun to imagine as potential films on the big screen. And a few just seem too outlandish to ever be made, but it’s great that someone cared enough about such stories to write a script and hope for the best.