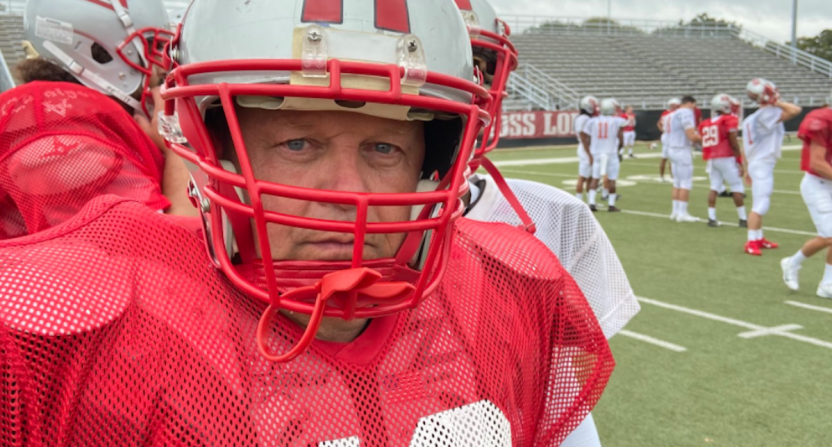 Upon hearing the story of the upcoming football movie The Senior, some might think of 1991’s Unnecessary Roughness. In that wacky comedy, Scott Bakula played a 34-year-old quarterback who goes to college and a Texas State football program starting over after massive NCAA sanctions.

But The Senior is based on the true story of Mike Flynt, who was kicked off the 1971 Sul Ross State football team as a senior for getting into a fight with a freshman teammate (one of many fights he got into during his college years). At a reunion of the team, Flynt said losing his senior year was the greatest regret of his life. His former roommate encouraged him to go back and try out for the team — at the age of 59.

Michael Chiklis (The Shield) will play Flynt, who found out that he had a remaining year of eligibility to play his lost senior season. He also pursued the degree that he was six hours short of completing when he left Sul Ross State (located in Alpine, Texas). As a junior, Flynt was a team captain, an All-Conference linebacker, and the defense’s leading tackler.

As could be expected, Flynt has to overcome what appears to be a ridiculous endeavor, winning the respect of his far younger teammates. (He was eight years older than his coach, and two of his children were older than anyone on the team.)

But Flynt was in outstanding shape, probably better than most of the players, as a career strength and conditioning coach. He was a strength coach at Nebraska, Oregon, and Texas A&M, and also created the Powerbase line of fitness and training equipment.

Shooting on THE SENIOR has started in Fort Worth, Texas. ⁦@MichaelChiklis⁩ is already the boss of bosses – a great actor with a crazy wonderful work ethic. pic.twitter.com/GNBgC0rf5w

Chiklis leads a cast that just added Mary Stuart Masterson (Blindspot) as his wife, Eileen, and Rob Corddry (The Unicorn) as the Sul Ross football coach. The film is being directed by Rod Lurie (The Outpost), from a script written by Robert Eisele (3: The Dale Earnhardt Story). Wayfarer Studios (Clouds, Five Feet Apart) is financing the project.

The Senior just began filming in Texas with Lurie and Chiklis posting photos on Twitter from the production.

Trainer working on my back. Awestricken by Mike Flynt. He went back & played college football at 59! Linebacker yet! He & @TomBrady are cut from the same cloth. What an inspirational story! #TheSeniorMovie
Oh and that's a birthmark on the back of my head. (Make it into a tat?) pic.twitter.com/pJ0m2oakJA

greetings from ⁦@MichaelChiklis⁩ and the Sul Ross Lobos on the Texas set of THE SENIOR pic.twitter.com/PLscusMHYi

“We are thrilled to be able to bring Mike Flynt’s incredible true story to the big screen. He is the Rudy of the boomer generation and has proven that it’s never too late to chase one’s dreams,” Wayfarer Studios co-founder Justin Baldoni told Deadline when The Senior was announced last month.

“I’ve been a fan of Michael Chiklis for years and he is perfect for this role; he’s devoted immense time to study and train to embody Flynt. Michael’s determination and drive paired with Flynt’s real-life journey and Rod Lurie’s masterful direction will bring this much needed and extremely timely story to the screen.”

You can read more on Flynt’s incredible story at Sports Illustrated, Texas Monthly, and the Los Angeles Times.