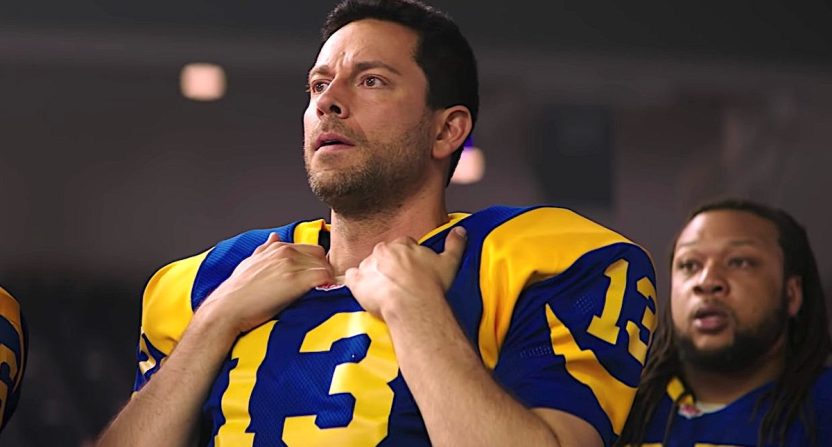 Kurt Warner is one of the most unlikely success stories in American sports. An unknown undrafted small-college quarterback goes from stocking supermarket shelves to NFL Most Valuable Player and Super Bowl champion in his first season as a starter.

American Underdog: The Kurt Warner Story is based on Warner’s book All Things Possible, and Warner and his wife Brenda are credited as executive producers. The desire of athletes to control the narrative when it comes to the telling of their own stories is completely understandable.

We’ve seen that most prominently in The Last Dance, the ESPN/Netflix documentary about the Chicago Bulls of the 1990s. Sure, it was entertaining, but it was also a Michael Jordan infomercial. Still, a documentary still must follow some framework of journalism.

Since American Underdog is a based-on-a-true story film, that allows wiggle room. In Warner’s interpretation of his story, he’s intent on presenting a message of belief in yourself and positivity. American Underdog is produced by the Kingdom Story Company, a studio that specializes in faith-based features.

But a successful film isn’t necessarily about delivering a message. It should be about presenting an idea and allowing the audience to figure out the meaning for themselves.

American Underdog pushes the narrative that you can overcome obstacles to achieve success through determination and faith. Warner believes this. But there was also considerable randomness that contributed to the Kurt Warner story. Warner was on the right team with the right players and only got his chance to play due to a preseason injury to Trent Green.

He made the most of an unexpected opportunity. That’s what made the true story so appealing. If Green doesn’t get hurt, do we even know Kurt Warner’s name? Do the St. Louis Rams still win the Super Bowl? We could go down a rabbit hole of possibilities, ad infinitum.

Even if we accept Warner’s interpretation of his unlikely journey, this is not a compelling film. What we get with American Underdog is a bland story that doesn’t inspire. It’s a sports movie with not enough sports in it. You’ll be shocked at how flatly the movie ends.

There’s no crescendo of emotion. No stirring locker room speech. You get highlight clips from the actual Super Bowl. You get a written on-screen summary about Warner’s career. Credits roll. Yep. That’s it. If ever a sports movie demanded a Hollywood ending, this would be it since there actually was a Hollywood ending.

More time is devoted to Kurt and Brenda’s relationship than football. And that’s fine if you’re not expecting to learn much about Warner the quarterback.

Warner and Brenda are played by capable actors in Zachary Levi (so good in Shazam!) and Anna Paquin (Academy Award winner for Best Supporting Actress in The Piano). They are the best thing about the film. Levi and Paquin have believable chemistry. So much so that you might overlook the fact that Levi is a 41-year-old man portraying a college student. The movie makes no attempt to make Levi appear younger. He looks the same from start to finish.

We see the Warners and their young family struggle to make ends meet, struggle with a long-distance relationship, and struggle with Mother Nature. Still, Levi and Paquin are let down by a script that doesn’t work hard enough to fill out their characters or their supporting cast. Charm can only go so far with dialogue this bad. Kurt Warner’s college coach and teammates are forgettable. And the story doesn’t really kick in until Warner goes from the Arena League to finally getting a legit shot with the Rams.

Enter Rams coach Dick Vermeil (played by Dennis Quaid) and offensive coordinator Mike Martz (Chance Kelly). Quaid makes for a passable Vermeil. In real life, Vermeil is a highly emotional go-by-your-guts type of guy. Quaid’s performance reflects that. However, again, he’s let down by the script. Vermeil is famous for his crying. How can you not have a scene with him weeping?

As for Martz, he is portrayed as a jerk who openly doubts Warner. But at least according to this story, it was Martz who convinced Vermeil to stick with Warner after Green got hurt. Also, the movie leads the audience to believe that Warner joined St. Louis in 1999. He was with the team in 1998 as a third-stringer. He even appeared in one game.

The most amount of football we see is Warner’s first start against the Baltimore Ravens. It’s decent stuff, showing Warner overcoming being picked off for interception by Ray Lewis. The Rams won 27-10, en route to their magical 13-3 season.

The tackle that won the @RamsNFL Super Bowl XXXIV ?

You’d expect the film to be building towards a climax as dramatic as Super Bowl XXXIV. The Rams beat the Tennessee Titans, thanks to a 73-yard fourth-quarter touchdown pass from Warner to Isaac Bruce and a tackle of Titans wide receiver Kevin Dyson at the 1-yard line as time expired for a 23-16 victory.

But for some reason, the movie about a quarterback who went on to a Hall of Fame career throws in a few clips and barely includes any original material about Super Bowl XXXIV.