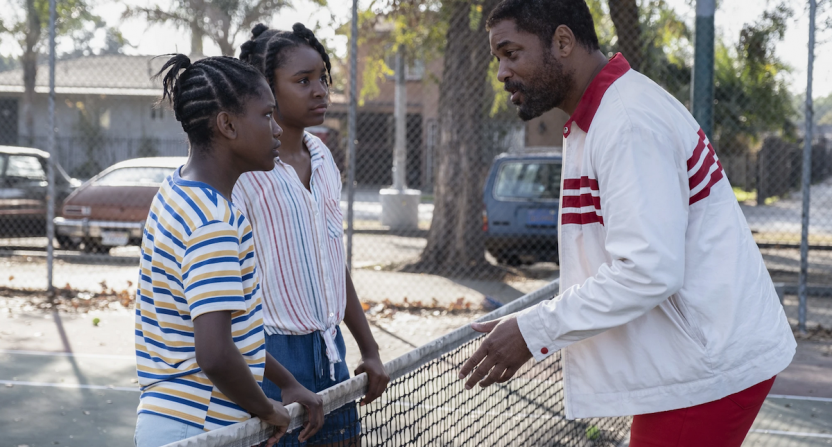 King Richard is a somewhat unusual sports movie, which makes it worth your time. The true stars of the story are supporting characters until emerging at the end. And the main character dominates the film until eventually fading into the background once his work is done.

Yes, the story hits some familiar notes and follows a predictable path. How could it not when most viewers will know that Venus and Serena Williams eventually became two of the greatest tennis players in the world, two of the best in the sport’s history?

But how the two sisters reached those heights is a compelling journey to follow, one that broke many of the rules set in place by a hierarchy and conventional practices that claims to turn young women and men into tennis stars, yet ignores their needs as people and neglects to guide them toward fulfilling normal lives.

Those only familiar with Richard Williams from his brash statements in interviews and showy behavior in the stands at tennis tournaments might think of him as the worst kind of sports parent. But King Richard quickly demonstrates that Williams isn’t living his dreams through his daughters. He’s protecting his children from the abject racism and trauma of his upbringing. He’s fighting a system designed to keep people who don’t live in privilege from a fair opportunity.

Being a tennis revolutionary doesn’t make Williams a likable figure. So it certainly helps to have an actor as engaging as Will Smith portray him. Williams’ behavior is often difficult to support, such as when he scoffs at an agent who wants to represent Venus when she emerges as a junior tennis star. As much as Smith might try to become Richard Williams, his signature charm and humor still peek through.

Smith helps us understand where Williams is coming from. He appears to literally carry the weight of the oppression and suffering he’s experienced on his shoulders. He’s been beaten down — literally, as we see during the film — and gets up because he believes so strongly in what he’s doing, what he sees as his greater purpose.

As Williams repeatedly faces resistance from tennis coaches and club presidents, his face goes blank in denial and defiance. He’s heard the same excuses before. He keeps encountering the same refusal to belief, even when he’s put in the work of building an 85-page plan and videotapes of their practices to show that he’s not just looking for a handout.

But because it’s Will Smith on screen, we can’t help but root for the guy and laugh when he frustrates acclaimed coaches like Rick Macci (Jon Bernthal and his mustache, in maybe the movie’s most amusing performance) by insisting Venus and Serena be more than teenage tennis robots.

Yet King Richard isn’t just an acting showcase for Will Smith, with everyone on screen merely serving to provide scenery as he plays a role that could generate Academy Award consideration for him. The movie’s standout performance may be from Aunjanue Ellis (Lovecraft Country) as Venus and Serena’s mother, Oracene Price.

Oracene is not just a stand-by-your-man wife going along with her husband’s unusual, possibly irrational life plan. She’s an equal partner doing far more work than providing income. We see her coaching Serena hard as Venus begins to draw attention and resources from coaches Richard is recruiting. And when Oracene doesn’t feel her husband is acknowledging those contributions, nor giving their daughters a voice in their future, she speaks out in one of the movie’s best scenes.

The movie also wouldn’t be as effective if the actors playing Venus and Serena weren’t compelling as well. Saniyya Sidney’s performance as Venus reminds us that this is a 14-year-0ld girl enjoying the childhood that Richard is fiercely protecting. Yet she’s also a fierce competitor yearning to fulfill her father’s ambitions and the talent that can make her one of the best players in the world. When the story needs her to take over, she carries the film to its touching finish.

And though it’s a smaller role, Demi Singleton as Serena makes an impression when she’s on screen. The sisters are close, but Serena is in danger of being ignored while Venus draws the attention of coaches and sponsors during her ascent.

In this way, King Richard works as sort of a prequel. We know that Serena will eventually become one of the best tennis players ever. Yet she doesn’t just wait her turn either, sneaking into competitions and learning from her sister’s experiences. When Richard tells Serena how great she’ll be, we appreciate his vision.

Of course, it’s crucial for a sports movie to create believable action on the field or court. Maybe tennis diehards will disagree, but director Reinaldo Marcus Green (Joe Bell) makes Venus’s matches look authentic on screen, even if he tends to stay in close-up for many of those scenes and focuses on serves. Yet when he needs to, notably for the climactic match between Venus and Arantxa Sánchez Vicario, Green shows the relentless back-and-forth battle.

Most importantly, Bell, cinematographer Robert Elswit, and writer Zach Baylin show the contrast between the world that the Williams family live in and the one they aspire to join. They also build their movie around a man who whose story warrants the big-screen treatment.

Some might wonder why Richard Williams is the focus of this film, rather than Venus and Serena. Yet the sisters being executive producers indicate how they view their father’s role in their success. And despite their involvement, the story appears to be fair, telling the important parts and not shying away from the difficult moments.

King Richard is now showing in theaters and is also streaming on HBO Max until Dec. 19.