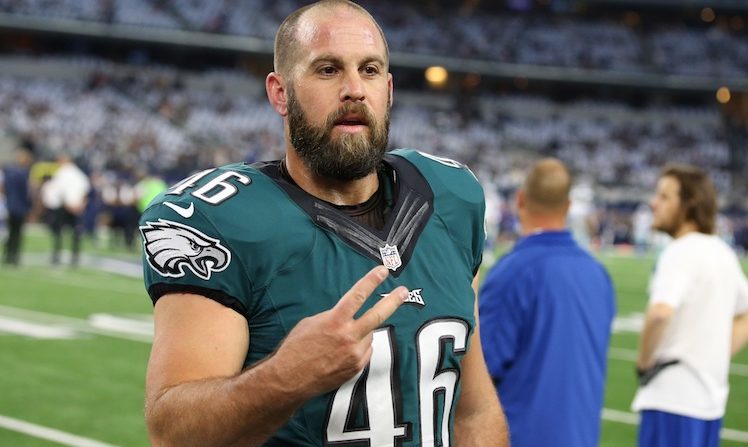 Former NFL long snapper Jon Dorenbos was traded by the Philadelphia Eagles before the team won the Super Bowl. More importantly, he had to retire at the age of 37after a physical revealed an aortic anerysm that required open-heart surgery.

However, Eagles owner Jeffrey Lurie said Dorenbos, who played for the Eagles for 11 seasons, will get a Super Bowl ring from the team. And his life story is being developed for a feature film by acclaimed producer Mike Tollin.

As first reported by Deadline’s Mike Fleming Jr., Tollin bought the rights to Dorenbo’s upcoming book, Life is Magic, and is in the process of finding a screenwriter to adapt the book into a screenplay. The film will be financed and produced through Tollin’s production company Mandalay Sports Media and IMG, who previously formed a partnership to produce several sports-themed films.

The title of Dorenbos’s book partly references his interest in magic, skills that led to a third-place finish on NBC’s America’s Got Talent and impressed then-ESPN NFL analyst Jon Gruden. But it surely also alludes to the life Dorenbos was able to make for himself despite having to deal with horrible tragedy at an early age.

When he was just 12 years old, Dorenbos’s mother was murdered by his father. Dorenbos was sent to a foster home, but eventually adopted by his aunt and uncle. A kid who dealt with far more than anyone should have to at such an age learned magic to help cope with his difficulties.

Mike Tollin should be a familiar name to those who enjoy sports documentaries and feature films. He was an executive producer on virtually every one of the original 30 for 30 films for ESPN, and directed Small Potatoes: Who Killed the USFL? He has also executive-produced numerous other documentary projects, such as HBO’s Kareem Abdul-Jabbar film, Showtime’s The Franchise and NFL Network’s Undrafted. Additionally, Tollin has produced several scripted TV shows, including Smallville, One Tree Hill and ESPN’s The Bronx is Burning.

Most recently, Tollin directed another documentary for ESPN, Morningside 5, a passion project 25 years in the making.

Tollin is a Philadelphia native and huge fan of the city’s sports teams (he directed a 30 for 30 short about former Eagles owner Leonard Tose), and struck up a friendship with Dorenbos in recent years. Following his third-place finish on America’s Got Talent, many producers approached Dorenbos for his story, but his relationship with Tollin made that an easy choice. According to Deadline, Dorenbos sold the option on his book to Tollin for one dollar.