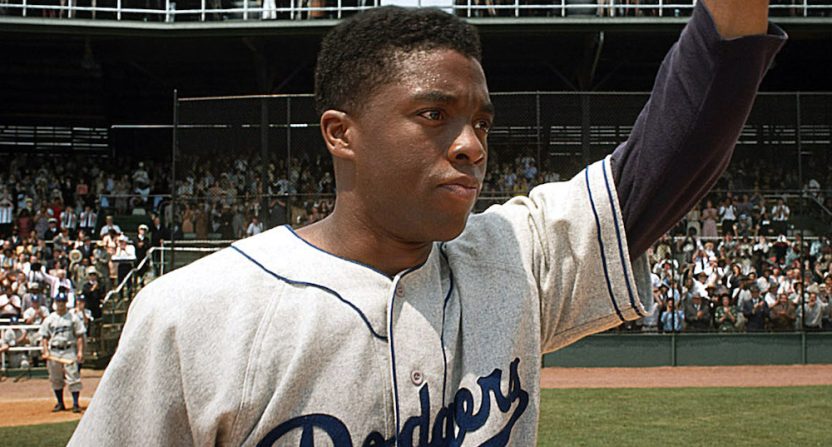 If you’ve never seen the Jackie Robinson biopic, 42, or didn’t watch it on a big theater screen when the movie was released in 2013, you may have another chance to do so this week and through Labor Day weekend.

In tribute to actor Chadwick Boseman, who passed away last Friday, 42 will be re-released on Thursday (Sept. 3) at more than 740 locations throughout the country. According to Variety, AMC Theaters, Regal Cinemas, Cinemark are among the major theater chains that will show the film, in addition to many independent exhibitors including Alamo Drafthouse.

Portraying the baseball icon, who became the first Black athlete to play in the major leagues, was the first headline role for Boseman, who struggled with colon cancer for four years before his death. He was only 43 years old.

Boseman showed he was a potential star whose career was worth following after his performance as Robinson. His portrayal showed how complicated a man Robinson was, showing intensity and fierce stoicism in the face of racism while also demonstrating the emotional toll that constant cruelty took on him.

Sports movie fans might also remember Boseman for his roles in The Express and Draft Day. He went on to play other significant historical figures such as James Brown and Thurgood Marshall. Boseman eventually achieved international superstardom as King T’Challa in Marvel’s Black Panther.

Related: Chadwick Boseman made a major cultural impact in far too short a time with portrayals of Jackie Robinson, Black Panther

Related: Spike Lee’s Jackie Robinson film would have been a major downer, aiming to tell the icon’s complete story

Tickets for showings of 42 at AMC Theaters will be $5.00 and went on sale Tuesday. The chain began reopening theaters on Aug. 20 and plans to have 600 locations open by Sept. 3 (for the release of Christopher Nolan’s Tenet). Cinemark intends to have all of its locations open by the same date. Regal began a slow reopening of its theaters on Aug. 21. However, state and local COVID-19 regulations may affect which theaters can reopen.

Will audiences be comfortable with going to movie theaters under COVID-19 concerns? (Warner Brothers is certainly betting on it, between releasing Tenet and reshowing 42.) Theater chains insist that proper sanitization measures and distancing protocols will be in place as they reopen.

Viewers can also watch 42 at home via on-demand streaming. The film is available on Amazon Prime, iTunes, YouTube, and Google Play. If you’re willing to go out to a theater, however, 42 is worth a look on the big screen.