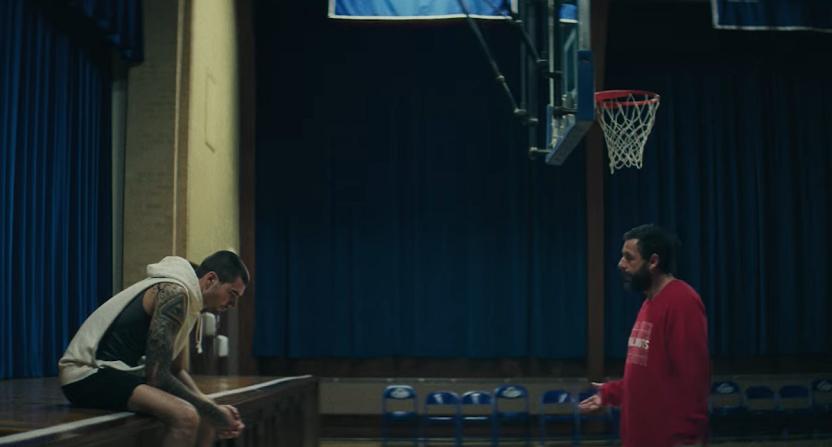 Hustle makes you wonder about Adam Sandler. There’s no one quite like him in entertainment. His roots are in comedies, and he has made millions making many bad ones.

Just earlier this year, Sandler’s production company Happy Madison released Home Team, a contender for worst movie of 2022. There’s also no denying that Sandler is capable of winning us over with dramatic performances, such as the surprising Uncut Gems.

He’s always had the talent. Cue up Punch-Drunk Love, the 2002 Paul Thomas Anderson film. We’ve seen what Sandler can do when he tones down the shtick and throws himself into a role. In Hustle, like Uncut Gems, he returns to familiar territory by focusing on his love for sports. This time, he plays Philadelphia 76ers international scout Stanley Sugarman.

There’s little original here in a plot that feels as comfortable and familiar as your favorite shoes. But you don’t have to create something new to make a good movie. You just have to give the audience characters to care about and a story worth paying attention to. Everyone loves an underdog. Sandler knows that, and he knows how to play one.

Being a scout is not glamorous. You’re on the road constantly, sleeping in hotel rooms so often that you might forget what city you’re in when you wake up. You’re talking to a lot of people with agendas. You have to see through the bullshit and make thorough assessments of young men who haven’t reached their potential yet. That’s a challenging life, especially if you have a family to support.

Sandler’s Sugarman has a Willy Loman quality to him. A grizzled veteran who believes in hard work and is also desperate. There’s a poignant moment when Stanley says, “Guys in their 50s don’t have dreams. They have nightmares and eczema.”

Then one day in Spain, Sugarman’s dream comes true in the form of Bo Cruz, who’s played by real-life 6-foot-9 NBA player Juancho Hernangómez. An aging scout finding a previously undiscovered phenom is something we’ve seen before in countless movies. But Stanley and Bo are well-rounded enough characters to make it worth your time. They show us how it feels to be in the ultra-competitive ecosystem of big-league sports.

From the outside, there’s a perception that working in sports is like being employed in a toy store. It’s not all fun and games. It’s foremost a job. There are successes and joy, but there can also be failures, grumblings, burnout, and a sense of being overworked and underappreciated. Sometimes the only difference between your job and a sports job is that your problems play out in private as opposed to the very public nature of sports.

Hustle tells the tale of one man putting his trust in another. Stan believes in Bo when Bo doesn’t believe in himself. Even when things go wrong. The mentor-protégé chemistry between the actors feels authentic, and that goes a long way in selling the story.

So does having LeBron James as one of the producers. His influence is clear as this film is filled with several current and former NBA players and other basketball luminaries. James doesn’t make an appearance, but you will see guys like Anthony Edwards, Boban Marjanovic, Kyle Lowry, Khris Middleton, Luka Dončić, Trae Young, Moe Wagner, Kenny Smith, Julius Erving, Dirk Nowitzki, Allen Iverson, Shaquille O’Neal, Charles Barkley, etc.

The biggest revelation might be Edwards. He’s cast as Cruz’s trash-talking nemesis Kermit Wilts. While he doesn’t have a lot of screentime, Edwards strikes the right combination of menace and arrogance (in real life, Hernangómez and Edwards are friends and were teammates on the Minnesota Timberwolves.).

Adam Sandler talking about the bond between Anthony Edwards and Juancho Hernangomez during “Hustle.”

If you’re going to nitpick, you could point out that in reality, an NBA scout wouldn’t do some of the things that Stan does for Bo, such as getting him a phone, setting up workouts, and paying for food and lodging. An agent would handle that stuff. And the idea that a 6’9″, 22-year-old with those skills would be a complete unknown —even overseas — is ridiculous.

Those are minor criticisms. Overall, Hustle is enjoyable and will make you wish Sandler created more of these types of well-crafted films instead of the ones where he doesn’t seem to care.