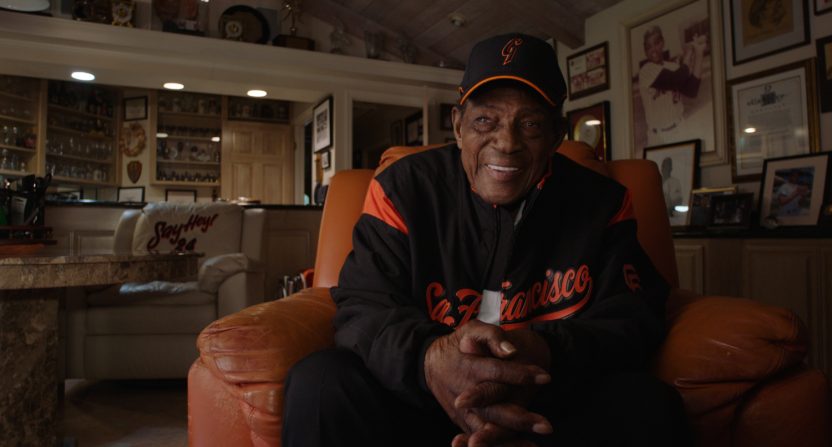 ‘Five-tool player’ is one of the loftiest compliments you can give a baseball player. It refers to someone who can hit for average, hit for power, run, field, and throw—all at an exceptional level. Those guys are extremely rare. In today’s game, probably only three would make that list: Mookie Betts, Mike Trout, and Julio Rodríguez.

Willie Mays was the first player to be described as such, and you could argue that he remains the greatest five-tool player of all time. Mays is 91 now, and generations of fans weren’t alive when he dominated the sport. The HBO documentary Say Hey, Willie Mays! looks at a star who rose to fame in a changing America. The film is directed by Nelson George, with actor Colin Hanks credited as a producer and LeBron James as an executive producer.

If Mays (seen above in an interview for the film) isn’t the greatest living baseball player, then it’s his godson Barry Bonds. Each is featured in this 98-minute film. In many ways, you can’t talk about one without the other. Both were misunderstood athletic geniuses, and the San Francisco Giants wouldn’t be the successful franchise they are today without Mays and Bonds.

Mays was the National League Rookie of the Year when the then-New York Giants reached the 1951 World Series and was the regular-season MVP on the 1954 World Series championship team. His famous catch in Game 1 is still considered one of the greatest defensive plays of all time.

When the franchise moved to San Francisco in 1958, the centerfielder was a centerpiece of the new team in town. Mays became a star at the rise of the television age when seeing a Black person on TV was rare. Mays also became a star during turbulent racial times.

The face of the franchise should have been embraced, on and off the field. That wasn’t the case.

In illustrating that point, Bonds gives the documentary one of its best quotes.

“Willie’s gone through a lot of racial discrimination, even here in San Francisco, where San Francisco is probably the most un-racist part of the state you can imagine,” he said. “They’ll shut down anything for equality here, which I really respect and love. But at one point, Willie did go through that.”

While San Francisco has a reputation for being welcoming, back then it wasn’t as welcoming to Black people. No matter how famous. Say Hey, Willie Mays! recalls how Mays became one of the most high-profile victims of housing discrimination.

The owner eventually sold Mays the home over the objections of the neighbors. As former San Francisco mayor Willie Brown says in the documentary, that helped ignite a movement to integrate San Francisco.

As much as that hurt, it might have hurt more to hear criticism from the legendary Jackie Robinson. Robinson publicly called out Mays, accusing him of not doing enough for the civil rights struggles of the 1960s. Most Americans heard plenty from activist athletes like Jim Brown, Muhammad Ali, and Bill Russell. Robinson wondered about Mays, even calling him a “do-nothing Negro.”

It was an unfair attack. Say Hey, Willie Mays! highlights many ways that Mays worked, sometimes behind the scenes, to improve the lives of Blacks. The 91-year-old Mays doesn’t address the fallout with Robinson in the documentary, but several people rushed to his defense.

Among those was Brown, who spoke of the special burden of Black athletes.

“Black people have imposed upon them the dual responsibility to not only represent all Black people but to make it comfortable for even some racists to interact without ever accepting the racist response: ‘You’re OK, but the rest of you are not.’ That’s kind of the way Willie Mays was treated. He became OK, but the rest of them were not. … We are all not going to be Muhammad Ali.”

Say Hey, Willie Mays! makes you consider tough questions. What does it mean to be an activist? What is acceptable activism? Are famous athletes obligated to do more? HBO probably could have done a 2-hour movie examining those topics.

But this is a sports documentary. Ultimately, the legacy of Mays is that he was one of America’s greatest athletes. Even Mays says in the film: “When I look at myself, I think about sports first.”

Mays, a two-time MVP, played a significant role in making major league baseball on the West Coast matter. Not just as a player. He influenced Bonds to sign with the Giants as a free agent in 1992. Bonds’ excellence led to the team getting a downtown home. Oracle Park, built in 2000, is still one of the top venues in the sport.

Yes, Mays is a Hall of Famer. Say Hey, Willie Mays! explains why he was much more than a five-tool player.

Say Hey, Willie Mays! will debut on HBO on Nov. 8 at 9 p.m. ET/PT, and will also be available to stream on HBO Max.