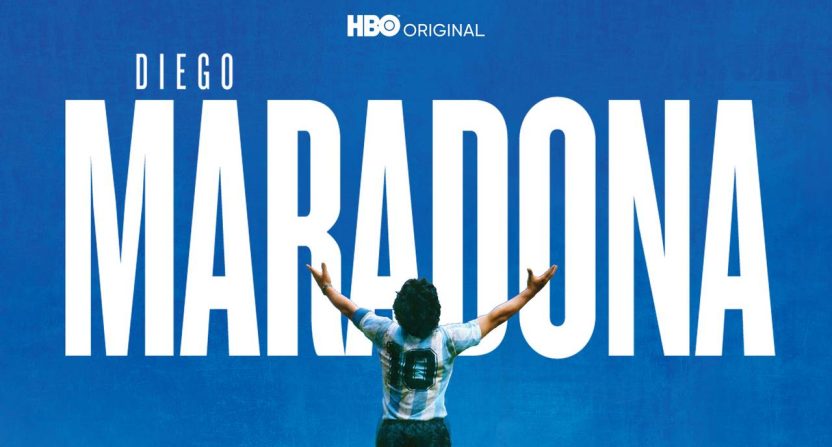 How do you say farewell to an icon? It’s a hard concept to wrap your head around. Immortals are supposed to live on. As one person said in the recently released HBO Max documentary on Diego Maradona: “I never believed he was going to die.”

Diego, The Last Goodbye is a moving but ultimately sad look at Argentine star Diego Maradona, one of the greatest soccer players of all-time. At the height of his popularity in the late 1980s-early 90s, he might have been the most famous person on the planet. Diego, The Last Goodbye focuses on the final years of life when he was a coach in his home country.

When Maradona passed away at the age of 60 due to heart failure in November 2020, there was an outpouring of emotion around the globe. In the middle of the COVID-19 pandemic, people who had been mostly isolated in their homes flooded the Argentinian streets to mourn their favorite son. To give you an idea of how immensely popular Diego was, consider this anecdote told in the documentary.

Maradona once asked someone to call a local radio station to request that it replay a song he liked. The person who answered at the station said they could not. When the friend said that he was with Maradona and this was a personal request from Maradona, there was at first dead silence and then doubt. The friend handed the phone to Diego who said, “Hello. How are you? Diego here.” At the other end of the line, all Maradona and his friend heard in response were people screaming, “Diego Armando Maradona!”

That’s who he was. Maradona was a bigger-than-life figure from the world’s biggest sport.

Maradona climbed out of poverty from the slums of Buenos Aires to become an international superhero. He was best known for leading Argentina to the 1986 FIFA World Cup championship, capped by a 3-2 triumph over West Germany in the final match in Mexico City. During the run, there was the infamous “Hand of God,” which turned out to be Maradona’s most iconic moment. On a goal scored by Maradona against England, it appeared that he illegally used his hand. However, the call stood, as well as the 1-0 lead. Argentina went on to win 2-1 in the quarterfinals.

An on-the-field controversy for a man whose life was defined by controversies off the field. He battled substance abuse for many years and was suspended 15 months in 1991 for testing positive for cocaine while playing for Napoli. He was also thrown out of the 1994 World Cup after another positive test for cocaine.

Diego, The Last Goodbye acknowledges his addiction and the role it might have played in his declining health in later years. But it doesn’t spend too much time dwelling on his shortfalls. Instead, it highlights Maradona’s compassion. That’s the story director Sebastián Alfie emphasizes. There’s a gripping interview with a woman who talked about how she met Maradona while both were in a rehabilitation center. The woman, who was battling depression, details how Maradona helped her tremendously. Another person said he was contemplating suicide until a visit by Maradona changed his mind. His players from the Argentinian club he coached prior to his death spoke fondly of him.

Maradona was widely charismatic and understood how to connect with people. Especially fellow Argentines.

“He never forgot where he came from,” said a person in the documentary.

Maradona’s life made it difficult to come to grips with his death. There are still questions. The documentary goes into some detail about his medical problems. He had also just undergone brain surgery prior to his death. Considering the number of professionals who were responsible for his care, many wonder if more could have been done. Last spring, seven members of his medical team were charged with involuntary manslaughter (only a therapist agreed to be interviewed for the documentary).

By far, the most powerful images from Diego, The Last Goodbye come from the grief-filled streets of Buenos Aires, where Maradona’s coffin laid in state. It’s remarkable. Thousands came to pay tribute to the man they called “El Pibe de Oro,” which means “The Golden Boy.” You saw people weeping uncontrollably as they left flowers, pictures, cards, and jerseys on his coffin. The number of mourners was so overwhelming that it led to clashes with police in riot gear. Many were angry when officials tried to shut down the wake and close off access.

But people refused to be turned away.