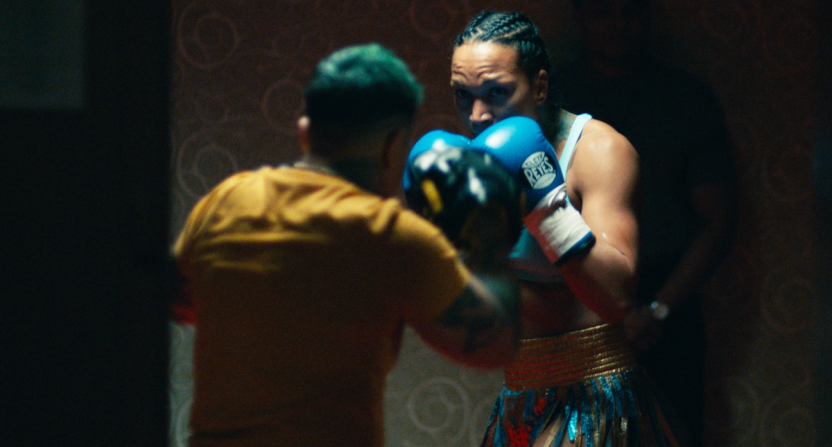 With so many boxing documentaries and biopics in the news recently, how about something on a fictional boxing film?

Calling Catch the Fair One a “boxing movie” might be a stretch. And it poses the question as to what makes a “sports movie”? Is a film like Uncut Gems, which involves professional basketball and betting, but isn’t actually about an athlete or event, considered a sports movie? Or does a sports movie have to tell a sports story, such as Disney+’s recent film Safety, about Clemson safety Ray McElrathbey.

The main character in Catch the Fair One is a former boxer and she’s played by professional fighter Kali Reis. However, the story doesn’t revolve around a boxing match. Based on the teaser trailer that was just released, the only boxing scenes might involve some workout or training. This is a thriller about someone searching for her missing sister, a pursuit that takes her deep into the world of human trafficking.

Check out the teaser trailer and judge for yourself whether this looks like a sports movie:

As mentioned, Reis is the star of the film and a real-life professional fighter. She has a career record of 17-7 with one draw, five of those victories coming via knockout.

Reis is a three-time world champion, winning the IBA middleweight crown in 2014, WBC middleweight title in 2016, and WBA super lightweight title last November. Her 2018 bout versus Cecilia Braekhus was the first female boxing match ever televised by HBO.

Catch the Fair One is directed by Josef Kubota Wladyka, who helmed 2016 Independent Spirit Award winner Dirty Hands (Manos Sucias) and has recently been behind the camera for TV series Narcos and The Terror. Mollye Asher, a producer on 2021 Academy Award Best Picture winner Nomadland, is attached to this project. And Director Darren Aronofsky (The Wrestler, Black Swan) is an executive producer.

The film will premiere at the Tribeca Film Festival June 13 with one showing available for streaming on June 14. It’s currently seeking a distributor for theatrical or streaming release.