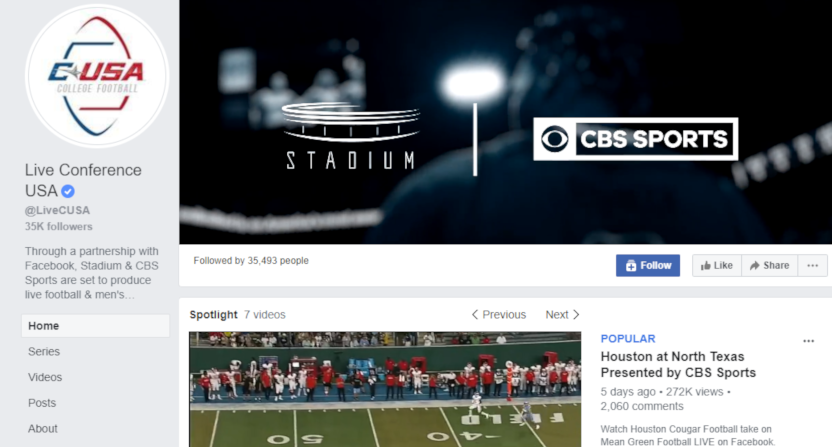 As part of the Conference USA rights deals announced in March 2018, rights partners CBS and Stadium are both producing some games that will only air on Facebook. One of those  games sees the Middle Tennessee State Blue Raiders host the Marshall Thundering Herd on Saturday (3:30 p.m. Eastern), and CBS is taking an unusual approach to broadcasting it. The Facebook games don’t have traditional commercials, so something else has to be used to fill that space, and CBS decided to use that to showcase a behind-the-scenes look at the broadcast.

CBS Sports brings viewers behind-the-scenes and into the production truck during breaks of a live college football game with “TV 101.”

…CBS Sports will have multiple cameras inside the truck and mic-up both the game producer, Bill Thayer, and director, Dan Reagan, providing viewers the opportunity to hear how the two roles communicate. During stoppages in play – when traditionally a telecast would go to commercial – sideline reporter John Schriffen will take viewers on virtual tours of the game production truck, showcasing the ins-and-outs, different responsibilities of those in the game truck and how decisions are made.

“The format used for games streamed exclusively on Facebook allows us the opportunity to experiment with ways to produce and deliver the game to fans,” said Steve Karasik, VP, Remote Production, CBS Sports. “As always, our priority is telling the story of the play on the field. But with this unique format, we are excited to give viewers a rare look inside the production truck. Not only will this enhance the overall experience and keep fans engaged, but we hope to provide viewers with an understanding of the depth, preparation and expertise that goes into producing a football game.”

This is a novel idea, and it’s one that might help get further viewers to at least check out this game. 2-2 Marshall and 1-3 Middle Tennessee might not be the most compelling matchup in the world to a wide audience, but recurring mid-game looks inside a production truck and mic’d-up commentary from the producer and director is a useful angle for those interested in sports media. There could be relevance there for those looking to get into broadcasting, or even just those who are curious about what happens behind the scenes of a broadcast. At the very least, it should be more interesting than a standard commercial break.

The Marshall-Middle Tennessee game can be found here Saturday. Kickoff is at 3:30 p.m. Eastern. Dave Ryan and Corey Chavous will call the game action from the booth.